Lawrence O'Donnell: "Every show we do offends my artistic sensibilities" 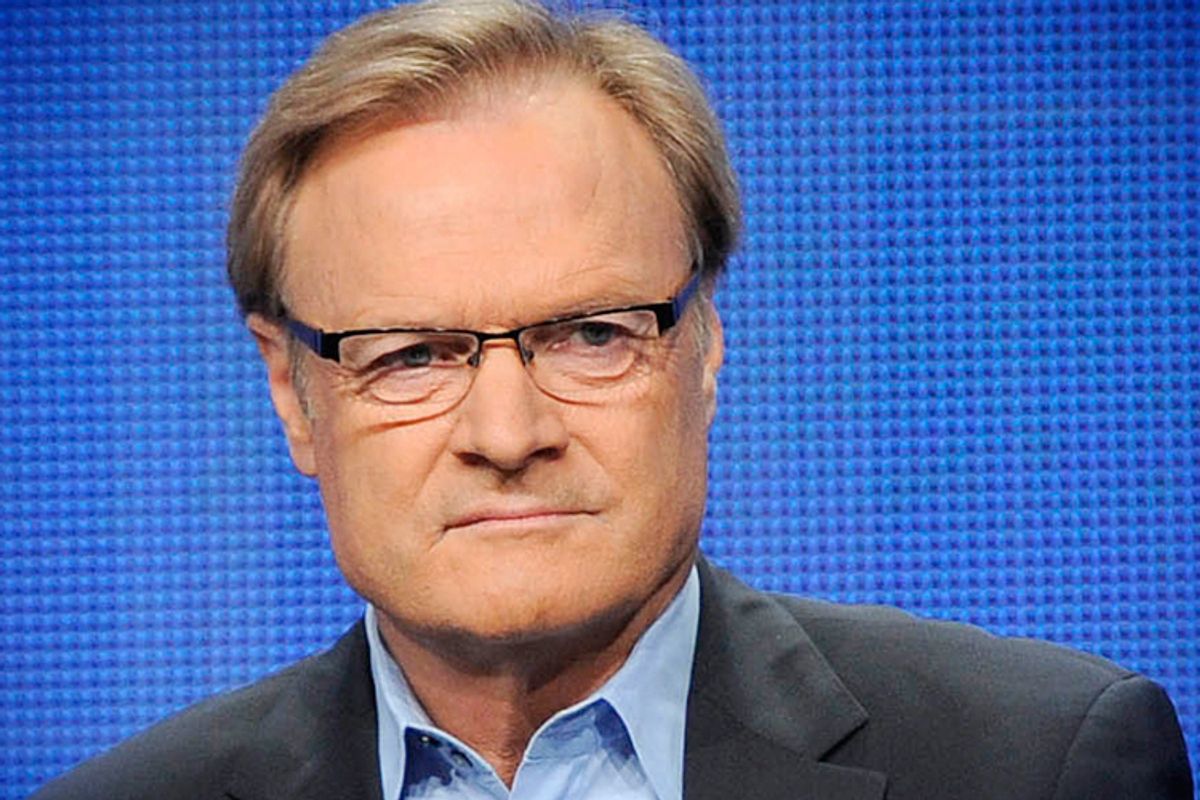 Lawrence O'Donnell is, even by the standards of MSNBC anchors, a busy guy. The host of "The Last Word" (which airs nightly at 10 p.m.), O'Donnell has long enjoyed a sideline career as an actor, appearing in the television series "Big Love," "Homeland," and "Monk," among others; he also served as an executive producer for "The West Wing."

The news anchor is about to hit movie screens in perhaps his highest-profile cameo yet, as a news anchor (for a generic news network, explicitly not MSNBC) in the action drama "Olympus Has Fallen," which depicts an attack by North Koreans upon the White House and features Aaron Eckhart and potential Senate candidate Ashley Judd as the president and first lady. We spoke to O'Donnell about his unusual career, why Jim Lehrer would never do what he does, and his future in Hollywood.

Why do you say yes when offered films? The director of "Olympus Has Fallen" told us that he'd reached out to many news anchors, including CNN's Don Lemon, and only you were able to do it.

Because I miss show business so desperately that I will do anything short of pornography at this point to hang around sets and have fun.

Do you try to import some of that moviemaking magic onto the set of your nightly show?

The comparison is tragic for me. What I'd love to have is a crawl at the bottom of the screen, reading: "You are watching an unrehearsed first draft."

Both of those things are just horrendous notions to me: To put something onscreen unrehearsed is just madness. To expose a first draft to anyone's ears other than your own is indecent. And we combine those two sins against good writing every night, and throw it out there. And so every show we do offends my artistic sensibilities in some ways.

It's the cruelest deadline I've ever been exposed to. All writers are forced to live within deadlines, and deadlines determine how good they can be. If you have five weeks to write an episode of television or seven months to write a movie or several years to write a book, each of those things is going to be better than a live television show. Luckily, the audience is apparently understanding, and they forgive much.

What compelled you to say yes to this film -- which has a pretty shocking, unbelievable plot?

The part of that script that appealed to me were my lines. That's all I know about that script. I haven't seen another page of that script. I only know what happens based only on the lines I read. It might be the only time I did a project like that where I did nothing but read my lines. It's a movie I couldn't possibly conceive of in my wildest dreams. I'm too grounded in reality. That's what the creative members of the Writers' Guild are for.

There's another one coming along with pretty much the same concept, with Channing Tatum. ["White House Down," another film about a coup in the White House, is set to be released this summer.] I got a call last week, asking, Would I do same thing in that movie? Would I do a newscaster thing about the White House being taken over? I said, Oh yeah, sure.

The day before I was going to do it, they discovered [I was in "Olympus Has Fallen"]. I'd forgotten about the other movie. It was filmed months ago. I would have alerted them to it. But maybe it'd be kind of funny -- this is the guy who pretends the White House has been taken over.

Do you worry appearing on television and in films might dilute your authority?

Luckily, I have no authority to lose, so there's no risk. At "The West Wing," I cast newscasters, and when you put out a casting call for actors, half of the people who come in are real local L.A. newscasters. Each time, I ended up hiring one of them, because they're better at it. Big surprise! A newscaster is better at playing a newscaster than an actor is. The truth is that most people who see this movie have no idea. They haven't seen ["Last Word"] before. You have to understand how tiny the audiences are are for cable news. Maybe one-seventh of the people who see Brian Williams's show see me. You could put me in movies, and most people wouldn't know who i am.

Does your audience on MSNBC, at least, recognize you in other roles?

If I were to judge it by the things I read on Twitter, people are constantly surprised to see I had previous careers. People continue to discover "He played a part in 'West Wing,'" or, "He played a judge on 'Monk.'" They mostly don't know it.

And there's been a strong move in the more traditional television news sources to avoid this. Tom Brokaw would never do it. He was asked to be in movies for 30 years, including by Robert Redford and other friends of his. And some news organizations put out edicts: "We will never do this." Jim Lehrer wrote that rule. I tried to get Jim Lehrer to play Jim Lehrer on "The West Wing." He respected his own rule, even though nothing in the script bothered him. That's something that's observed fairly strictly by that edge of the media. Brian Williams who is, by far, by many miles, the best actor in history of TV newsmen, has chosen things like "30 Rock" carefully. There's no credibility or authority at risk. It's comedy. Everybody knows at the outset that we're not pretending anything's real here. Were you to ask Brian to do a drama, I think he'd say no.

Given your love of scripted TV and movies, do you ever fantasize about acting full-time?

Actors fantasize about acting full-time. But no one acts full-time: it is not a full-time job. Fantasies about acting are linked to realities about mortgage payments and most people overcome fantasies quickly when that sets in. Here's what I think about me and acting: If I were to drop everything and pursue acting full-time, I would qualify for every anti-povery program out there. I'd work the same number of days a year I do now in acting: three or four. And that's what my talents would deserve. The main reason I've done it is that it fascinates me to be on other people's sets. It fascinates me to see how it works. I know how everything works on "The West Wing" -- then I play a part in an HBO movie and say "That director of photography is brilliant and that assistant director is incredible and gracious and so thorough."

And I go to "Monk" and see how they organize things at "Monk" and say, "This makeup trailer is better than ours." I study every detail an executive producer would study. It's a unique opportunity. No one gets to do it. It's the only way you can visit other people's productions. I'd say, "I want to work with that director." I'd write down names on who's great at what in other productions.

Then, there's this thing that's recurring in my life choices. a certain Plimptonian aspect to the way I do things. George Plimpton used to think, "I'm going to write about football, so I'll just go to the Detroit Lions training camp as a player. I'm going to get in the uniform, run plays, and write a book about it." It's a first person account about being a football player by someone who isn't. I am not an actor. There's a bunch of things I've done that I'm not. But I've done them in a Plimptonian way. I will know more of what it is to be an actor and that is crucially important to me as someone who's employed actors and will employ actors in the future.

Lastly: any advice for Chris Hayes, who will shortly be moving from weekend mornings to prime-time on MSNBC?

My dark secret is that I have had more shows cancelled on MSNBC than anyone in its history, and I made sure we never had press releases announcing them in the first place. I made a couple of deals where I would do Saturday to Sunday from 6 to 8 p.m. I was first person to do [the] MSNBC weekends.

But I don't know. I don't really -- I don't know what I'm doing. I have no advice for how to do this stuff. I think what has worked very well is Rachel Maddow just being Rachel. I don't think there's anyone who could give Rachel advice about anything. She just came in and just did the show she wanted to do. And it's the biggest hit the network has. I make it up every day.

I still don't get this kind of television. I don't. And it's not a business that I feel I have a working understanding of, unlike prime-time commercial entertainment television or HBO and Showtime. I understand completely what they do, and I want to do what they do. But on a news show? I have no advice for anyone.