Why can't I hate "The Americans''' Elizabeth Jennings?

Keri Russell's KGB spy on "The Americans" is the most merciless character on TV. Even so, she has us in her thrall 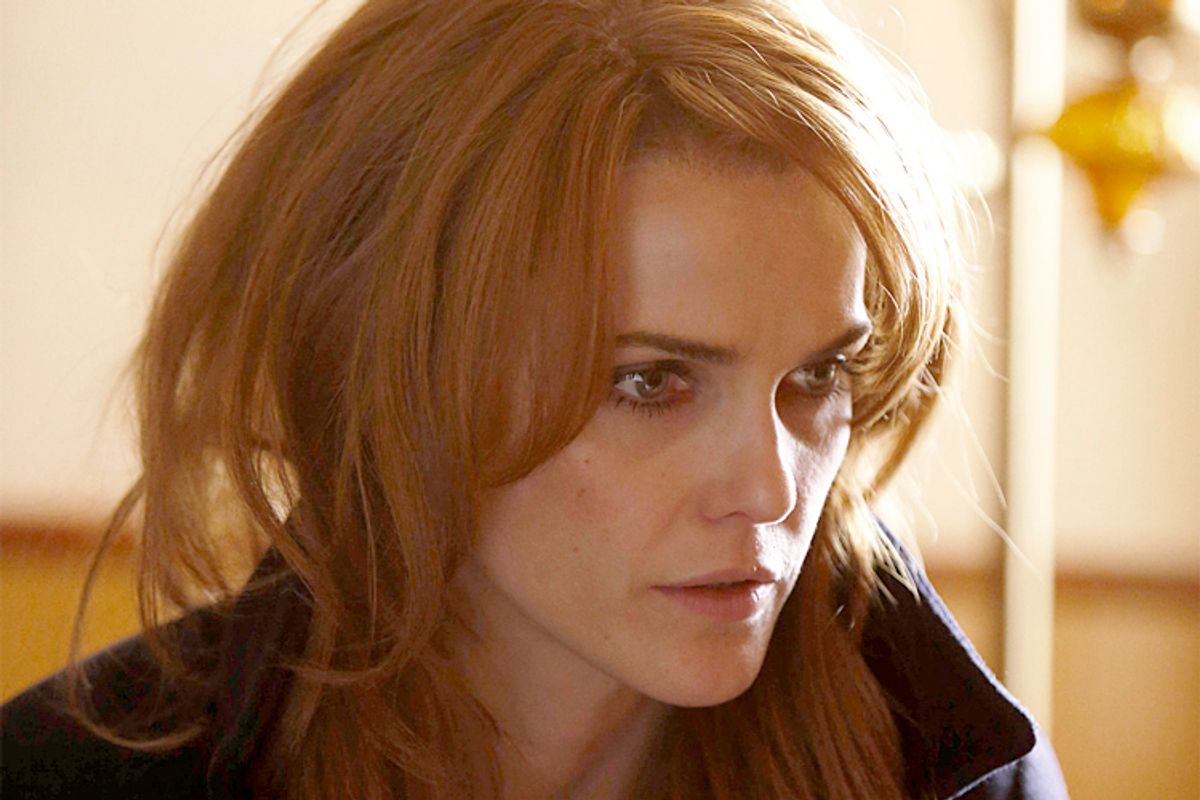 Likability, well on its way to becoming a dirty word, is on everyone’s lips these days: Why aren’t Anne Hathaway and Taylor Swift likable? Why are Jennifer Lawrence and Mila Kunis? What does it matter if Hannah Horvath or Amy Jellicoe is unlikable, so long as they are interesting? Why are women, both real and fictional, constantly being assessed for likability while men doing similar things get a pass? And what is with our current, not gender-specific cultural obsession with the unlikable anyway? And with making the unlikable lovable?

Into this minefield soldiers the formidable Elizabeth Jennings (Keri Russell), the star of FX’s great “The Americans,” a woman who is colder, fiercer, more aggressive and more zealous than any other on TV and the only one of whom is a devout Communist spy. In the most recent episode, Elizabeth sat on a bench with her handler, a woman (Margo Martindale) whom she had beaten senseless just days before, rigid with unforgiveness. “I’m sorry I didn’t kill you. That’s my apology,” Elizabeth snapped. Elizabeth detests vulnerability and loss of control. She’s furious and uptight. When she's hurt, she lashes out, both physically and emotionally. She is a high-level, ideologically dedicated asset of the USSR and yet, despite this, she — unlike many of the law-abiding, vulnerable, loquacious, malleable women she shares a medium with — is a magnet for my sympathy and decidedly not a magnet for hundreds of pieces about how detestable she is. What is going on here?

Russell was cast against type in this role. As the star of “Felicity,” she was a warm, searching, well-intentioned, sweater-wearing co-ed. It seems like there are not enough sweaters in the world to keep Elizabeth warm. But traces of Felicity Porter are innate to Russell — or rather, Russell’s gestalt was innate to Felicity Porter. No matter who Russell plays -- however tamped down or effusive she becomes, how cruel or concerned she is, whether she’s dealing with KGB agents or Ben and Noel -- she vibrates, at a very low frequency, with concern and vulnerability. Even Felicity was never carefree. As tough and accomplished as Elizabeth is, she is perpetually burdened. She worries for her country, for her children, for their safety. Every night, unlike her husband Phil, she goes to sleep futilely wishing to wake free of worry. A hairline crack of anxiety runs though Russell’s Elizabeth, and it keeps her from being either a robot or a triumphalist.

In its short run, “The Americans” has been spectacular about gender and sexual power dynamics, and specifically about the power, and also debasement, that comes in using oneself, or being used, as a sexual weapon. We learned in the first episode that Elizabeth was raped by one of her training officers, a fact that did not turn her against the KGB but which did shut her down emotionally, with long-term ramifications on her marriage and her ability to think of her body as a tool (and, also, on our sympathy for her). Elizabeth, along with her husband Phillip and Nina, a Russian office worker who has been turned into an FBI asset, regularly uses herself as a honey-pot. That’s how we see Elizabeth in the very first scene of the very first episode — seducing a source in a cheap blonde wig and then later removing it in the car, tired, dirty, angry.

Elizabeth’s willingness to use her body, her almost-but-not-quite complete numbness to it as an aspect of the job, speaks to her freakish competence (also to some unhealthy compartmentalization). Competence is, to my mind, one of the X factors of the TV likability debate: Where competence can be found, hatred hides. Elizabeth’s most obvious peer is “Homeland’s” Carrie Matthison, who is much more unhinged and volatile — all fire to Elizabeth's ice — but similarly consumed with cause-and-effectiveness. “Scandal’s” Olivia Pope, a workplace savant, and “Parks and Recreations'” implacable, adorable Leslie Knope are also both supremely capable and have largely side-stepped the likability trap.

In comparison to these women, the more controversial Hannah Horvath, her friends and “New Girl’s” Jess Day are lost whippoorwills. They are barely competent at the basic tasks of living, let alone at their jobs, which they mostly don’t have. “Enlightened’s” Amy Jellicoe has been more successful, but she's done it the hard way: No one on television makes the basic act of getting through the day look more fraught. And though Amy ultimately triumphed in "Enlightened's" just-finished season, it felt against the odds: Only after she brought Abaddon down did it seem possible that she could do so.

But Elizabeth, Carrie and Olivia -- like “Alias’s” Sydney Bristow and "Buffy the Vampire Slayer's" Buffy -- have more than competence on their side: They also have plot. “The Americans,” “Homeland,” “Buffy,” “Alias,” even “Scandal” are all action shows — chasing bad guys and good guys, completing missions, cracking cases, spying, stalking and staking are all regular occurrences. The characters’ psychology matters, but for long stretches it comes second to story.

So although these women are literally the ball-busters of television — the ones visibly, often physically, upsetting and destabilizing the status quo — they are also the ones obeying a rule of TV: do high-stakes stuff. It’s the sloppy, less fantastical characters, the ones regularly flouting that TV rule, who have viewers in paroxysms of irritation: Why should we be wasting our time watching these regular-grade messed-up women? (Related: The only women who come in for it more regularly than twentysomething navel-gazers are the ones, like Skyler on “Breaking Bad” or Carmela on “The Sopranos,” who seemed to be “interfering” with the action.) This is an odd reversal on how these two types of women are greeted in real life. Intimidating, successful, original figures like Hillary Clinton and the real-life Lena Dunham make everyone crazy, while the girl who just got out of her PJs in Brooklyn gets a smile if she gets any notice at all. Context determines harmlessness.

Elizabeth Jennings is fearsome and unforgiving and emotionally fakakte — and she is enthralling because she is those things. On paper, there is no one less “likable” than her, a woman who is trying to bring down the American government, who can barely tell her husband she misses him, who doesn't like ice cream, who holds a grudge forever, who is scary and violent and thinks you, watching TV from the comfort of your American living room, are weak and spoiled and soulless. But through an alchemy of acting and writing and plot, she's got my sympathy. How does that song go? What’s like got to do with it?