"The New Mind of the South": Not your daddy's Dixie 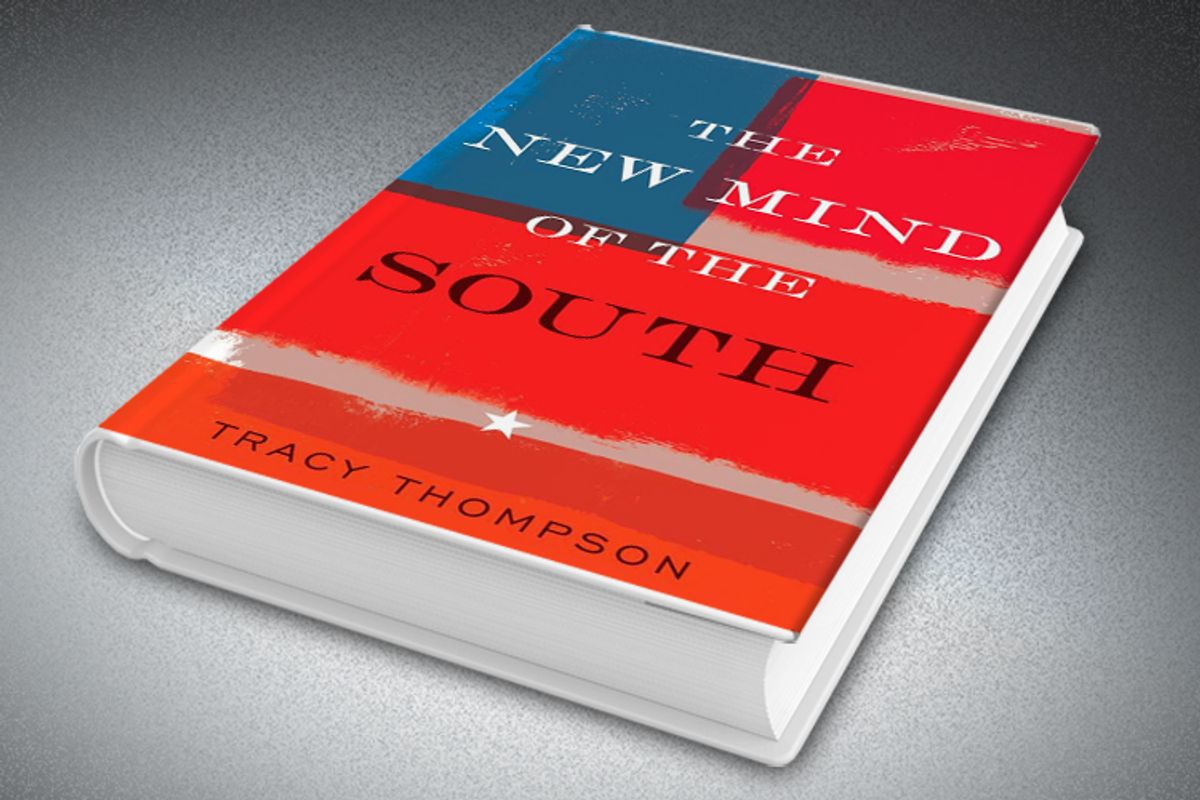 Tracy Thompson, a former newspaper reporter born and raised in Georgia, first got the idea for her book, "The New Mind of the South," when a cousin passed on a startling bit of family history. Their shared ancestor, Thomas Thompson, was a Union man. Thompson clan legend held that Thomas had briefly pretended to support the Union, but only because he hoped to be reimbursed for property confiscated by General Sherman. Thomas was in truth a staunch anti-Confederate according to documents held in the National Archive. Furthermore, he wasn't alone; Thompson found two dozen similar cases from the same small county when she visited the archives herself. "I'd always wondered why, unlike every other Southern family I knew, ours had no Civil War stories, " she remarks.

For Thompson, this experience captures the "mismatch of history and identity that so many Southerners up through my generation have had, this vague sense of cognitive dissonance that comes with growing up in a world where nothing you see around you quite fits with the picture of history made available to you." It also conjured up memories of a far more disturbing revelation: the time she learned of the horrific 1899 torture and murder of a young black man 10 miles from the house where she grew up. That, and six more lynchings in counties within "the borders of my childhood universe," were news to her despite the fact that "there was no shortage of people in my childhood who were happy to regale me with stories about the Yankee soldier buried under the muscadine vines, the privations their family endured during Reconstruction," and other local lore. Needless to say, her school textbooks, bowdlerized for the Southern market, ignored the subject as well.

"When your past changes, your identity changes," Thompson writes, and "The New Mind of the South" offers her account of the metamorphosis she has witnessed in her beloved homeland. Some of those changes are demographic, such as the huge influx of immigrants over the past two decades. North Carolina, for example, saw its foreign-born population grow by from 115,000 to 614,000 in the 1990s alone. Latin Americans make up the majority of these new Southerners (even if most of them wouldn't necessarily call themselves Southerners), but immigrants also come from Vietnam, Pakistan, China and India to work in factories and on farms. It's a shift that has not so much transformed the classic black/white Southern divide as turned a simple binary model into a protean three-dimensional intimation of the future.

Thompson, a writer who lopes easily from the dispensing of statistics to shoe-leather reporting to touching autobiography to impressive flights of moral reflection, makes an ideal guide to this landscape. Cruising through the nearly deserted countryside of the Mississippi Delta region, she considers the effect of mechanized agribusiness on what for many Southerners is the foundation of their sense of self: their relationship to the land, specifically to a way of life rooted in rural communities. It's one thing to read a reporter's observations of boarded-up storefronts and stoic small farmers lamenting that they never run into anyone they know at the post office. What Thompson can also offer is a series of radiant images from her own childhood: eating eggs from her grandfather's chickens, drinking water pumped from their own land and watching her mother roll out biscuit dough, all to the accompaniment of endless talk: stories, gossip and just plain passing the time.

Yet Thompson never forgets what was left out of all that golden talk, and this gives "The New Mind of the South" a muscular tension that a merely nostalgic memoir or a self-effacing work of reportage could never achieve. She vividly recalls the embracing evangelical church life of her 1960s youth, when the religion was "otherworldly and apolitical" and therefore a marked contrast to the activist fundamentalism that arose in the 1970s or the show-bizzy extravaganza of a megachurch she visits in suburban Atlanta. Yet the latter, an outpost of the "prosperity gospel," turns out to be more multiracial and feminist than she expected. Such churches can't provide her with the comfort she once found in the small church where her family used to worship, but that doesn't mean it isn't doing some good.

The best chapter in "The New Mind of the South" (the title of which is taken from W.J. Cash's seminal 1941 survey, "The Mind of the South"), concerns the city of Atlanta, a booming metropolis straining at its seams, where whites are a minority and the poor still get short shrift. Thompson doesn't live there anymore, and when she tells you about the traffic, the sprawl, the free rein given to business interests and the racial mistrust that scuttles every attempt to create vibrant public spaces, you can hardly blame her. Yet she's still invested in Atlanta, still finds memories on many street corners and still believes that it constitutes the most genuinely "biracial" city in the nation. She understands it deeply enough that when she resolves this chapter in an indictment of the Atlanta's "pretense," the result is a magnificent and stinging piece of writing.

"I find it tragic that Southerners, who are so in love with their own history, are so careless and so willfully blind about which history they choose to love," Thompson writes in the conclusion of that chapter. But she also believes this is changing. She talks to people who have sought out relatives of other races and are inviting them to family reunions; to African-Americans who are returning to the region from the West and North in droves; to the teenaged, Southern-born kids of Latino immigrants who love "Gone with the Wind;" to an architect hired to bring the ideas of "new urbanism" to Atlanta's suburbs; and to small towns seeking to revitalize their economies by attracting "civil rights tourism." At last, she asserts of the long-denied past, "we are far enough away from these events to see them with some dispassion, but close enough to still feel the horror."

What "The New Mind of the South" has to offer a dyed-in-the-wool Dixiean I cannot say, but for this outsider it offered illumination on every page. Thompson can sure turn a phrase (a favorite: "Coca-Cola president Robert W. Woodruff -- Atlanta's version of Cardinal Richelieu"). What she wants is to "express my deep love and respect for the South without pandering, apologizing, subscribing to racist delusions or drinking anybody's Kool-Aid," and she succeeds. You come to feel her longing for "that deep sense of community and an almost tribal definition of kin" and to hope that her people can find a way to hold onto it even as everything that once seemed to define that community -- the land, class, race, religion and even the past itself -- is undergoing great and inevitable change.