The verdict isn't the end of the story. Here's what we must take away from the teen rape case still rocking America 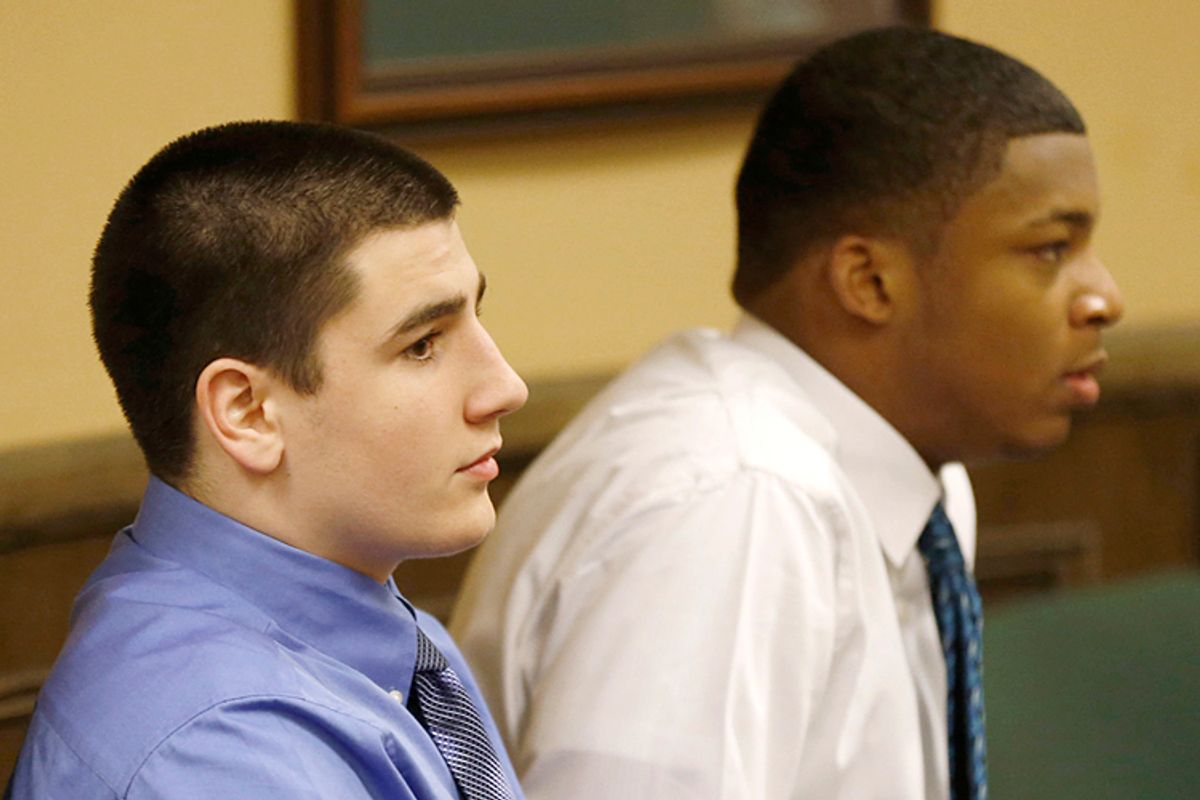 Thanks to a trial overseen by a juvenile court judge, justice in Steubenville was administered remarkably quickly. On Sunday morning, Trent Mays and Ma'lik Richmond were found delinquent of the rape of a sixteen-year-old girl, for which they will serve, respectively, a minimum of two years and one year each. But this isn't the end of the story, which went national with the help of Anonymous but was truly laid bare in the four days of testimony last week. The only unique aspect of the story was its prominence and the abundant, inarguable recorded evidence, so it's worth taking stock of what those factors tell us about rape in America:

1. They thought they could get away with it. The release of text messages sent that night and immediately afterwards make it clear that at least some of these kids, particularly Trent Mays, knew what had happened was wrong. It's just that they had reason to believe they would operate with impunity. One teen texted Mays the next day, "You're a felon." Mays subsequently said, "I shoulda raped now that everybody thinks I did." (He had at one point said he'd had intercourse with the girl, then said he didn't; digital penetration is rape under Ohio law.) But Mays' damage control is telling: In a text, he referred to football coach Reno Saccoccia: "I got Reno. He took care of it and shit ain't gonna happen, even if they did take it to court." Mays also said that the coach said that next time they got into trouble, they'd be suspended for three games.  "But I feel he took care of it for us," Mays wrote. "Like, he was joking about it, so I'm not worried." Unluckily for Mays, the coach wasn't quite as powerful as believed.

2. The bystanders could have prevented it. One of the witnesses, Evan Westlake, wasn't drunk, and when he realized one of his friends was too drunk to drive, Westlake tricked him into handing over his keys. Yet as Yahoo News' Dan Wetzel points out, Westlake didn't think to intervene in the same way when he saw the girl passed out on the floor being violated by Mays and Richmond. (On Sunday, Ohio Attorney General Mike DeWine said he would ask for a grand jury to investigate whether there would be further charges.)

The national expert in bystander intervention, Jackson Katz, told the Daily News, "I assume there were people in that room who were uncomfortable with what was going on, but they were silenced by the dominant ethos of their culture. Nobody spoke up. If you are a teammate and you really have someone's back like you say you do, you would have intervened before they committed a crime." There was one exception, after the fact: Sean McGhee, Richmond's cousin, who testified against him. He had been at the party early in the night and then learned about the sexual activity from the photos and texts. "You are dead wrong," he texted his cousin. "I'm going to choke the [expletive] out of you for that. You could go to jail for life for that." Of course, by then it was too late.

3. Education about rape and consent needs to happen, and earlier. Westlake's rationale for failing to intervene was that "It wasn't violent. I didn't know exactly what rape was. I always pictured it as forcing yourself on someone." If Westlake truly believed that, as Katz put it, "The failure of adult men's leadership is a primary factor in this case... How many athletic departments have mandated sexual violence education?" Much of what exists tends to happen in college and tends to be aimed at women. A report on rape prevention by the National Resource Center on Domestic Violence notes, "The data suggest that first sexual experiences typically occur at a much younger age, that a notable percentage of these first experiences are forced, and that sexual and physical violence occur at alarming rates among middle school and secondary school students."

4. Even now, victim-blaming is all but inevitable. The equivalent of a conviction doesn't mean the girl's suffering is over. If you need evidence of that, check out the Public Shaming Tumblr,which includes social media commentary like, “Be responsible for your actions ladies before your drunken decisions ruin innocent lives.” Closer to home, two of the girl's friends testified against her, calling her a liar and saying they were no longer friends because she had insisted on staying out that night. The victim's attorney told the press, "The mom and the daughter and the family want people to know rape's not acceptable conduct." On Sunday, the legal system recognized that. But the broader culture still has a long way to go.