"Gamers" are not the enemy 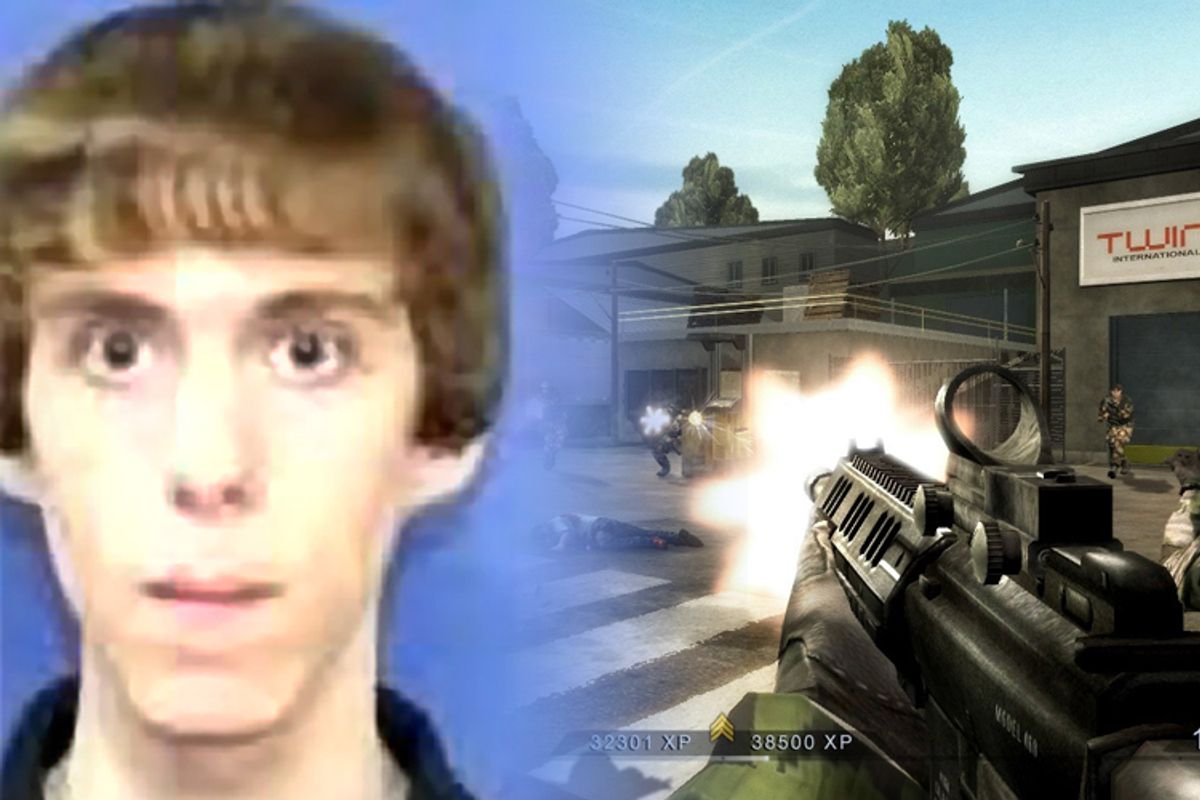 Oh, those sick, twisted "gamers." How will society survive their foul stain?

On Monday, the New York Daily News' Mike Lupica reignited the ever-popular "do video games cause mass murder" debate with a story bound to send young American males into a furor of rage and spitting madness. (That is, if they weren't already in that state after their most recent weekend-long marathon session of "Call of Duty: Black Ops 2.")

Lupica quotes at length the hearsay account of an unnamed law enforcement "veteran," who seems to take special care in enunciating the word "gamer" with the hatred and disgust that one might normally employ for "child rapist" or "genocidal totalitarian dictator."

"There really was no other subject matter inside his head. Just this: Kill, kill, kill. It really was like he was lost in one of his own sick games."

"They don’t believe this was just a spreadsheet. They believe it was a score sheet. This was the work of a video gamer, and that it was his intent to put his own name at the very top of that list."

And so on. The "work of a video gamer." The "code of a gamer." Reading Lupica, you get the sense that the population of the United States has been split into two categories: normal, sane, law-abiding citizens, and gamers, who are kind of like homicidal zombies, except not dead, yet.

Before I go further, some disclaimers. I am the father of a 15-year-old teenage boy who proudly considers himself a "gamer." He seems to me about as likely to commit mass murder as House Speaker John Boehner would be to endorse a 90 percent tax rate on American millionaires, but I will acknowledge having felt qualms while watching him play some of the exact same first-person shooters that we know Adam Lanza enjoyed. They are ultra-realistic, extraordinarily gory, and place a premium on death and mayhem. As a parent, and a former avid gamer myself, I am always struggling with how to set the proper limits on screen time for my son or how to decide what forms of visual stimulation are appropriate or out-of-bounds. (When is watching "Kill Bill" with your teenager fun, instead of creepy?) Although the research attempting to find links between video games and violence is sketchy and contradictory, it certainly doesn't seem impossible to me that extended immersion in contemporary state-of-the-art first-person shooters could have a desensitizing effect on a subset of the gaming population. And if you're already mentally ill to begin with ...

But after reading Lupica's article I spent an hour or so reviewing recent press reports sensationalizing Lanza's video-game "addiction" and I couldn't find a single one referencing the numbers that should be the starting data points for any discussion of "gamers" and violence.

Over the past 20 years, all forms of violence in males aged 10-24 have declined. That includes homicides, non-fatal assaults and bullying. The Centers for Disease Control has some of the data. You can also find some interesting charts here. The bottom line: Over the same period that sales of video games exploded, and an entire new generation of "gamers" emerged, youth violence fell. The drop was most striking from 1991-2000 -- since then, as far as I can tell from the available data, the trend line has been flat.

According to the CDC, "Homicide rates for males, ages 10 to 24 years, declined from 25.7 per 100,000 population in 1991 to 15.3 per 100,000 in 2007." Now there are surely factors influencing that drop that have nothing to do with video games, but judging from that one statistic alone, logic would dictate the conclusion that playing video games has been beneficial to society instead of the reverse. Certainly, a massive increase in hours spent video gaming has not resulted in a rising murder rate.

The next step, if you are looking for a smoking gun, is to ask what would be more likely to directly aid Adam Lanza in his quest to commit mass murder: the "training" he received from video games or the training and access to actual, physically real firearms given to him by his own mother? What's more scary? That Adam Lanza locked himself in his blacked-out bedroom playing violent video games at all hours, or that a mentally ill young man had easy access to an AR-15 rifle in his own home? Talk about bad parenting!

It is absolutely folly to tarnish an entire generation of gamers with Adam Lanza's sins and his mother's awful parenting. And yet, we see it happening in the culture at wide more and more often: "gamers" spoken of as the alien "other," "gamers" seen as just one step away from a killing spree.

It's all so predictable. The old are always wary and suspicious of the passions of the young, whether it's rock 'n' roll or comic books or drugs or, now, video games. Something's happening here ... and we don't understand it, which means we're automatically terrified of it.

Of course we should be wary! I wonder all the time about the potential impact of new technology on society. There is no doubt that kids today have access to forms of media that are more distracting and immersive than anything we've seen yet in history. There will be implications, for politics, the economy and entertainment. As parents and a society we should be watching what's happening like hawks, ready to pounce at the appropriate opportunity.

But as soon as we invest a term like "gamer" with scorn and fear, as soon as we start labeling an entire class of young people as malign and alien, we not only make the mistake of ignoring the available data, but we're losing the battle to understand and adapt to and guide what's happening before we've even begun to fight. Adam Lanza might have been a gamer, but that doesn't mean "gamers" are any more sick or twisted than society at large. Gamers are us, or at least, who we would be if we'd been born in the last 20 years. Most of us are just fine. Some of us aren't. And some of those of us who aren't have unfortunately easy access to unbelievably potent killing machines. So what's the real problem, here?