Iraqi professor: "Life became like a slow film in which everyone dies"

What has the last decade been like in Iraq? Explosions, rubble and the feeling that a gun was always at your head 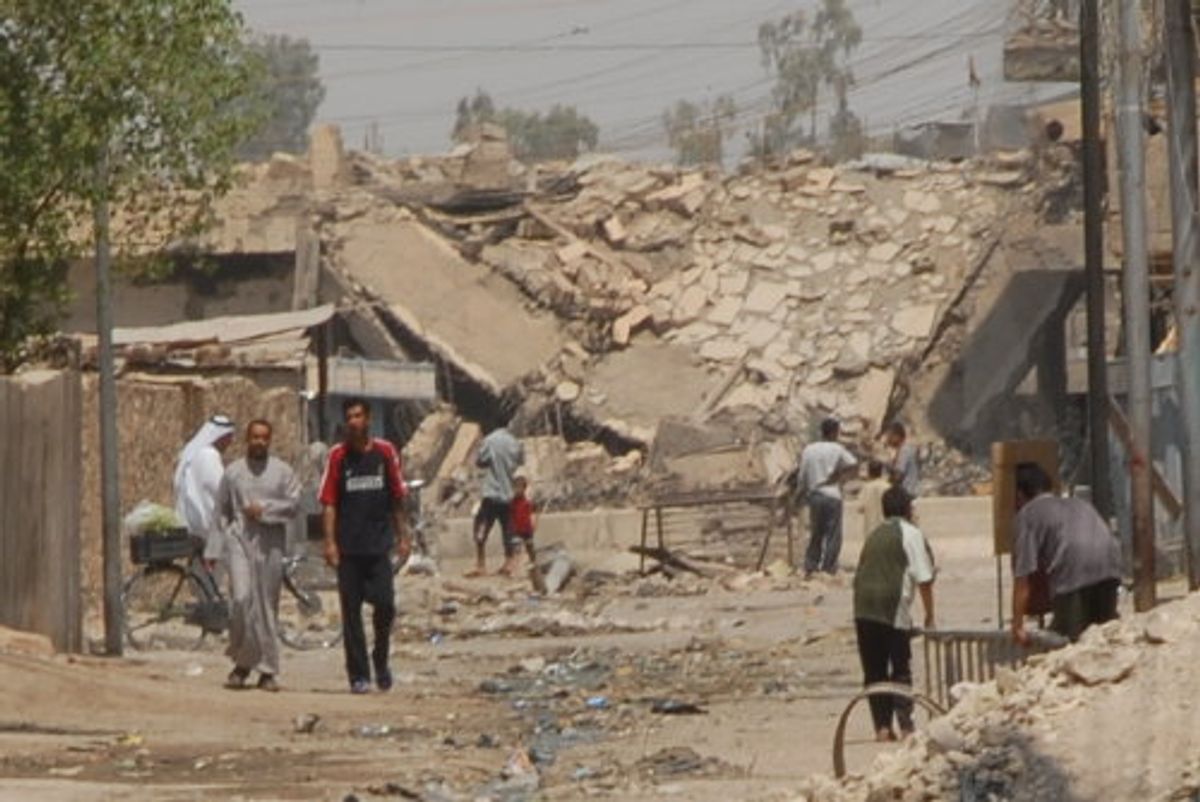 There is something curious about narratives on Iraq. They are always about a war or some catastrophe. If you were to reduce all these narratives into an Ur-narrative the result would be a universal tragedy of human folly. In such narratives, war ends only to give birth to another, ad infinitum. So why do I keep bothering myself with such big issues? I am no Cultural Policeman. After all, neither did I choose to be here, nor was I given the privilege to avoid witnessing this nightmare. Yet, there I was, a little man attentively listening to the roar of history silently sweeping over the ruins of a country forever doomed to be conquered by the nations of the earth, past and present.

Back in 2003, the madness and magic of the times had just broken loose after the dramatic Hollywood-like toppling of the dictator's statue in Baghdad and the endless chain reaction it started. Suddenly, we were faced with the full dread of that moment of existential impasse: the evaporation of the regime and all its apparatuses. Imagine that you wake up one fine April morning to find that all the cops, soldiers, Baathists, officials – everyone down to traffic officers and street sweepers vanished with a slight gesture from the hand of a mighty Yankee sorcerer. In truth, they simply left or took to hiding, fearing revenge or the impending meting out of American justice. Khaki clothes and weapons abandoned on streets were common sights, but they did not compare to the arresting scenes of children playing on abandoned ordnance and tanks. The thunder of air raids was silenced, except in the restless dreams of those same children.

What was on my mind at these crucial moments is a conflation of two scenarios: the Orwellian Animal Farm and the Sheep without their Biblical Shepherd, for chaos was lurking. The first scenario was not uncommon in modern Iraqi political history while the horror and anarchy of the second scenario were still fresh in our minds when the regime's grip slackened on the southern and northern zones of the country after the American liberation of Kuwait in 1991. But chaos was inevitable when Baathists and corrupt officials started to loot and burn governmental offices.

It is precisely at this moment that the Iraqi paradox started: the need for the invaders to protect us from ourselves. Fascinating, the invader has turned into a much-needed savior. So this was a strange moment when the occupation turned for many Iraqis into an occu-salvation. But for me it was an occu-liberation as it shook the last vestige of our decency as human beings only to unleash the wild animal in us. The eyes, faces and arguments I used to pass by in the dusty streets of Ramadi each afternoon against the apocalyptic images of the distant smoke pillars rising silently from several places in the city broadcast an all too clear message. “Let them come in,” begged the toothless old women, implored the faces of children, argued the minds of those trying to hold together their families.

The first American tank to roll along the main street of Ramadi that memorable warm afternoon was not hailed with olive branches or candies as the case in Baghdad or the South. It was, quite unexpectedly, hailed with a storm of slippers from the ever angry residents. (Historians are now convinced that the famous shoe thrown years later at President Bush in Baghdad is the offspring of these flying slippers.) Yet, the day was never marked in the public memory for its flying peaceful slippers. It was, instead, remembered henceforth as the day of sore feet as the future attackers had to walk home barefooted.

Leaning pensively on the gate of the big mosque, my sweaty hand clutching a slim volume of Whitman's poetry, the images of the stupefied Marines perching on their metal monsters had attacked my unprepared mind without even coming through my bobbing eyes. "We are here to help you," pleaded the soldiers, in vain. I could understand the fury in my people's eyes but never have been able to know the fear in the soldiers' faces. DISILLUSIONMENT: the page-size word I inscribed hastily in my journal.

In Iraq, time runs smoothly like a dream on the sand of human existence. The next few months, running from the end of 2003 into 2004, were rare moments of idyllic peace and stability, especially with the advent of such novelties as the cellphone and satellite receiver. Salaries rose considerably and the bulky middle class of employers and employees lived up to the spending and buying sprees. Money, dollars, marriages, spending defined the atmosphere of Ramadi’s central market and other Iraqi cities. Cars of all types (mostly secondhand) drowned our fading streets. The Coalition forces forgot, or deliberately overlooked, to secure the borders and, therefore, we were no country on the map. As if Iraq ceased to exist as a country. It was a kind of a liquid demographic mass on a piece of land no one dares to call a home for densely black clouds were rapidly gathering on the horizon. Amid all this fetishism I had a premonition that these were the last days I could enjoy sunrises and sunsets. I was afraid to write this in my journals lest it came true.

Our relations with the Yankees were never good. It was like an awkward tango during which the dancers keep stepping on one another’s toes without ever apologizing. This particular negotiation of space turned into a primitive blood dance. Among the laymen, there was a sharp escalation in the traditional rhetorical discourse of Jihad and the holy duty of expelling the invaders. Due to the Americans’ open-border policy, many armed organizations, mostly Islamic extremist ones, were bloating with money and pouring into Iraq. The rapidly widening sectarian schism was catalyst for the emergence of such organizations. Recruiting was easy in this atmosphere saturated with the ecstasy of death rhetoric, violently provoking the fundamentalist imp inside us.

I can't date exactly when the fight started, but in Ramadi, sometime during the early months of 2004, explosions and firefights filled the days and nights with increasing regularity. The Americans were clearly not ready for this kind of war. They were accustomed to being attacked in the same place, responding to patterns accordingly. They couldn’t even name the enemy. Each time they searched our houses or places of work they came up with different names: Baathists, then Agitators, then armed people, then Terrorists, then Mujah, and, finally, in one Marine's words: "You the Enemy."

The ambush techniques sprung on the Americans started to vary with increasing complexity as more and more weapons came over the border. Mortars and missiles were used but with no precision and with no regard for the innocent civilians. They – this mysterious enemy – killed far more Iraqi civilians than American soldiers and armed fighters. Death became ordinary daily news.

The clashes rapidly developed into fierce guerrilla warfare with both sides getting nastier. The Americans deployed concrete barriers, barbed wire and checkpoints. Snipers were stationed atop buildings. Houses were turned into barricades. The armed groups targeted the Americans by starting to use civilians as decoys. The Holy cause, which the armed groups extensively marketed to the simple-minded believers, became another Reign of Terror as the slaughter of innocent civilians was more than common. Survival became a sophisticated art on the streets of Ramadi. If you were spared by the American snipers you would definitely be slaughtered by Death Reapers, aka, the extremists. Pick any reason you like for the motivation behind these deaths: collaboration with the Americans, sectarianism, personal disputes, clothes, hairstyle – there was no logic, but there were ghastly results.

Kurt Vonnegut wrote: “There is nothing intelligent to say about a massacre.” The notebooks I kept between 2005 and 2006 overflow with the pain of the atrocities committed in Ramadi and Baghdad. I labeled this era as “Opel vs. Hummer.” I witnessed countless slaughters of innocents carried out by al-Qaida and death squads. It always started with some Opel pulling over conspicuously in broad daylight. Two or three armed madmen would stop some passersby and force them to witness an execution. Bear witness or be condemned. From the Opel’s trunk a man, sometimes two, always tied up and blindfolded, would be extracted, like luggage. Knives were sharpened and the slaughter started with Hallelujah. No one ever dared to intervene, let alone remove or cover the corpses. The few who tried were punished with death. The words in my journals still throb with the sight of the gushing blood, desperate gasps for air, and the rank smell of decomposing bodies left on the streets for weeks.

The American brand of death, signified by their Hummers, was no less cruel but at least it was faster. Any walk down a street included the bad feeling of a gun pointed at you or that some deadly bullet was racing toward your heart. Never ever stop to help someone who has been shot because the next bullet will be in your head. As a rule, it is the innocent civilians who receive, with no complaint or objection, the bullets issued by the American soldiers. Their only crime was that they were neither armed nor were they suspicious in the least. They were just ordinary people walking through these streets of death trying to bring home food for their family.

You never heard the bullet coming, just the sound of people falling. The lucky ones were cared for by people daring enough to accept the risk of somehow getting them to the hospital. Nonetheless, I found the Americans merciful. They gave us time to bury our dead, though we will never have enough time to mourn them. The green parks of a city like Ramadi turned into graveyards, making visual the Son of Man’s unimaginable capability.

Our cities were practically copies of World War II Berlin and Stalingrad: demolished buildings, destroyed streets, no services. Those who remained in the cities lived like rats hiding behind the walls of shambled houses. When they emerged, they waited futilely at checkpoints, patted down by sweaty hands until they were given the right of passage. These former communities now could have been sets for World War II movies. In fact, life became like a slow motion picture in which everyone dies. It seemed that the singing of birds was gone forever.

Looking back at the great expanse of misery and cruelty of these dark years, I, the blind Tiresias, find it a miracle to hear again the laughter of children and the singing of birds. Though there is something strange in them, a sort of deep sorrow and fear. My Whitman was burned in the fight and all the people I know are now gone. Whenever I pass by their graves I cry in the heart of my heart until my cry crosses all realms of pain to melt in the wailing of an old mother I once heard at the ancient banks of the Euphrates; in the river, she had just discovered the corpses of her two sons.

Jadwe's initial inspiration for this piece is the new book "Our Man in Iraq" by Robert Perisic, and its companion site, ourvoicesiniraq.com, a collection of essays, interviews, archival footage, news articles and online resources about the impact of the war.

Majeed U. Jadwe is a professor of English Literature at Anbar University in Ramadi, Iraq

MORE FROM Majeed U. Jadwe