Why "Girls" got so dark

Season 2 wraps, as crazed and intense as (and perhaps reacting to) the show's most vitriolic critics 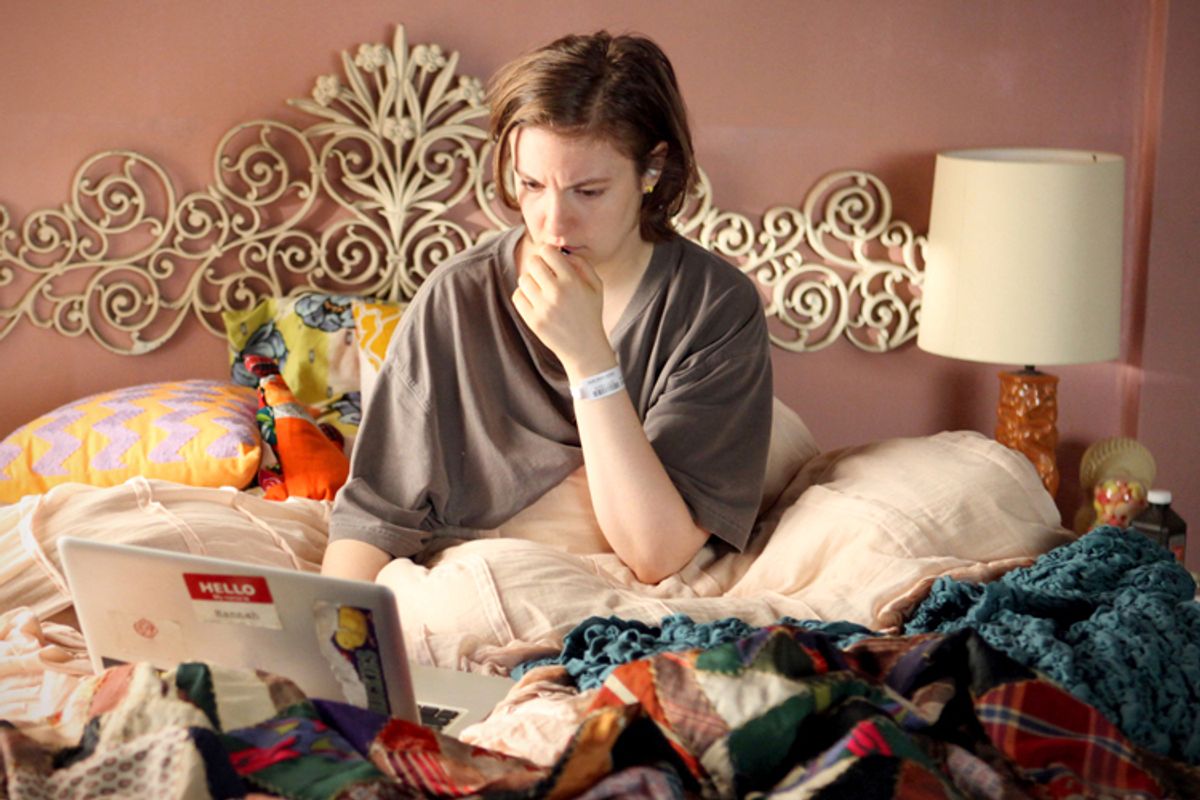 The second season of “Girls” is over now and despite being at least as controversial as the first, I think one way to understand it — one way to understand how it went from being a series about messy, lost, privileged but relatively normal-grade New York City chicks to something much more difficult and heightened about not-so-normal narcissists and basket cases — is to think about it as reaction to the intense vitriol and passion directed at the first season. Especially the vitriol. (Anyone who has ever read an Internet comment knows that a stranger’s hate is more palpable than his admiration. Or as Julia Roberts once put it, “The bad stuff is easier to believe.”)

The initial episodes of “Girls” presented the experience of regular, flawed, affluent chicks, a subject some people adored (this writer included), and some people hated. A paraphrase of the complaint: Who wants to watch these unlikable, spoiled girls screw and flibbertigibbet around the outer boroughs, like that’s something intrinsically interesting? The gall of Lena Dunham, and her connections and her parents and her co-stars' parents and her narcissism and her nudity and the idea that anything she accomplished could be greeted as an accomplishment when she’s had so much advantage, when her alleged "satire" is so self-congratulatory. This season, Dunham addressed this complaint by ratcheting up: You think Hannah and her friends were unlikable and spoiled before? But in doing so, inadvertently, she gave in: Regular girls may be interesting enough to be the subject of a TV show all their own, but they’re not the subject of “Girls” anymore.

The Donald Glover cameo in the first two episodes was the opening salvo. Right from the start, here was an active correction to the whitewashed first season in the form of a person of color, a person of color Hannah was screwing. Hannah’s behavior with Sandy, culminating in her contention that “maybe you should think about the fact that you could be fetishizing me. Because how many white women have you dated? Maybe you think of us as one big white blobby mass with stupid ideas,” was insensitive and idiotic, just one of the many moments that sought to aggressively cleave Lena Dunham from her alter ego.

If the more subtle season one cues that “Girls” didn’t cosign all of its characters’ actions were lost on some, in season two, “Girls” started using a megaphone: It knew theses girls were unlikable, that was the point. "Girls" was more than some reenactment of scenes from Lena Dunham’s diary. And the proof was in Hannah and her friends’ increasingly terrible behavior. The first four episodes established a broader, more comedic tone built around horrible words and deeds. Hannah did coke and threw out roommates, spoke stupidly about race and screamed at Marnie for being a bad friend. The previously stable Marnie acted out, used Charlie, swooned at the lame Booth Jonathan. Jessa tanked her marriage.

The friendships that undergirded the first season frayed as well. If the sweetness of those relationships had once been a reason to like "Girls," now they went sour. The middle trio of formally inventive episodes — episodes unlike anything the show had done before — showed how atomized the girls had become. There was Hannah’s one-off reverie with Patrick Wilson; Ray and Adam schlepping to Staten Island; Hannah and Jessa’s trip to upstate New York. All four stars appeared in the same place once this entire season. Episode four was the last time even three of the four girls were seen together.  By the time Hannah’s OCD was introduced, she was fully isolated. To get that awful Q-tip out, Hannah went to the hospital by herself, and walked home pantless and alone. In tonight's episode, when Marnie came to see her, Hannah hid. Marnie said she hadn't heard from Hannah in days, but for the audience it could have been months.

The two episodes before the finale toggled between Hannah’s OCD, Adam’s uncomfortable sex choices, and Marnie’s increasingly monstrous self-involvement. They were gripping, well-written and well-acted (especially by Driver and Dunham) and unremittingly dark. It would be a stretch to call these episodes of “Girls” comedic. (They're in good company, alongside “Louie” and “Enlightened” with that particular labeling problem.) “Girls” has always trafficked in a certain amount of cringe-theater, but these were almost all cringe-theater. Making it more painful, Hannah was no longer insulated by her boundless self-confidence and ego. She felt all the indignities wreaked on her body and her psyche — the splinters and the Q-tip and the stress and the solitude.

Which brings us to tonight's comparatively light episode, an episode that opened with a trio of awkward sexual encounters and finished with a trio of surreal happy endings (no pun intended): Marnie and Charlie back together, and seemingly happy, Shosh single and making out with a blond man, and Hannah in Adam's sweaty arms. After all the bleak, "Girls" served up some rom-com, complete with a man running through the city and breaking down a door to rescue his love.

But all of this happiness had a provisional, intentionally superficial feel: as if Marnie and Charlie don't still have issues, as if Hannah's all better now that Adam's back in her life. Marnie is still destabilized and needy. Hannah remains a serious, diagnosable disaster — now just one in the arms of a sweaty, shirtless man who adores her. The episode opened with a noise ringing in Hannah's still bleeding ear and her Googling all sorts of anxiety provoking questions. (How does your body know to keep breathing?) Her OCD is ongoing, and though she tells her father she's taking her meds it's hard to know if that's true. She chops off her hair. Her downstairs neighbor describes her as rotten. She curses out basically everyone she knows while leaving a message for Jessa. Even with the final dash of levity, Hannah remains more than just cutely messy: She's a woman who has a condition that led her to perforate her own eardrum.

This season "Girls" made itself over into the type of story our culture is comfortable seeing 20-something women appear in — the catastrophe memoir. A series that began by chronicling, so exactly, a type of regular, lived experience, became a show chronicling an irregular, heightened experience, the breakdown of Hannah Horvath (even if the OCD story derives from Dunham's own experience). The narrative of the 20-something woman with a mental illness (or a drug problem) is one of the few that we intrinsically understand to serve a "function," to have a "right" to exist, to be the sort of story that is not dismissible as narcissistic or gross or vapid.

Craziness as a way of legitimizing female characters is all over TV right now: In this week’s New York Times Magazine, Heather Havrilesky wrote a whole piece about how common the “crazy” woman, not just headstrong but an actual headcase, has become. But for those of us who loved and admired earlier iterations of "Girls," Hannah and her friends didn't need darkness and disorder to be a legitimate subject — only the haters believed that what they were wasn't enough, that their experience was uninteresting and unimportant and already overexplored and overrepresented. In its second season, "Girls” became more painful and searing, punchy and merciless, but it also became less radical, looking away from standard-issue 24-year-old chicks to focus on disturbed ones. Talking to her father in the finale, Hannah insisted, "I'm not crazy." Next season, I hope we can believe her.