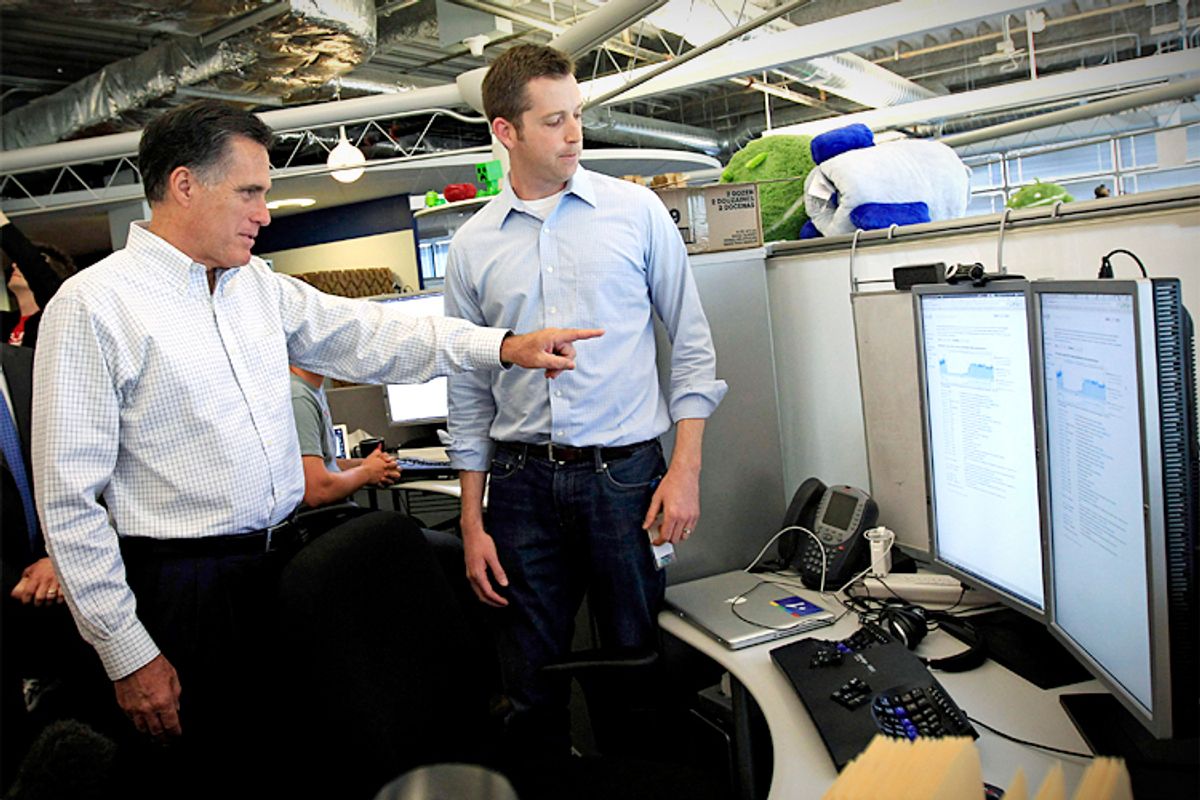 In its massive autopsy report released Monday, the Republican National Committee says the party needs to get a lot better at technology if it ever hopes to win a presidential election again. "A commitment to greater technology and digital resources in all areas referenced above is critical," the task force report notes. And according to a poll conducted by the group, GOP political operatives say data analytics and better digital outreach are among the top priorities for the party heading into the 2014 and 2016 elections.

But Republicans have one very big problem when it comes to recruiting the talent needed to modernize the party's digital infrastructure: its hostility towards gay people.

That's according to Liz Mair, who was the RNC's online communications director in 2008 before leaving to start her own political consulting firm. Since then, she's worked with Carly Fiorina on her 2010 California Senate bid, with Rick Perry’s 2012 presidential campaign, and with Wisconsin Gov. Scott Walker’s successful reelection effort after a recall attempt last year.

She's also one of her party's most outspoken activists on marriage equality, sitting on the leadership committee of Young Conservatives for the Freedom to Marry and on the GOProud advisory board. I caught up with Mair at CPAC on Thursday, where she was wearing a Freedom to Marry t-shirt (she said she got “a couple of confused looks"). She told me anti-gay Republicans will have  hard time recruiting from the pool of mostly liberal and libertarian tech gurus if they maintain their hard line on gay rights. Below is a transcript of our conversation, lightly edited for clarity and conciseness.

When it comes to reaching out to demographics where Republicans lost in 2012, does the GOP need to shift on the underlying policy or is it just about better messaging and outreach?

I think it’s a mix of both. There are some folks who talk about the imperative to engage in a wholesale policy shift. While I think that’s a bit bogus, on the other hand, when you’re looking specifically at Hispanics and gay people, I think there’s a real rationale for engaging in a bit of a policy shift.

But on other issues, I don’t necessarily think we need to move. For example, while I am personally pro-choice, I’m not convinced that in order for the Republican Party to perform better electorally, everyone needs to go pro-choice.

Why is shifting on gay issues so important? It’s obvious with immigration, as Hispanics make up 30 percent of the population and care about this issue, but gay Americans are much a smaller group and it seems like the GOP may have already turned them off forever.

Well, right now I don’t think it’s necessarily an electoral issue when it comes to gay issues or marriage, though it could potentially be one in the future, considering where younger voters are on this.

However, where I do think it’s a significant problem is in the recruitment of good technology talent. If you go out into Silicon Valley or Redmond [Washington, where Microsoft is based] or the Northern Virginia tech corridor, you have a lot of liberals and you have a lot of libertarians. You have very few actual three-legged stool conservatives. That’s the challenge. So if you’re taking a sort of Rick Santorum-type line, I just don’t know where you pull your talent from in order to do the big, important, complicated digital things that would rival what the Obama operation did. That gets really tricky.

For that reason, I think some of the candidates who are a bit softer or actually pro-equal rights -- and when I say equal rights, I don't specifically mean pro-same-sex marriage necessarily, but civil unions and other rights protections -- they’ll have a better look-in from the technology talent.

So when Marco Rubio today went out of his way to talk about "traditional" marriage, do you think that’s surprising or harmful?

I didn’t find it surprising in view of his previous remarks on the issue. I do imagine that there were quite a few people in the audience here who were not aware of those prior remarks, so the fact that he made them in this venue is probably newsworthy in and of itself. And the fact that he chose to say it so explicitly is an indication of how the party has already shifted.

He’s fighting the shift, trying to pull it back toward the social conservative side?

Yeah, and I think to some degree that’s true, but I would say that if you look at where the Republican Party was in 2008, when we nominated a guy in John McCain who voted against the federal marriage amendment, I’m not totally convinced that you can view that as a massive step in a different direction. So it's not clear we're on an linear path toward progress at all, but I am cautiously optimistic.