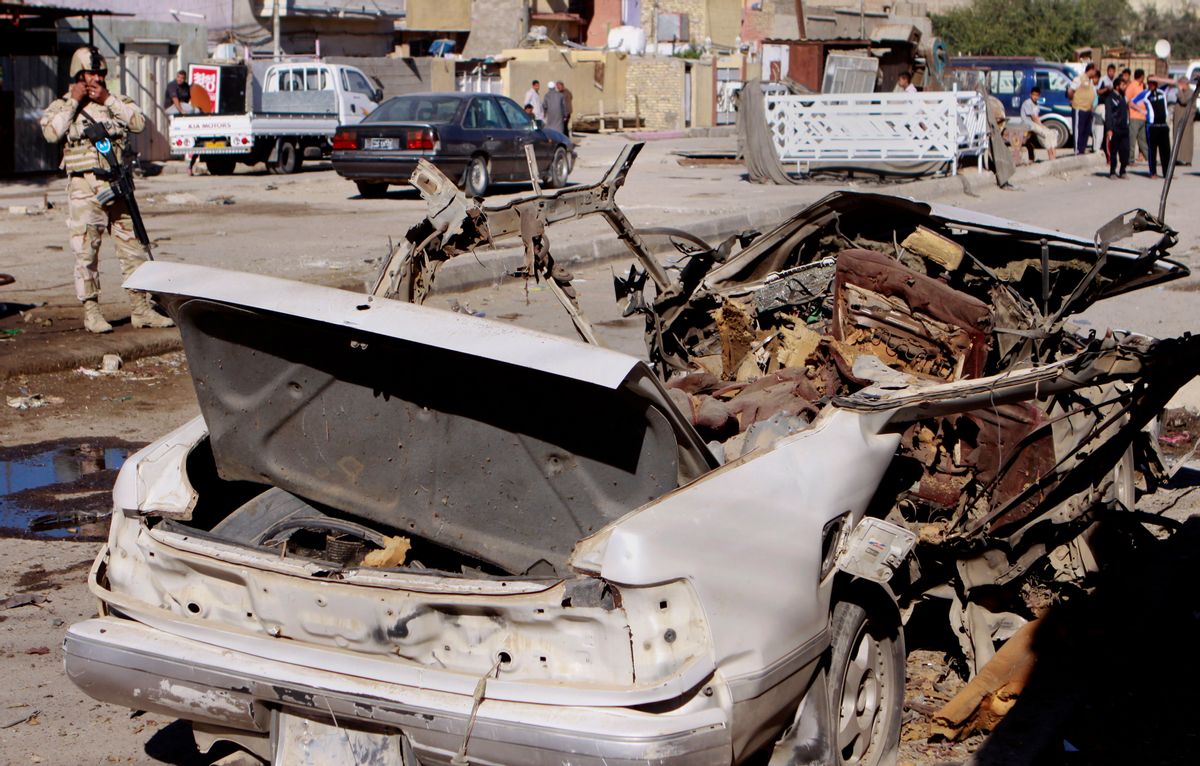 A wave of bombings tore through Baghdad on Tuesday morning, killing at least 56 people in a spasm of violence on the eve of the 10th anniversary of the U.S.-led invasion.

The attacks show how dangerous and unstable Iraq remains a decade after the war — a country where sectarian violence can explode at any time. And though attacks have ebbed since the peak of the insurgency in 2006 and 2007, tensions simmer and militants remain a potent threat to Iraq's security forces.

Tuesday's attacks were mostly by car bombs and targeted mainly Shiite areas, small restaurants, day laborers and bus stops in the Iraqi capital and nearby towns over a span of more than two hours.

Along with 56 killed, over 200 people were wounded in the attacks, officials said.

The bombings came 10 years to the day that Washington announced the start of the invasion on March 19, 2003 — though by that time it was already the following morning in Iraq.

Also on Tuesday, Iraq's Cabinet decided to postpone upcoming provincial elections in two provinces dominated by the country's minority Sunnis for up to six months. The decision followed requests from the political blocs in the provinces, according to the prime minister's spokesman, Ali al-Moussawi.

The two provinces affected, Anbar and Ninevah, have been at the center of the nearly three-month-long protests against Iraq's Shiite-led government. Provincial elections were scheduled for April 20.

One of the deadliest of Tuesday's attacks struck close to one of the main gates to the heavily-fortified Green Zone, which houses major government offices and the embassies of several countries, including the United States and Britain. That blast outside a restaurant killed six people, including two soldiers, and wounded more than 15. Thick black smoke could be seen rising from the area as ambulances raced to the scene.

There was no immediate claim of responsibility for the blasts, but the attacks bore hallmarks of al-Qaida in Iraq. The terror group favors spectacular, coordinated bombings intended to undermine public confidence in the Shiite-led government.

Police and hospital officials who provided accounts of the days' bloodshed reported the most casualties from a car bombing near the Ministry of Labor and Social Affairs in Baghdad's eastern Qahira neighborhood at around 10 a.m. That blast killed seven people and wounded 21.

The officials provide casualty numbers on condition of anonymity because they were not authorized to release the information to journalists.

The violence started at around 8 a.m., when a bomb exploded outside a popular restaurant in Baghdad's Mashtal neighborhood, killing four people and wounding 15. It blew out the eatery's windows and left several cars mangled in the blood-streaked street.

Minutes later, two day laborers were killed and eight were wounded when a roadside bomb hit the place where they gather every day in an area of New Baghdad.

Hussein Abdul-Khaliq, a government employee who lives in Sadr city, said he heard the explosion and went out to find the minibus on fire.

"We helped take some trapped women and children from outside the burning bus before the arrival of the rescue teams. Our clothes were covered with blood as we tried to rescue the trapped people or to move out the bodies," he said.

"Today's attacks are new proof that the politicians and security officials are a huge failure," he said.

Other attacks struck the largely Shiite neighborhoods of Hussainiyah, Zafarniyah, Shula and Utaifiya, as well as the Sunni district of Tarmiyah.

Tuesday's attacks came a day after insurgents killed nine people, including a bombing by a suicide attacker who killed five when he drove an explosives-laden car into a checkpoint in the central Iraqi town of Balad Ruz.

Al-Qaida's Iraq arm, which operates under the name the Islamic State of Iraq, has sought to reassert its presence in recent weeks.

Last week, the group claimed responsibility for a highly coordinated attack earlier this month in far western Iraq that killed nine Iraqis and 51 Syrian soldiers who had sought temporary refuge in the country.

And on Sunday, al-Qaida's Iraq branch took responsibility for a brazen and again highly coordinated raid on the Justice Ministry in downtown Baghdad last week. The attack, involving car bombs and gunmen disguised as police, killed at least 24 people.