No, Jesus wasn't a white dude

But you won't hear that on the popular miniseries "The Bible" 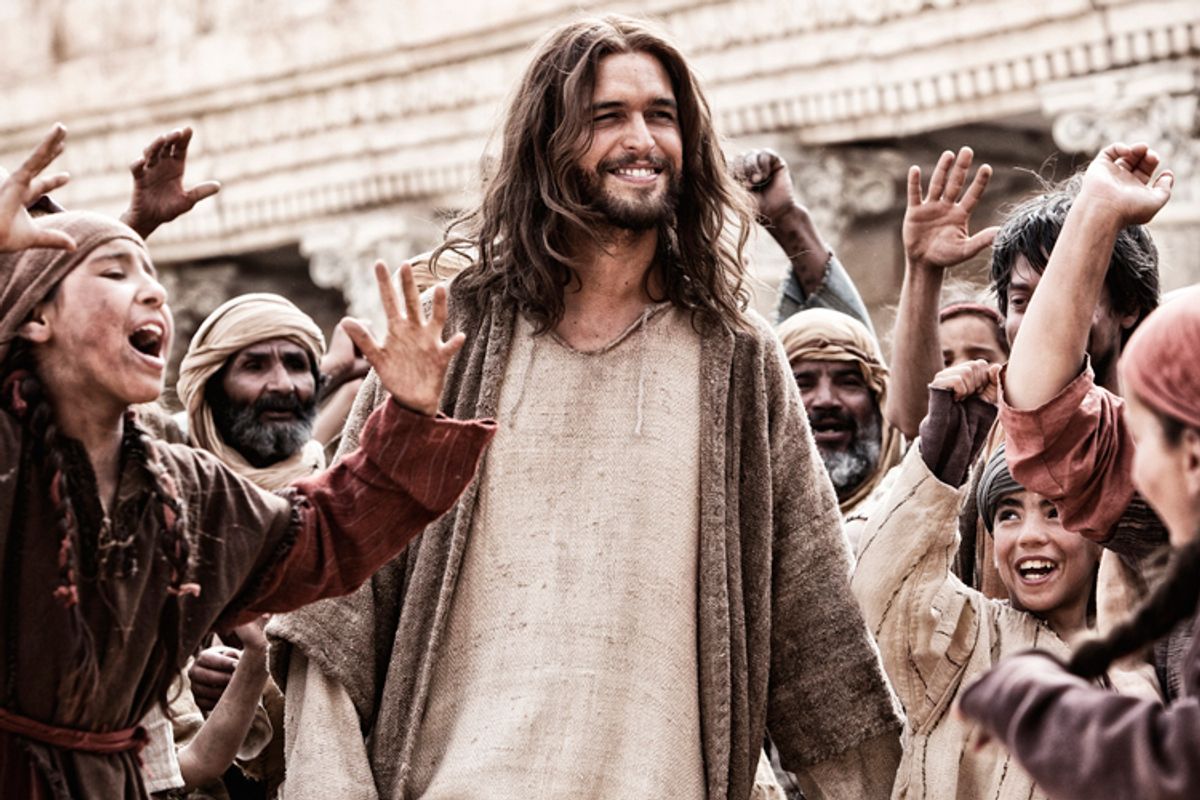 The History Channel miniseries "The Bible" is one of the most popular TV shows in recent memory. "The greatest story ever told" seems to have much life left in i

During an age of economic uncertainty (and even more so among Christian Dominionist evangelicals who believe Barack Obama is the anti-Christ) it makes sense that a retreat to a popularized version of the underpinnings of Christian faith, tailor-made for cable TV, has proven to be popular.

"The Bible" will likely draw more viewers following the controversy generated by a recent episode that offered up a vision of “Satan” whose facial features are almost identical to those of President Barack Obama.

The right-wing echo chamber is resonating with affirmation and joy at this discovery: the Christian Dominionists on the Right instinctively knew that the election of Barack Obama, the United States’ first black president, beckoned the “End Times.” (McCain’s campaign even offered up an ad in 2008 suggesting this very fact.) Now, the History Channel has validated their version of reality.

"The Bible" is not a "true" or "accurate" depiction of events. Like other TV shows and films, the final product is the result of the many decisions made by producers, actors, directors, writers, and editors. However, that does not mean that we should avoid asking some basic questions about the accuracy of the miniseries. For some, what follows is an uncomfortable truth.

The historical figure known as Jesus of Nazareth was not "white. He was not European. Based on the scholarly consensus, the historical Jesus would be a Middle Eastern Jew of medium, if not dark, complexion. He was certainly dark enough to have spent time in the Middle East and elsewhere, and not to have had his skin tone commented upon or noted.

This Jesus would be hounded and harassed by the TSA, looked at as a de facto "suspicious" person in post-9/11 America, and be racially profiled by the national security state. The historical Jesus would likely be subject to stop-and-frisk policies by the New York police and others. If it were too late at night, and the historical Jesus was trying to get a cab--especially if he were not attired "professionally"--he would be left standing curbside because brown folks in their 20s and 30s who look like him are presumed to be criminals.

Despite the "common sense" depiction of Jesus in the (white) American popular imagination, the historical Jesus Christ is not a white surfer dude with blue eyes, long flowing hair, and tanned and toned skin.

When I was an undergraduate and forced to take a series of religious studies classes as part of a core requirement, I was exposed first-hand to how volatile such a basic observation can be to some Christians and others who identify with that faith tradition. Our professor was discussing how the Bible is a historical text that has been edited and changed to reveal the prevailing political and social norms of a given time. I asked a question about the Civil Rights Movement and how black folks tried to use the text for purposes of political inspiration and motivation in the face of great adversity.

This transitioned to a followup question where I asked, "What color was Jesus?" Having just seen the movie, Malcolm X, I was curious as to the professor's response. He looked around and plainly said that Jesus Christ was not white or European. He would likely be a medium-complected Jew with brown or darker skin.

Check and mate: thus my followup, "Could one reasonably say that Jesus the historical figure was black?"

Our masterful professor looked around in a contemplative manner and said, "Depending on who you ask, and in what context, one could say that he could be considered 'black' in a society like America where whites have been so color conscious and race obsessed." You could have heard a pin hit the floor as gasps of anger erupted from the white (and some black and brown) students in the class.

Some students actually tried to get this professor fired. He was saved by a few things. First, his research claims, historiography on the matter, and credentials were impeccable. He had tenure. And he was white. It is quite likely that a black faculty member making such a basic claim would have had far fewer protections.

In these discussions of faith, some would likely object that race doesn't matter. Who cares what color the historical Jesus is/was?

Here, the color of Jesus Christ matters while simultaneously being of little import. Thus, a paradox. If the color of Jesus Christ is unimportant, why then the objection to the question and a resistance to changing the images to be more historically accurate? Moreover, such a basic question about the lie that is white Jesus, is often deflected and redirected into one which ends with the power of the white racial frame enabling those invested in its distortion(s) of reality arguing that anyone, especially a person of color, asking such things must be a black "racist" or anti-white.

If a Christian is a true believer why would they have difficulty reconciling their faith with such a superficial thing as changing the historical lie that is white Jesus into one that is more accurate, a man of color, whose message would be unchanged? Would it really be that hard for some white Christians (and others) to kneel before a black or brown Jesus Christ? Are the psychic wages of whiteness so great as to distort a person's image of God?

These matters of race, religion and politics remain potent even in 21st-century America. See how President Obama's presidential campaign was almost destroyed by Reverend Wright and the white conservative bogeyman known as "black liberation theology."

Leonardo da Vinci and Michelangelo's White Jesus were iconic images that enabled European colonialism and imperialism. In these grand projects of global white power and conquest, "Christian" became synonymous with free, white and civilized. "Heathen" meant that whole populations could be subjected to extermination, enslavement and exploitation.

The current and most popular image of Jesus as created by Warner Sallman in 1941 depicts the former as a white "American." Here, American exceptionalism, Manifest Destiny, and rise as an Imperial power were ordained as being one with Jesus, and a blessing from God for a country whose elites imagined it to be a "shining city on the hill."

This logic is perfectly cogent: a racial project of exploitation and enslavement of non-whites by Europeans, one legitimized by a belief in the natural inferiority of people of color, the pseudo-science of the Great Chain of Being, a belief in the Curse of Ham as well as other myths, must, for reasons of practical necessity, be predicated on the existence of a "white" God.

A twisted complement to how the whiteness of Jesus has been historically naturalized in the West is how the same ahistorical image adorns many African-American churches (as well as those of Latinos, Asians, Native Americans, and others) in this country and throughout the world.

Is there any greater example of the twisted nature of the color line, and the power of internalized white supremacy, than how many millions of black and brown folks kneel and pray before the image of a white god -- an image which has long been used to justify and legitimate white supremacy and racial exploitation? Black and white Christians pray to the same mythologized and historically inaccurate image of Jesus; yet, they do not pray or worship together in the same churches.

Research shows that white audiences will not watch TV shows or movies which they judge to have too many people of color as characters. A historically accurate version of the Bible, which embraced the demographic realities of the era such as HBO's epic series, "Rome," would be a revelation. Unfortunately, many in the American public would be unwilling to hear such a basic truth, for it would be too upsetting for those who have internalized whiteness and white privilege even on matters of religion and faith.