Who's held accountable for Iraq?

Despite all the fatalities, injuries and costs of the conflict, 10 years later we've apparently learned nothing 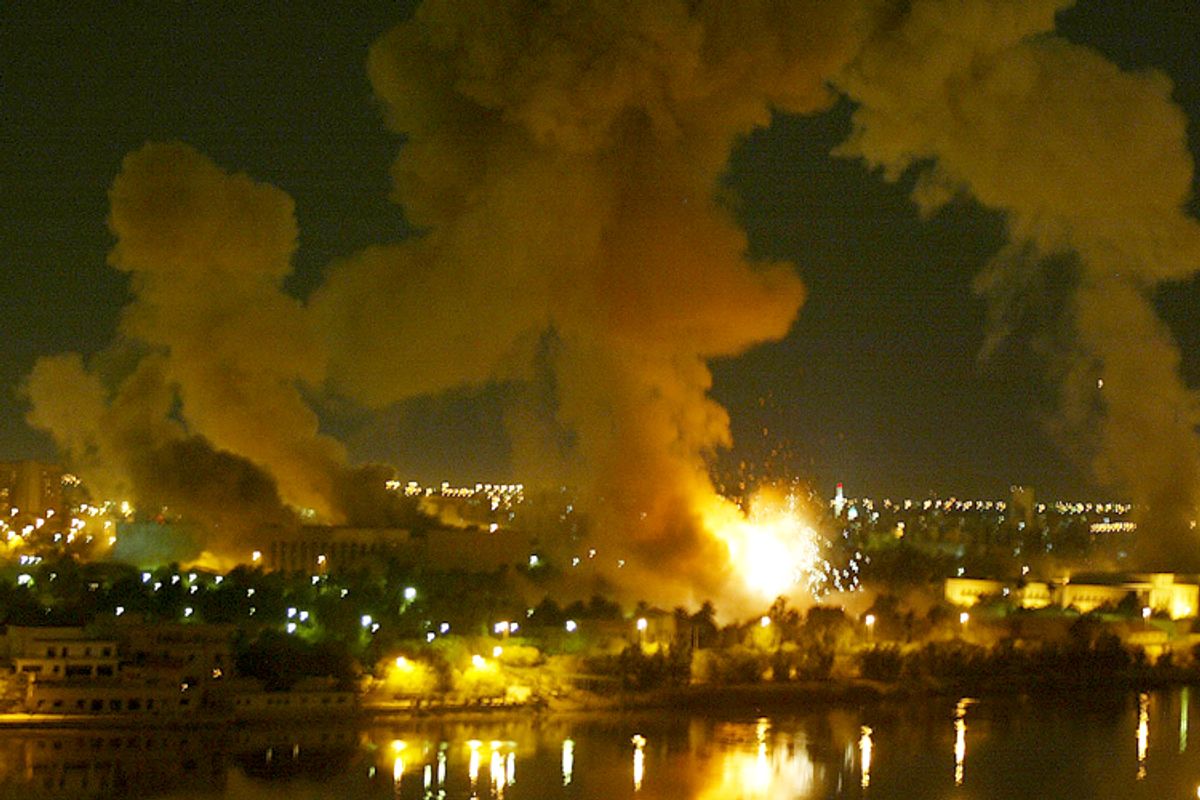 After 10 years, $2 trillion spent, an estimated 1 million civilians casualties, and almost 37,000 U.S. troops deceased or injured, one of the biggest enduring stories of the Iraq War has to be how little the debacle changed anything in the United States (or, arguably, in Iraq).

Today, on the 10-year anniversary of the Iraq invasion, America still has a massive, fiscally unsustainable defense budget; Congress still teems with lawmakers who fervently supported the Iraq War and who never admitted their mistake in promoting the WMD lies; the foreign policy establishment is still dominated by Iraq War proponents who never acknowledged their misjudgments and/or their willingness to suppress inconvenient information; the Washington press corps is still populated with reporters who failed to ask serious questions about the case for war; and the opinion news sphere is still promoting those who got the Iraq War flat wrong. And while there are some vague rumblings about the possibility of changed foreign policy outlooks, the fact remains that the Afghanistan War escalation, the intensifying drone war and the unauthorized Libya War suggest that the Iraq conflict's lesson about the perils of "nation building," "preemptive war" and blowback are still largely ignored.

To appreciate how little political fallout the Iraq War generated, consider how different the reaction was to American history's most recent antecedent to the Iraq conflict. A generation ago, a similarly misguided war of choice in Vietnam resulted in such a fervent political backlash that a president was forced to opt against running for reelection, a slate of anti-war legislators was swept into Congress, and pro-Vietnam War Sen. Thomas Dodd and Gulf of Tonkin Resolution architect Sen. William Fulbright were voted out of office. At the same time, the leading voice in the establishment media dared to adversarially report fundamental flaws in the pro-war argument, to the point where it has become a mark of shame to admit you publicly backed the conflict.

To be sure, the reaction gap between Vietnam and Iraq can be explained, in part, by the fact that the former invasion generated more casualties, and by the fact that the former also involved mass conscription. That particular method of raising a fighting force tends to spread a war's blood-and-guts consequences more widely through the population -- and therefore creates the potential for a bigger political backlash -- than a fighting force that is all volunteer.

However, that's not the whole story. The other factor that explains the reaction gap between Vietnam and Iraq is a change in the political system. Simply put, in the last decade, that system has become almost completely impervious to any kind of consequences for bad decisions. Over time, such a lack of accountability has created a self-fulfilling feedback loop. With the public seeing no consequences for wrongdoing, the expectations of consequences, or feelings that they are even necessary, slowly but surely disappear.

This reality, of course, does not just define foreign affairs in the post-Iraq world. It is evident everywhere. From a refusal to prosecute a single banker connected to the financial meltdown, to the refusal to hold oil companies accountable for environmental destruction, to the refusal to hold education "reformers" responsible for the failure of their destructive policies, the modern era has taught us in myriad ways that there is no such thing as accountability for the politically connected.

In that sense, the Iraq War was the original event initiating the larger Age of Moral Hazard -- an epoch whereby our failure to demand consequences for bad decisions has effectively encouraged the political class to get things horrifically wrong, as long as doing so serves powerful political interests.

What is the converse of this dystopia? What, you ask, does a culture of basic accountability look like?

In a culture of accountability, no politician who voted for the $2 trillion Iraq War would be able to preen as a "deficit hawk," yet so many who cast such votes nonetheless do (and are portrayed in the media as) just that.

In a culture of accountability, no politician who voted for the Iraq War would have been considered a serious candidate to occupy a government post that deals with foreign policy, yet from Hillary Clinton at the State Department to Denis McDonough in the White House chief of staff's office to so many others in similar positions of power, Iraq War supporters still occupy those posts -- and with almost nobody asking how that is possible.

In a culture of accountability, no pundit who cheered on the WMD "imminent threat" case for the Iraq War would be billed as as a national security "expert" nor given a major media platform to spout off about foreign policy, yet, from David Brooks to Thomas Friedman to Joe Klein to everyone else on lists like this, both conservative and liberal Iraq "hawks" still dominate national security opinion making.

In a culture of accountability, people like Dick Cheney and Colin Powell who crafted the lies that pushed America into war would only be able to show their faces on television as pure punch lines -- and not as serious political voices. Yet, there they are on the tube, still treated as entirely credible.

In a culture of accountability, the relatively few politicians, political activists and scholars who opposed the Iraq War would be treated not just as courageous heroes, but as the truly prescient "experts" on national security, and those who blindly supported the war would be relegated to the historical trash heap. Instead, it is still the other way around: The warmongers like John McCain and Bill Kristol who got Iraq so wrong somehow remain the go-to authorities on all things war, while liberals who got Iraq right are still either largely ignored or marginalized.

Somehow, the pro-war ideologues are still promoted as dispassionate hard-nosed "pragmatists" while those who opposed the war see their prescience written off as just the product of blindly dovish ideology, and not of smart, well-considered forethought. In fact, in many instances, it is the Iraq War critics who still face punishment for their opposition. They, not the war proponents, are punished by being portrayed as the controversial radicals (case in point was Chuck Hagel, whose evolution from an Iraq War supporter to Iraq War critic -- and whose willingness to apply Iraq lessons to Iran policy -- were widely depicted not as solid reasons to confirm him as secretary of defense, but instead as good reasons to oppose his nomination).

The standard riposte to this is to insist that nobody lied, the intelligence was wrong, and that Iraq hawks did what any patriotic American would allegedly do by simply accepting what their government told them. This is supposed to absolve Iraq hawks from any consequences for their warmongering by casting it as both logical and unavoidable.

But, of course, deliberate lies were told, the intelligence was calculatedly cherry-picked, and most important of all, patriotism (and journalism) does not mean accepting without question the claims of government officials.

Yet, accepting without question is exactly what happened. Congressional lawmakers abdicated their constitutional oversight responsibilities, journalists ignored their Fourth Estate obligations to ask basic questions, and the transpartisan punditocracy became a megaphone for pro-war propaganda. That's not by accident or unavoidable; it was the result of intentional decisions.

For most of us, if we were a party to such horrifically wrong, deliberately destructive and altogether extreme decisions in our own day-to-day lives, we would face punishing consequences, especially if we never bothered to apologize for our sociopathy. We would face public scorn and humiliation. We would probably get demoted or fired. We might even face criminal prosecution.

Until and unless the same standard is applied to the political establishment and media stenographers for their Iraq warmongering, there will be no change. We will still be living in the Age of Moral Hazard -- and we should expect more Iraq-like debacles for decades to come.