"Bates Motel": We need to talk about Norman

A&E's "Psycho" prequel wonders how killers get made 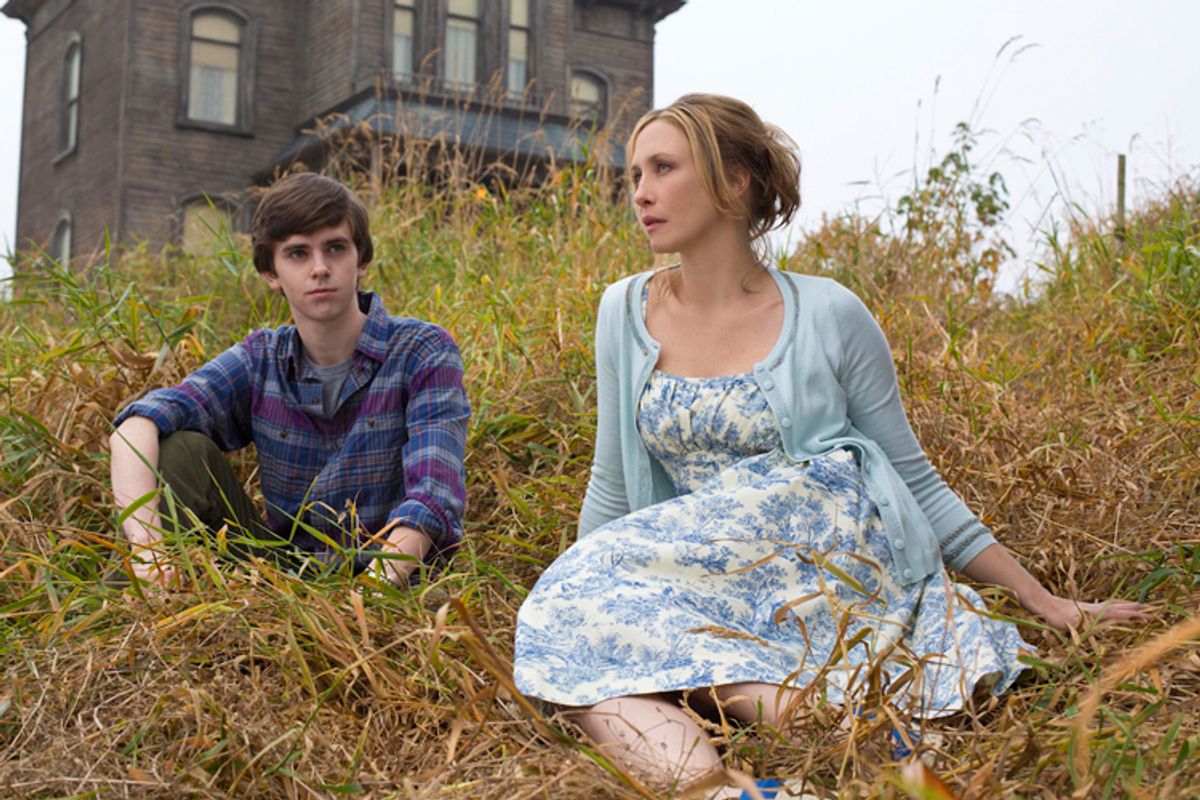 The central question of “Bates Motel,” the 10-episode prequel to “Psycho” that premiered on A&E last night, is just how a teenage Norman Bates became that Norman Bates, the infamous killer. But the series, or the first three episodes anyway, are on a sort of mission of sympathy:  a collection of the mitigating circumstances that turned a slightly freaky teenager into something much more dangerous. Monsters may be born, but they’re also raised: The most mitigating circumstance of all in young Norman Bates’ life is, as you might expect, his mother.

Freddie Highmore, Charlie in Tim Burton's “Charlie and the Chocolate Factory” but now looking something like a long, stretched-out Mike Teavee, stars as Norman. After the suspicious death of his father, he and his mother, Norma (Vera Farmiga), move to California and into the infamous Bates Motel, which they plan to fix up.  Norman is a bright and sensitive boy who physicalizes his stress: worried, he vomits; turned on, he passes out; angered, he blacks out and gets violent. Though Norman is mostly shy and soft-spoken, presenting as a sweet, mild-mannered nerd — the show is set in the present, but Norman and Norma dress in something like period clothes: Norman’s always wearing '50s-ish sweaters — he has a temper, a tendency to tantrum in uncomfortable situations. And he also has a passionate devotion to his mother, such that not only can no one else say anything bad about her, and if they do, he might go after them with a meat tenderizer.

As Norma, Farmiga avoids camp, which one might might have presumed would be the default setting of the entire series. Her Norma is loving and complimentary and overbearing. She wants too much of Norman for herself, but there’s no doubt she loves him, and she’s all the more deforming for being self-aware and manipulative enough to apologize for some of her neediness. In the premiere, Norman returned home late from school, to a candlelight dinner, and asked to join the track team. Norma laid a huge guilt trip on him— how’s she supposed to get the motel ready all by herself? They were supposed to do it together. Forget it, she can just do all the work — before signing the permission slip, like a martyr. “I’m not going to be the mom who doesn’t let you join the track team," she said, the sort of extra-level mindfuck, couched in love and sacrifice, of a real pro.

Norma and Norman’s relationship is codependent and overly intimate — feigning protectiveness or interest, Norma cock-blocks Norman a number of times — but  “Bates Motel’s” best quality is the intimation that maybe if Norman weren’t Norman, Norma’s behavior might only be crazy enough to give the kid a hundred thousand dollar therapy bill. “Bates Motel” traverses some of the same territory as Lionel Shriver’s great, unsettling  “We Need to Talk About Kevin,” a novel about the mother of a school shooter: to what extent are psychos made, to what extent are they born, and if it’s a combination, can a mother be the exactly wrong mother for her child and vice versa? Norman is a strange boy and Norma is a strange mother: Could Norman have turned out differently with a different mother? Could Norma have turned out a different mother with a different Norman?

Complicating Norma and Norman’s already too intimate dynamics (“Bates Motel” often shoots them from angles that suggest they may be about to kiss, but they haven’t yet crossed the line) is that in last night’s premiere, Norma was raped by the previous owner of the Bates Motel property. Norman, who had sneaked out of the house to go to a party — the kind of normal teenage thing you wish he’d do more of, but that coming home to find his mother being raped probably precludes from happening again — returned and knocked the rapist out. With Norman out of the room, Norma stabbed the assailant to death, and insisted that Norman help her with the body and coverup, not something a mother of the year would do.

The rape is just one instance of “Bates Motel’s” feverish, churning approach to plot. If this were just a three-hour miniseries, the Norma-Norman relationship would be the only focus. But it’s a 10-episode series about what lies beneath the surface of one teenager, and it needs action. It gets it in what lies beneath the surface of a bucolic-looking town. In addition to local rapists, in the episodes to come there are drug wars, burning corpses, marijuana fields and sex slaves. (At moments, especially when focused on Norman and his high school mates, “Bates Motel” reminded me of ABC Family’s “Pretty Little Liars,” a show in which a group of high school girls keep getting caught up in one ludicrous plot they take deadly seriously after another, their tiny California town capable of unending evil, every good-looking person containing a world of sin.) But even with all these other melodramatic sideshows, it's the Norman-Norma show that's the reason to watch.