When the war came for me

Ten years ago, I was a soldier on my way to a Purple Heart for carpal tunnel syndrome. But my fate changed in a day 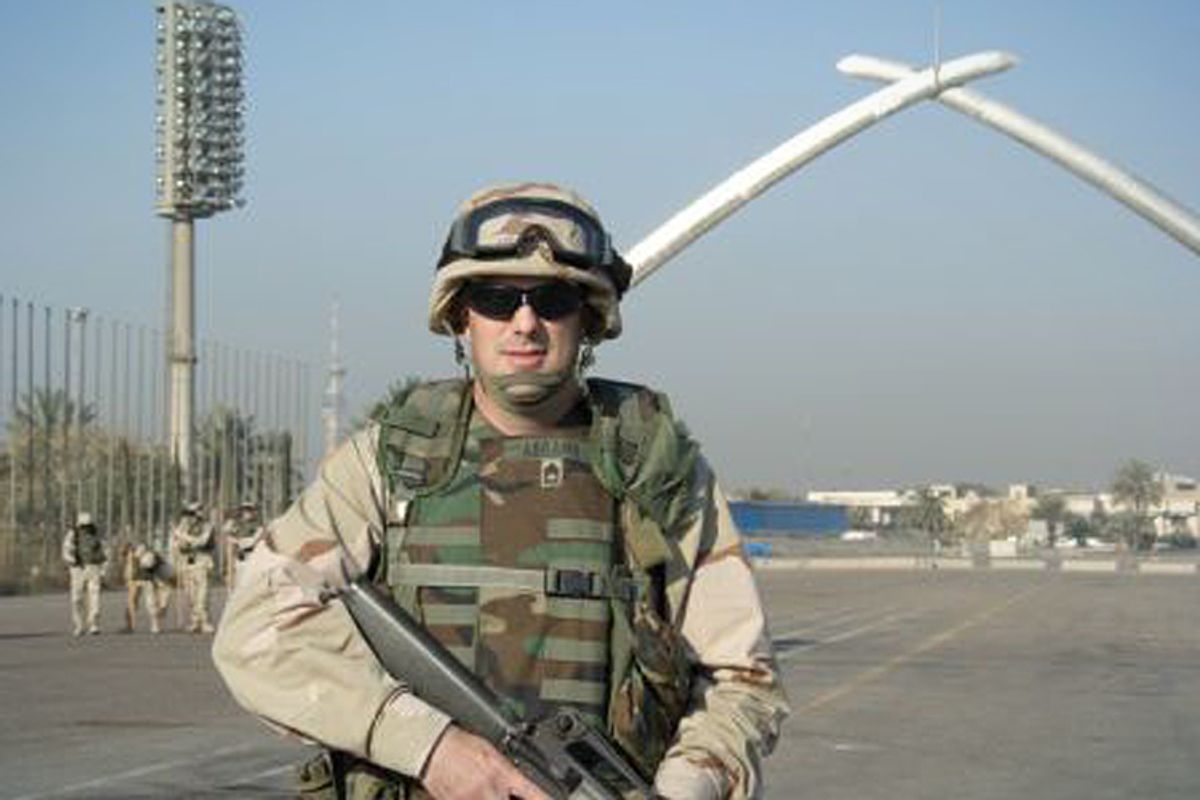 On March 20, 2003, I was stationed in Alaska, about as far away from the desert heat of Iraq as you could get. I was a staff sergeant in the Army, assigned to the public affairs office at Fort Richardson just north of Anchorage. I spent nearly every working hour under the bland gaze of fluorescent lights with thoughts of war — actual combat in the “real” Army — far, far from my mind. Maybe someday I’d earn a Purple Heart for carpal tunnel syndrome, but I knew I would never come close to the graze of a bullet.

From the distant land called Washington, D.C., we’d heard the rumble of war-mongering getting louder every day. And now, the inevitable was upon us. For weeks, George W. Bush and Saddam Hussein had engaged in a stare-down contest. Neither one had blinked and now their eyeballs were all dried out, thanks to their resolve, hubris and, in at least one case, outright insanity. Bush had given Iraq a 48-hour warning, clicking a political stopwatch to life.

As the hour neared, there was something approaching a party atmosphere in the U.S. Army Alaska headquarters building where I worked. Voices rose in pitch. Tight laughter punctuated conversations. Senior officers swaggered down the hallways. At last, at last, all their military training would be put to good use.

Those of us who’d never been to war were reluctantly excited, as if enthusiasm were a job requirement.

The public affairs staff — a soft, pale band of brothers and sisters — gathered together at Zero Hour. We crowded around the small television in the office of the deputy PAO, a Department of the Army civilian named Chuck who’d been in Alaska since Jimmy Carter was president. Chuck never met a piece of paper he didn’t love. He was a hoarder and his office had become a death trap of files, maps, books, newspapers and binders full of old infantry training plans. One sharp sneeze could have triggered an avalanche of paperwork.

One corner of Chuck’s office was taken up by a large cage for his pet iguana, Iggy. The cage stank of lizard piss, moldy cabbage and molted skin, reminding us that Iggy had been around since the Reagan administration.

On this day, though, we held our noses and tried not to sneeze because we were watching the countdown clock on CNN. Standing there with my co-workers as the numbers ticked down to 00:00, my chest tightened with an odd mixture of patriotism and worry.

I was in Alaska and figured I’d remain there for at least another year until my current assignment ran out. The Army couldn’t touch me, could it? They needed me here in the frozen north, carrying out my appointed duties, right? There was no chance I was going to war any time soon, was there?

The deadline arrived and, somewhere in a distant desert, the war officially began. A co-worker said, “Well, that’s that,” and we dispersed, leaving Chuck’s office to the silence of dusty files and the slow blink of an iguana’s eye.

That night, as I walked from the headquarters building to my wife and kids waiting for me in the post’s family housing area, my sense of unease continued to ratchet tighter. If I was honest with myself, I’d face the fact that I no longer belonged to myself; I belonged to the Army, just as I had since the day I raised my right hand and took the oath of enlistment 15 years earlier. Anything could happen now. America had not blinked her dry eyeballs. We were crossing the line. Even as my insulated combat boots crunched through the snow, I knew that half a globe away, another soldier’s boots were pacing a small trench in Kuwaiti sand, anxious to get the order to head north.

When I walked into my housing unit, I was hit with the humid smell of dinner on the stove and the sound of President Bush’s voice addressing the nation. My wife and three teenage children were in the living room, staring at the TV. “My fellow citizens, at this hour, American and coalition forces are in the early stages of military operations to disarm Iraq, to free its people and to defend the world from grave danger.” My wife and I looked at each other silently, then turned back to the television. “To all the men and women of the United States Armed Forces now in the Middle East, the peace of a troubled world and the hopes of an oppressed people now depend on you.”

My wife rose from the couch and went back into the kitchen. “Dinner’s ready.”

We were now a nation at war, but here in the Abrams household, the daily routine would go on. That year, my wife and I were home-schooling all three children. Wednesday night was set aside for tae kwon do class at a strip mall in one of Anchorage’s suburbs. Even as President Bush was calmly, steadfastly reassuring the nation that “we will pass through this time of peril and carry on the work of peace,” my children were suiting up in their white pajamas and yellow belts. Tonight was my night to chauffeur the kids to their hour-long class in a small, glass-walled room, which would soon ring with sharp, high-pitched cries of “Ha!” and “Hi-yah!”

Faster than you could say “weapons of mass destruction,” we ate and were ready to head out the door. There was just one problem: My middle son, 16-year-old Schuyler, refused to go. He was sunk deep into one of his typical pouts, dark teenage storms that blackened the household with his petulance. He was going through a phase where he fought me every time I tried to take him to tae kwon do. Once we were at the strip mall, he’d sit on the sidelines, sullenly watching the other kids practicing their warrior stances and breaking boards with hand chops. It was a weekly fight that I dreaded like I was being asked to stick my arm in a tiger’s cage. On this night in particular, my son had dug his heels deep, refusing to budge.

I took my other son and daughter out to the car and told them to wait while I went back inside for Schuyler.

He was still at the dinner table, arms crossed and a scowl on his face. “I’m not going.”

And on it went until it crescendoed in this regrettable scene: me grabbing my son around the waist and half-carrying him out the front door. He howled and wriggled and writhed in my arms — an angry python, a county-fair pig greased in oil, a power-line cable snapping with sparks. He bucked from my arms and fell to the icy driveway, kicking and screaming. My hands clapped like manacles around his ankles. I pulled and pulled and pulled him toward the car. His white pants slipped halfway down his butt, but still he continued to yell, “I! WON’T! GO!”

I saw the tip of a hand part the neighbor’s curtains as they looked out, pulled from their television War Watch by this soap opera in the family housing courtyard. I thought of surrendering, letting Schuyler have his way and caving in to his irrational behavior. But then just as quickly, I pictured the battalion of soldiers who were even now pushing north into Iraq, locking and loading 40-round magazines into their rifles.

I tightened my grip on Schuyler’s ankle and continued to pull. I would win this war.

David Abrams is the author of the novel "Fobbit" (Grove/Atlantic), a comedy about the Iraq War, which was named a New York Times Notable Book of 2012. His stories have been published in Esquire, Narrative, Five Chapters and several other publications.