Why are we supposed to have sympathy for rapists?

The Steubenville sex offenders deserve pity, but not for the reasons you think 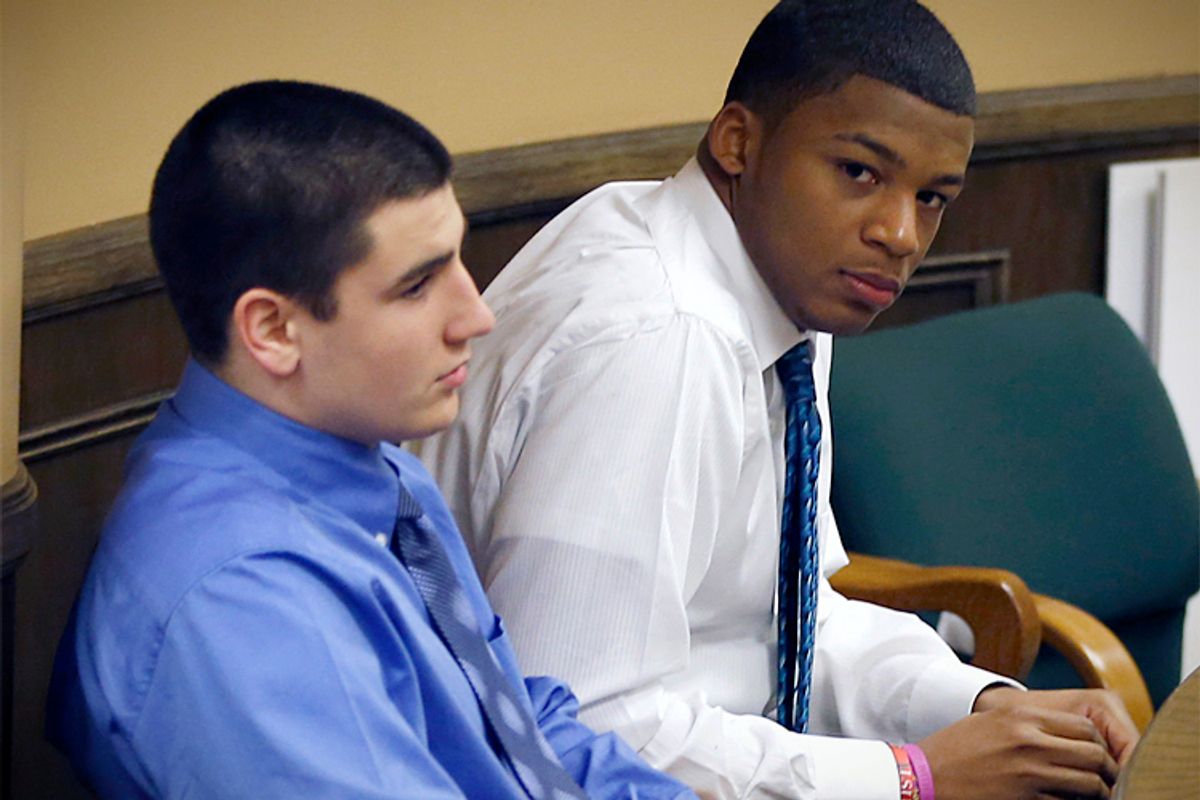 It's a case that's shown the world that an outpouring of public compassion and sympathy is possible in the wake of a sexual assault. But not for the victim. Behold, if you will, the abundance of it directed at its now-convicted assailants.

Long before 17-year-old Trent Mays and 16-year-old Ma’lik Richmond were declared guilty in juvenile court on Sunday of raping a Steubenville, Ohio, classmate, they were already being cast as the story's victims. Those poor boys – young athletes with their whole lives ahead of them – until one fateful night changed everything. Just last week, ABC News declared that "the juvenile trial set to begin there is every parent's nightmare" -- because having your child on trial, not being raped and abused, is a parental nightmare. The story's final line? Not about the victim, but about the boys, "who face incarceration in a detention center until their 21st birthdays and the almost-certain demise of their dreams of playing football." And this weekend, when the verdict was handed down, CNN's Poppy Harlow lamented to Candy Crowley, "I've never experienced anything like it, Candy. It was incredibly emotional — incredibly difficult even for an outsider like me to watch what happened as these two young men that had such promising futures, star football players, very good students, literally watched as they believe their life fell apart." Crowley seemed to agree, pondering "the lasting effect of two young men being guilty in juvenile court of rape, essentially." You know, essentially.

Boo-hooing in the wrong direction wasn't invented in Steubenville. So prevalent is the trope that the Onion made fun of it two years ago -- right around the time that the New York Times was reporting on a town's agony over "how could their young men have been drawn into" gang-raping an 11-year-old girl in Cleveland, Texas, sympathetically quoting a resident who noted that "These boys have to live with this the rest of their lives."

And as the heated response to Zerlina Maxwell's recent radical suggestion that we need to "train men not to grow up to become rapists" also proved, we are a very long way from grasping the notion that sexual assailants aren't always faceless monsters with lengthy rap sheets. The idea that a rapist could be a good-looking, popular guy with a "promising future" doesn't jibe with the comfortable, easily compartmentalized image of him as a glowering sketch of a guy in a ski mask on a Wanted poster. We don't like to imagine that a rapist could be a classmate or a friend or a son. Certainly not a young man who belongs to our idolized class of individuals – our athletes.  We love our boys. We love them to the extent that we couch their sex crimes in terms of how terrible the course of justice is for them.

Yet in a story that has from the beginning been so much about social media, it's encouraging that the reaction to the media's "poor babies" coverage has not gone quietly unremarked upon. After CNN's Sunday pity party for Mays and Richmond, a Change.org petition demanding an apology swiftly garnered over 140,000 signatures – and it's still growing. More important, though, cases like Steubenville – and the public conversation around them, conversation that extends far, far beyond the voices of cable news bubbleheads – is an opportunity to rethink what we believe about rape and rapists. And it doesn't have to start completely from scratch.

There's no question that the first object of concern and compassion in any story of rape should be the victim. It sure as hell would be nice to see, for instance, in the story of Steubenville, a little less emphasis on how big a party girl the victim may or may not have been and a little more understanding that an unconscious girl is not an asking for it girl. And it also would be nice if that knee-jerk sympathy for the assailants could be redirected into something bigger than pity for the careers they won't get to have. In one of the best observations on the case yet, Henry Rollins asked, "What made these young people think that that what they did was okay? What was in their upbringing, the information and morals instilled in them that allowed them to do what they did, minute after minute, laughing, joking, documenting it and then calling it a night and going home? Out of all the people who were witness to what happened, why wasn’t there someone putting a stop to it?" What happened with the individuals involved in the case – not just with Mays and Richmond but the partygoers who documented it, who laughed and joked about it – truly is something to feel saddened and upset about. There is compassion to be had for all of them, for everything that they did -- and didn't -- get in their lives up to the night they participated in something that they should have known was horrible. There's so much loss, so much waste in that narrative. As Rollins asks, "Where in the information chain were the two offenders made to understand that what they did was not wrong on every possible level?… Education, truth, respect, equality—these are the things that can get you from a to b very efficiently."

An evolved society is one that extends understanding and forgiveness for its offenders. But not because it's such a goshdarn shame some kids can't play football now. We have to look at what happened in Steubenville, what happened in Cleveland, Texas, what happens on college campuses and in marital beds and military bases  every single day and recognize that rape is not a crime that is just perpetuated by what Sean Hannity recently flippantly called "evil" men. We have to see that one of the tragedies here is how badly we are failing our men and boys, every time we pretend that rape is something that happens entirely because of a how girl dresses or how much she drinks. We have to believe when Ma’lik Richmond's father says, "I'm sorry for what you all had to go through, and I hope somewhere in your hearts that you can forgive Trent and Ma'lik for the pain that they caused your daughter and put you through. I’m gonna bear his pain with him. I'm sure Trent and Ma’Lik will learn a valuable lesson from this and become productive citizens in this world one day." We have to hope that those boys can indeed learn what it means to be a man from all of this. We have to teach then. So that one day, they can teach their own sons.