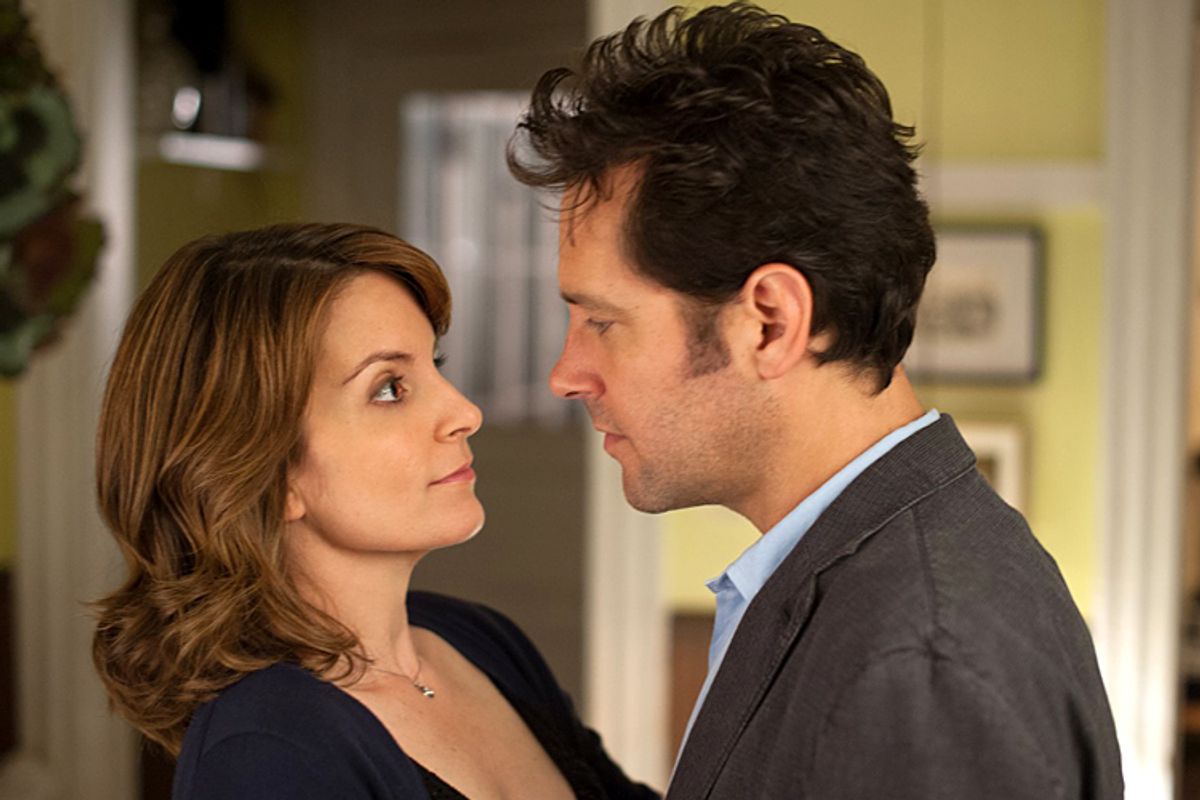 Is someone deliberately sabotaging the movie careers of beloved TV comedy actors? Or is some inexorable force of Marxian historical overdetermination at work, compelling Steve Carell and Tina Fey to make the kinds of sub-mediocre, machine-produced formula pictures that would once have starred Vince Vaughn and Jennifer Aniston (and may yet!), and so rendering irrelevant all the qualities that made them irresistible on television?

I’m being slightly unfair to “Admission,” a rambling, well-meaning and largely unfunny Ivy League comedy that tries to establish Fey – famed for her Sarah Palin impersonation on “Saturday Night Live” and her star/writer/creator role on “30 Rock” – as a rom-com leading lady. That doesn't turn out to be a good idea, but my actual point was that Vince Vaughn would never have taken the role Paul Rudd actually plays, as the do-gooder founder of a crunchy alternative high school in the New England woods. The movie’s just too boring and middlebrow; there’s not enough sports talk or jokes about how chicks are maddening and gays are, you know, so gay.

Indeed, if “Admission” has anything going for it at all, which is debatable, it’s precisely that quality of PG-13 niceness. You can take the kids, you can take grandma; everyone will be ever so slightly entertained. No demographic groups are ever insulted and abused, with the brief possible exception of straight white men (who can take it, frankly) and Virginia Woolf scholars, in what I would argue is the only genuinely funny scene. Then again, Rudd’s character, an altruistic single dad with an adopted Ugandan son, proves to be such a sterling example of straight white maleness that all of creation quails before his seraphic nature, including Portia (Fey), a tightly wound Princeton admissions officer. The bitchy, home-wrecking Woolf scholar (a bit part for Sonya Walger, the leggy British star of “Lost,” “FlashForward” and “Common Law”), on the other hand, goes unredeemed.

Still, I wish I understood the thought process behind making a movie like “Admission,” which is directed by industry veteran Paul Weitz (of “Little Fockers” and “American Pie”) and adapted by screenwriter Karen Croner from a novel by Jean Hanff Korelitz. Actually, I don’t wish I understood it; that’s a figure of speech. The film seems based on demographic guesswork generated by reading the first half of some navel-gazing trend article in the Sunday New York Times: Women in their 30s and 40s are the romantic-comedy audience; those women are also Tina Fey’s fan base; they’re also the “helicopter parent” generation, maniacally obsessed with steering their offspring into elite colleges. Eureka! Comedy gold.

Except that it’s hard to imagine anyone, anywhere, at any social stratum, not being simultaneously bored and irritated by “Admission.” Actual alumni, parents and so forth of Ivy League institutions are not the audience envisioned for mainstream comedy, let’s face it, and will find this movie inane and lacking any satirical edge. And who outside that rarefied realm would even theoretically be interested in this story and its setting? Especially in an era when most of us are facing the reality that even if our kids get good grades, terrific test scores and develop cold fusion in their spare time, there’s no way on God’s green earth to pay for Princeton once they do get in. (Full disclosure: My wife graduated from Princeton, and did not emerge as a huge fan of the place.)

Fey isn’t a disaster in a straightforward acting role, but she’s not all that memorable either. Portia is a damped-down character, neurotic but not nuts and pretty but not sexy, and Fey often seems nervous and edgy next to the sunny, calm underacting of Rudd, who’s been good in a lot of roles in a lot of mediocre movies in the last three or four years. Control-freak Portia gets dumped by her bearded English-prof boyfriend (Michael Sheen) right about the time she meets John (Rudd), who’s pushing an autodidact senior from his wood-chopping, calf-birthing alternative high school in rural New Hampshire as a Princeton candidate. We see where almost all of this is trending right away, but one of many reasons why the movie is dumb is that this kid, a bright but strange reclamation project named Jeremiah (Nat Wolff), is clearly wrong for an ultra-competitive Establishment-oriented canal like Princeton. Even within the realm of elite education, send him to Bard or Oberlin or St. John’s College or any of the other schools better suited to outsider genius types.

But Princeton is our setting, and there’s some awkward comedy involving the outgoing admissions dean (Wallace Shawn) and his chagrin that the school has fallen to No. 2 in the U.S. News & World Report rankings. Then there’s the fact – spoiler coming, although the movie’s ad campaign gives it away for free – that John suspects Jeremiah may be the kid that Portia herself gave up for adoption years ago, when she was herself an Ivy League undergrad. Throw in Travaris Spears as John’s adorable African sprat, Gloria Reuben as Portia's admissions-office rival and some saucy zingers from Lily Tomlin as Portia’s bike-riding radical feminist mom – a version of the role Jane Fonda played last year in “Peace, Love & Misunderstanding” – and you have adequate setup for a vague, feel-good comedy that lasts way too long without ever getting anywhere.

One way of explaining the problem with this kind of movie, especially relative to TV, is that Hollywood producers at this budget level are still trying to broadcast to as wide an audience as possible, so the academic jokes can’t be too insidery and the ‘70s references have to be super-general and the supposed drama of “Omigosh it’s impossible even for really bright kids to get into Princeton!” has to be rooted in bogus ideas about “relatability.” Television comedy, on the other hand, remains inexpensive to produce and is often aimed at a narrow demographic slice of the viewership (“Girls” would be the example of the moment). None of that explains why "Admission" runs at least a half-hour too long and isn't funny, mind you. And the results of all this overthinking can be paradoxical: The finale of Fey’s “30 Rock” drew about 4.9 million viewers, which isn’t all that great for network TV. But faced with the bad reviews and blah word of mouth they’re about to get, the producers of “Admission” would take that in a heartbeat.