Is JPMorgan a farmer? 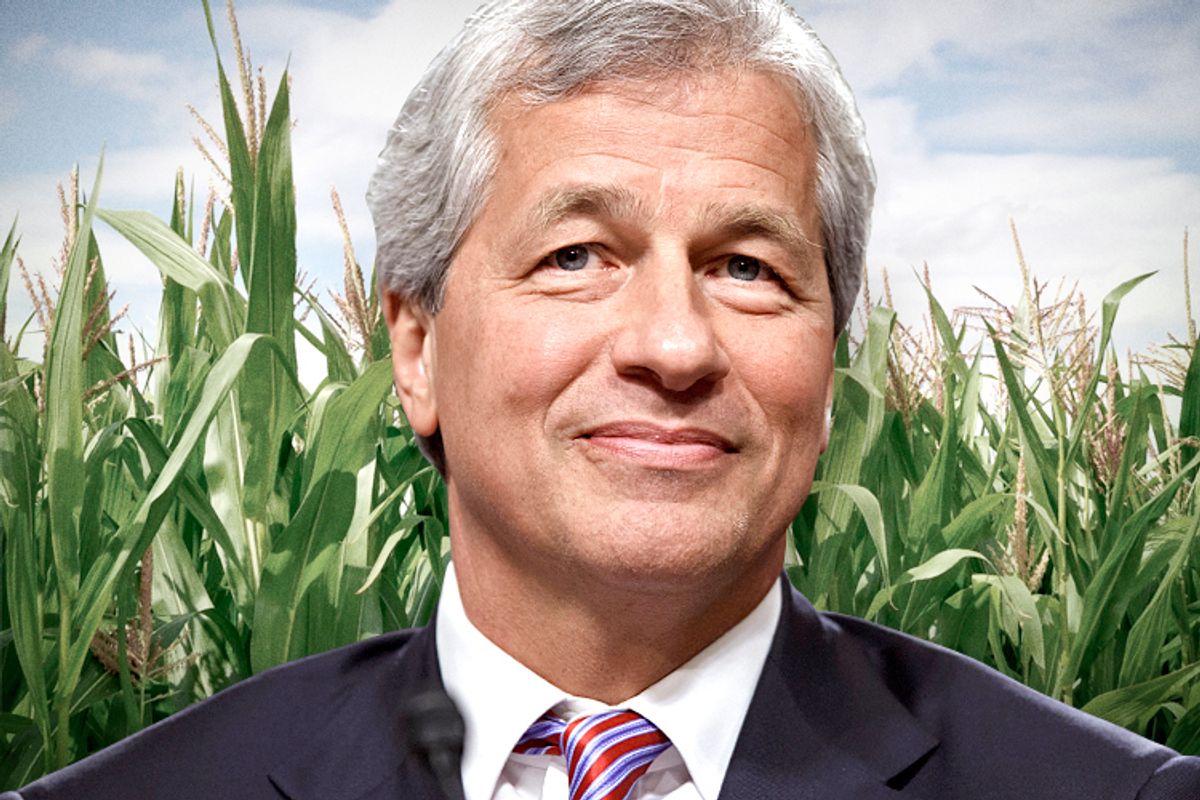 Imagine you’re a finance lobbyist and want to move deregulation and other industry-friendly policies through Congress. While you might think the House Financial Services Committee would be the logical place to do it -- since it has jurisdiction over financial issues, naturally -- what if there were a sneaky way to maneuver it through a far less scrutinized committee, so most people would have no idea what you were doing?

This is the story of how the world’s largest banks came to love the House Agriculture Committee.

In Washington, we often witness politicians forgetting the lessons of a year or five years or 10 years ago. It takes some special obliviousness to forget the lessons of Friday. Five days ago, Sen. Carl Levin, D-Mich., delivered a critical report and held an explosive hearing detailing the “London Whale” trades, made by a JPMorgan Chase satellite office in London. As you may have read, these trades turned sour and led to a $6.2 billion loss for the bank in a matter of weeks. More important, JPMorgan misled regulators about the nature of the trades, altered its internal processes to take on more risk, and then hid the losses by improperly mismarking the value on its balance sheet, pretending the shortfall was inconsequential to avoid oversight and present a positive financial picture to investors.

The Whale trades, which totaled $157 billion at their peak, are known to the industry as derivatives, massive bets on bets that present outsize risk to financial institutions and the broader economy. And of course, derivatives helped fuel the financial crisis of 2008.

But less than a week after the Levin report, the House Agriculture Committee will hold a markup session today on seven bills designed to gut derivatives regulations passed in the Dodd-Frank financial reform law. If the bills pass, practically every improper and illegal action that JPMorgan Chase took in the London Whale debacle would be either made legal or allowed to foster outside of regulatory oversight. It borders on unthinkable that lawmakers on both sides of the aisle would pick this moment to undermine derivatives rules, right when we get a case study in the dangers of bank misuse of derivatives. (As Bartlett Naylor of Public Citizen told Salon, “At least the NRA isn’t proposing that all citizens should be allowed to own surface-to-air missiles in their homes.”)

You may be asking yourself why some bills on financial regulation run through the House Agriculture Committee. It turns out that the Agriculture Committees have held jurisdiction over derivatives since the mid-19th century, when farmers used derivatives to achieve stability over future prices. Traders still use derivatives for corn and other commodities, but the world of derivatives has grown far more sophisticated over the decades. Nevertheless, congressional committees zealously guard their jurisdictions, and so a bunch of lawmakers from rural states get to determine a major aspect of financial policy.

It’s not as if the House Financial Services Committee actually has more expertise on these issues; most members of Congress take their cues from what they hear from financial lobbyists. All those Wall Street campaign contributions don’t hurt, either. But one advantage the finance lobby gains by working deregulation through the Ag Committee is that they can work in relative anonymity. The Ag Committees simply garner less attention from the press and the public at large, making it easier for Big Finance to operate.

To see how this all works, just look at the hearing on these derivatives bills, held last week. When Ag Committee chairman Frank Lucas wasn’t openly parroting industry scare tactics about energy price spikes from regulation, he called on a list of witnesses that included four industry trade group representatives and one public advocate from Americans for Financial Reform, Wallace Turbeville. (He did great.) Or for an even clearer indication, read these PowerPoint slides created for Ag Committee staff by the Coalition for Derivatives End-Users, an industry-backed lobbyist organization. This extremely one-sided perspective on the issue simply becomes the default position for committee members and their staffs, an example of the “cognitive capture” in D.C. that sidelines alternative voices. And it all happens under the radar.

In this case, a bipartisan collection of Wall Street-friendly congressmen pitched these bills to the Ag Committee as mere “technical corrections” that would prevent “unintended consequences.” In the House, the effort is led by Jim Himes, a former Goldman Sachs vice president who represents the Connecticut bedroom communities of Wall Street traders. Himes, who has aggressively defended the bills, was also just named the national finance chairman of the Democratic Congressional Campaign Committee, the campaign arm for House Democrats. So this effort to bestow gifts on Wall Street comes from the very congressman who has to raise money for his colleagues in the midterm elections, presumably from the same bankers he’s aiding. And of course, his role as finance chair makes him extremely important to his fellow members, who then trust him as he drops legislation to gut derivatives rules.

What we get in the end is a set of bills with Orwellian titles like the “Swaps Regulatory Improvement Act” and the “Inter-Affiliate Swap Clarification Act.” But amid all this improving and clarifying is a near-total rollback of the mild derivatives regulation that made it through Dodd-Frank. For example, HR 992, the aforementioned “Swaps Regulatory Improvement Act,” would virtually nullify Section 716 of Dodd-Frank, the so-called push-out rule. One of the bigger problems with the London Whale trade is that they gambled with “excess deposits,” funds deposited by ordinary Americans that had not been loaned out. JPMorgan was essentially gambling with FDIC-insured money, secure in the knowledge that major losses would be borne by the public while profits would stay in the bank. Section 716 would push out derivatives activity to a separate, fully regulated subsidiary backed by its own capital and responsible for its own risks, far from the insured deposits.

But HR 992 massively expands the exemptions to Section 716, allowing virtually any kind of derivative risk to remain housed inside the insured depository institutions. Marcus Stanley of Americans for Financial Reform writes that, “HR 992 is supported by major Wall Street banks for one simple reason – because it is cheaper for them to engage in derivatives dealing when their activities receive a public subsidy through access to the taxpayer-supported safety net.”

The other bills in today’s markup travel well-worn paths the financial industry uses to work in the shadows. HR 677, the “Inter-Affiliate Swaps Clarification Act,” would allow financial entities to move swaps, a type of derivative, between its various affiliates. It’s not difficult for JPMorgan Chase or Goldman Sachs to shift their derivatives into any one of literally thousands of affiliates, especially those that afford the least possible oversight of their activities.

Another bill limits jurisdiction by the Commodity Futures Trading Commission on derivatives trades outside the U.S. – precisely the kinds of trades we saw U.S. bank JPMorgan Chase engage in at its London office. Another bill would force the CFTC to make a number of new “cost-benefit” analyses on any proposed rules, simply forcing delays in rule making that banks and their lobbyists exploit to maintain the status quo. Wall Street has become so successful at these delaying tactics that only one-third of the proposed rules under Dodd-Frank have been implemented.

I asked Bartlett Naylor of Public Citizen what would be the worst possible outcome if these Wall Street-backed Ag Committee bills passed into law. “The worst would be an inter-affiliate swap, hidden, moves trades from the U.S. to the U.K., escapes oversight, blows up, and the trades are located inside the bank, which now needs a bailout.” This describes almost exactly the London Whale trade, proving why this activity must be tightly regulated in the public interest.

About the only time any Agriculture Committee has approved firm regulation on derivatives trading in recent memory came in 2010, when Blanche Lincoln, spooked by a progressive-led primary challenge, unexpectedly cracked down on the industry in an effort to strike a populist pose.

This shows the power of making meaningful change in Washington simply by raising awareness of an issue. Wall Street and their allies in Congress hope you forget this lesson, turn away from what’s happening in the House Agriculture Committee today, and let them roll back any restrictions on the very activities that could cause another financial crisis. And they really hope you’ll think that all the Agriculture Committee does all day is talk about agriculture.