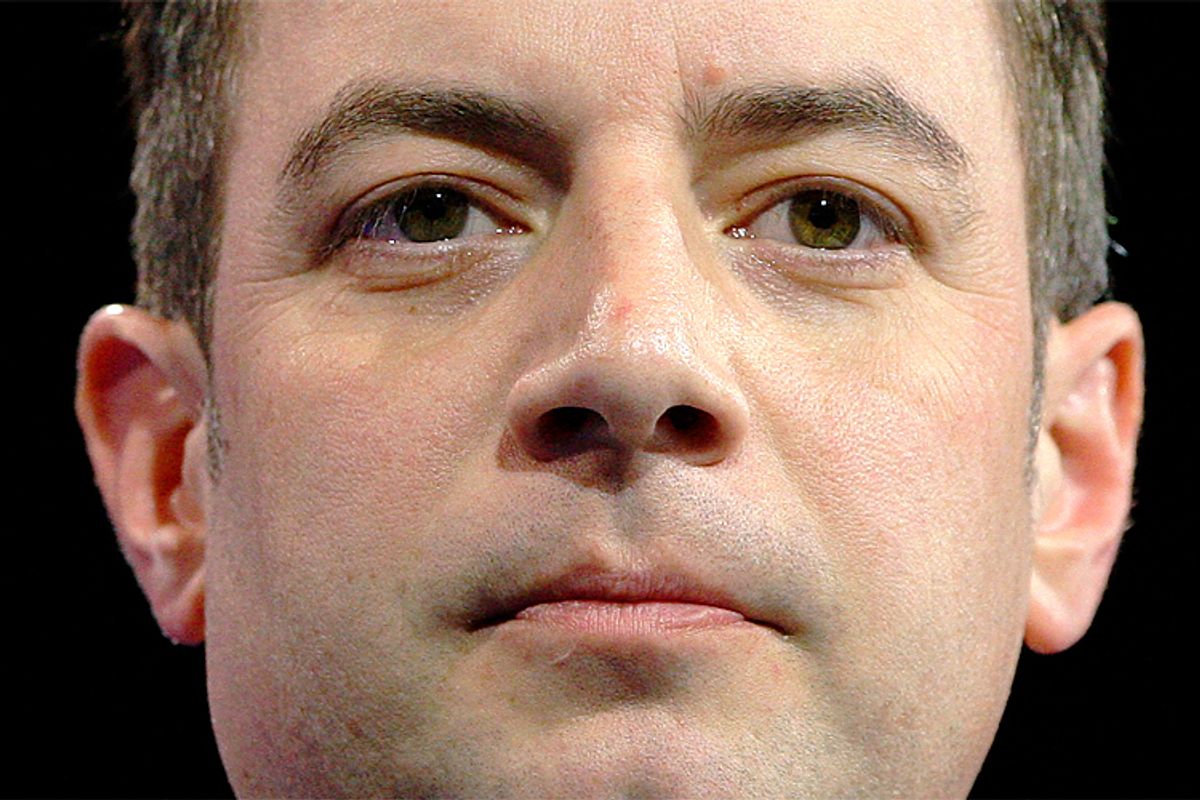 I gave Reince Priebus and his minions too much credit the other day. His “autopsy” of the Republican Party’s disastrous 2012 election cycle mostly involved vague and frothy messaging advice, but I suggested that it might herald a different attitude toward gay rights.

Not so fast. Priebus is now reassuring religious conservatives that he doesn’t think the party should change its policies or principles to attract gay voters. “I know what our principles are, I know our party believes marriage is between one man and one woman,” Priebus told MSNBC’s Luke Russert on Wednesday. “But I also know our party’s going to be inclusive, and it’s going to listen to people and it’s going to allow for differences in our party.”

Priebus got into hot water with the religious right not so much for the report’s language about gay voters – it merely recommended “outreach,” while fretting that the party’s anti-gay stance was alienating young voters. It was his decision, in his press conference, to praise Sen. Rob Portman for coming out for gay marriage (while revealing that his son is gay) that caused him trouble.

“I think Sen. Portman made some pretty big inroads last week,” Priebus told reporters. “I think it’s about being decent. I think it’s about dignity and respect — that nobody deserves to have their dignity diminished, or people don’t deserve to be disrespected. I think there isn’t anyone in this room — Republican, Democrat, in the middle — that doesn’t think Rob Portman, for example, is a good conservative Republican. He is, and we know that.”

Of course, when the Washington Blade asked whether that meant Priebus supported Portman’s stand on gay marriage, the chair demurred. “It’s his decision,” Priebus said. “It’s not a matter of whether I support his decision; I support him doing what he wants to do as an elected person and as American. If that’s his opinion, I support him having that opinion.”

That wasn’t enough for the religious right: Brian Brown, the president of the National Organization for Marriage, told the National Review Priebus was “definitely” too soft on Portman. “This is a critical issue, and to act like it’s just no big deal is just wrong,” he says. Ralph Reed seemed to agree, at least when talking to the National Review. “If the Republican Party tries to retreat from being a pro-marriage, pro-family party, the big tent is going to become a pup tent very fast,” he said. “I am concerned that some in the party are going wobbly on this issue.” But talking to BuzzFeed, he insisted that Priebus was “a deeply committed Christian. He's pro-life, pro-marriage, and pro-family ... and the Republican Party is going to stay that way."

Priebus made that clear in his remarks to Russert today.

So let’s reiterate: The RNC’s “autopsy” is an exercise in trying to reassure a majority of American voters the party wants their votes – but it doesn’t want to change its policies to win them. That’s clearest when it comes to African-Americans: As former chairman Michael Steele notes, it’s impossible to argue that you want people’s votes when you’re trying to make it harder for them to vote in the first place. It’s very clear when it comes to women: Priebus and friends want to combat “Democrat” rhetoric about “the war on women” without changing the policies on pay equity, contraception, choice or safety net spending that alienate women voters.

Political reality may lead to a genuine policy shift on immigration reform, to give the party a fighting chance with the fastest growing segment of the American electorate, Latinos. But even there, 2016 hopefuls like Jeb Bush and Rand Paul take a step forward, and then a step back. (Although it’s hard not to enjoy Paul’s appreciation of “the romance of Latin culture” in his speech to the Hispanic Chamber of Commerce this week. Really. He said that.)

McKay Coppins has an interesting piece about how religious conservatives are concerned that the Priebus report proves the party is trying to leave them behind. Really, they have nothing to worry about. Priebus and friends are ready to continue to let them run the party platform and dominate its policies – if they can just keep from making unpleasant remarks about “legitimate” rape.