The end of the rainbow for Dr. Oz?

The TV doc gives a platform to a lot of quacky things. But what got him slapped with a lawsuit will surprise you 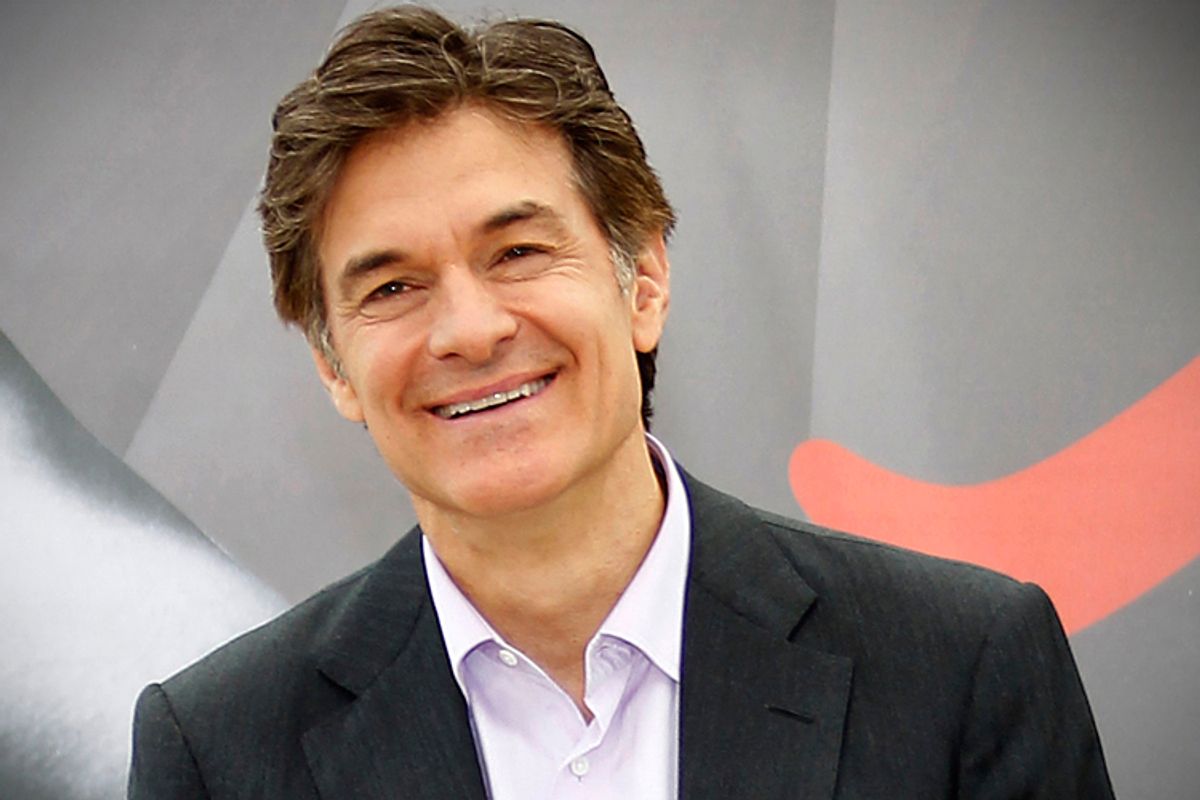 When you're a famous doctor with a daily TV show, you've got to be careful about the claims you make. You've got to tread the line between giving entertaining sound bites for daytime viewers and knowing how to avoid giving any advice that could get you in hot water. So it was perhaps inevitable that cardiac surgeon, People Magazine Sexiest Man and television personality Dr. Mehmet Oz would find himself on the receiving end of a lawsuit from an unhappy viewer. What's surprising about it is the cause.

Earlier this week, 76-year-old Frank Dietl filed suit in Manhattan's Supreme Court, saying he'd received third-degree burns on his feet after sleeping with heated rice-filled socks as Oz recommended in a show last year. Dietl says he has neuropathy, which diminishes sensation in his feet and made him unable to realize he was being burned. The show's spokesman, meanwhile, issued a statement that it stands by "the content in our program as safe and educational for our viewers." Ah, good old educational Oz.

Dr. Oz first made a big name for himself a decade ago, in the high flowering of pop alternative medicine – a guru who guested on "Oprah" to dispense common sense and demystify good health. Authoritative, practical and plain-spoken, Oz became a superstar of integrative ideology and basic common sense. But in recent years, the good doctor has turned his talk show into a showcase for a variety of dubious subjects and advice. In a New Yorker profile earlier this year, Michael Specter noted that "Oz has been criticized by scientists for relying on flimsy or incomplete data, distorting the results, and wielding his vast influence in ways that threaten the health of anyone who watches the show."

Some of it has been pretty minor stuff, like butt-busting brownies and a fast-food diet. Some of it's been considerably dicier. He's railed about arsenic in apple juice, sending the FDA into attack mode. Last year he "investigated" reparative therapy, asking, "Is there a gay cure?" and welcoming "experts on both sides" -- including the National Association for Research and Therapy of Homosexuality.  Though he claimed on his blog that "I have concerns about the potentially dangerous effects when the therapy fails," he also defended the show and its guests, saying, "You have to present multiple perspectives."

And while Dr. Oz explicitly states that he does not endorse "any brand name or commercial supplier," all it takes is one mention of an exciting! possible! breakthrough! -- usually concerning looking younger or losing weight – for anything to do with it goes flying off the shelves. He's devoted shows to ways to "supercharge your body with human growth hormone"  and started a run on SeroVital -- despite the fuzzy evidence of its effectiveness.  He examines green coffee beans for weight loss, and zing! suddenly coffee bean extract is a thing.

Last month, Oz did an episode about the HCG Diet, and featured the glowing testimonial of Dr. Sheri L. Emma on his website --  with a handy link to her own site and its $149.95 "starter kit." He's invited the controversial Dr. Joseph Mercola on repeatedly, gently stating that he doesn't agree with everything the man says but praising him for "defying convention and thinking largely outside the box." Mercola's outside-the-box thinking: advising against mammograms and selling an $8,000 "Whole Body Vibration Training Machine" on his website. Unsurprisingly, he has inspired the FDA to warn him about his claims, more than once. When Mercola said sunscreen promotes cancer and recommended tanning beds for Vitamin D, Oz responded, on his show, that "My bottom line -- I am rethinking tanning beds. In the last year I have looked at a lot of information. …I think there is a value of UVB radiation, not just for vitamin D but for other sources as well. I am not interested in this as a tanning solution … I am interested in the health benefits of it, and for some people it might make sense." It was a statement Oz later waved off with his smartypants explanation that "As a doctor, it is my natural inclination to evaluate and question emerging information." Which was a pretty funny response to his own episode about "The Alternative Medicine Guru Who Says You Shouldn't Trust Your Doctor." Guess it depends who the doctor is.

So if, of all the wildly expensive, questionably out there things that Dr. Oz has given a platform to on his show, the thing that has landed him in a lawsuit is the old rice-in-a-sock compress remedy, there's a strange poetry to be found in there. And if you're looking for further evidence the universe may have a sense of humor on the topic of Oz and the "emerging information" he so promiscuously offers, it's notable that the lawsuit was filed on Monday. The topic of Oz's show that day? "The Biggest Scams Threatening Your Health."