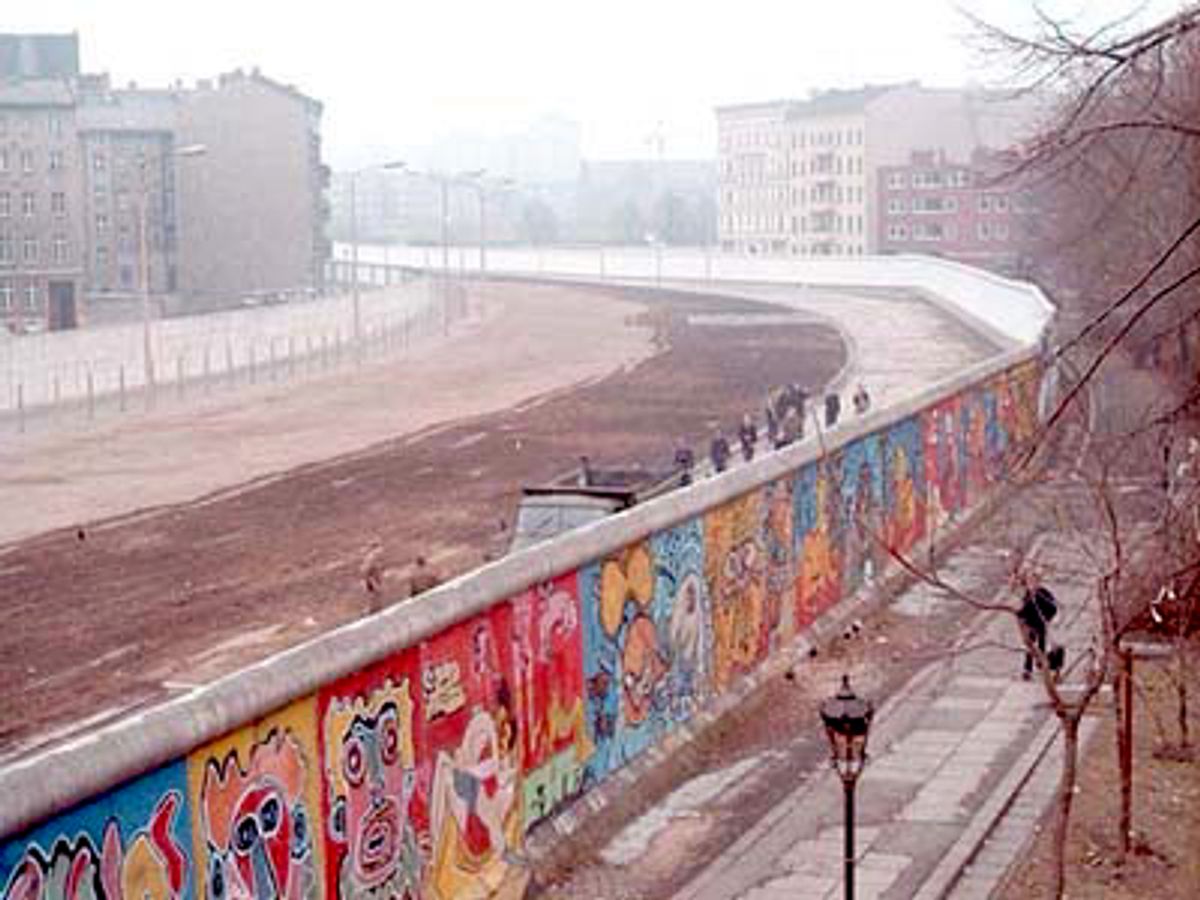 New York’s East 53rd Street, between Madison and Fifth Avenues, is full of nondescript Manhattan skyscrapers. In the courtyard of one of these clinically clean buildings, however, there are five crumbling, old slabs of concrete covered in graffiti. It’s hard to believe that these blocks, so out of place in their surroundings, were once part of one of the most politically charged structures in the world, one that divided the globe in two based on ideology and geopolitics — the Berlin Wall.

Over more than 87 miles and 25 years, the wall divided Berlin between East and West, standing as a symbol of division and tension, an almost impossible hurdle to millions of immigrants and political refugees. After its fall, the government of East Germany sold pieces of it to people and entities across the globe; these particular slabs were purchased by Jerry Speyer, of NYC developer Tischman Speyer, and installed on East 53rd Street in 1990 for the enjoyment of the public. In their new context, however, they’ve lost almost all of their political meaning and significance, particularly on a cold Sunday afternoon when I’m the only visitor. They stand impotently dividing nothing, demarcating no place. Context is what gives architecture power, and in 2013 New York, old Berlin means nothing.

9 + 1 Ways of Being Political: 50 Years of Political Stances in Architecture and Urban Design, a current exhibition at the Museum of Modern Art, just a few blocks away from those pieces of the Berlin Wall, traces the politics of the global built environment, tactfully avoiding reference to structures as beyond monumental and instrumental to the collective unconscious as the Berlin Wall. Organized by MoMA curators Pedro Gadanho and Margot Weller, the exhibition focuses more on functional structures and ideas that exist both in reality and only on paper, from places as diverse as New York, Seville, Japan, and Medellin, Colombia. With a selection of just over 100 pieces, arranged in a purposefully structured and contained manner atypical of architecture and urban design exhibitions, 9 + 1 Ways of Being Political traces the last five decades of political public design in a nonlinear, thematically arranged manner, alternating between gallery-white and eye-popping red walls.

The first way of being political, “Radical Stances: 1961–1973” presents neo-avant-garde architectural ideas. These are most succinctly expressed by the imposing and somewhat nihilistic 1976 lithograph by German Gunter Rambow,“Utopie Dynamit,” which shows a skyscraper exploding in the sky. This piece drew a large crowd during the several visits I made to the exhibition, probably due to its impressive scale and shocking, almost disturbing, imagery located right at the show’s entrance.

Directly adjacent, the second way of being political, “Fiction and Dystopia: 1963–1978,” also presents several dystopic urban landscapes, such as Bernard Tschumi’s “The Manhattan Transcripts” (1976–81) and “Exodus, or the Voluntary Prisoners of Architecture” (1972), a collaboration between Dutch Rem Koolhaas and Madelon Vriesendorp and British Elia and Zoe Zenghelis. Both projects present fiction and narrative as an alternative form of critique as well as complement yet contradict Rambow’s explosive lithograph. Tschumi’s contribution involves drawings of a series of four violent, imagined episodes in New York, including a murder in Central Park, violent sexual events on 42nd Street, and a fall from the top of a Manhattan skyscraper. “Exodus” presents a vision of London cut with tall barriers, the only reference to Berlin during the Cold War in the exhibition. Koolhaas, Vriesendorp, and the Zenghelis couple create a prison on the scale of a metropolis, which paradoxically also served as a refuge, referencing the condition of urban confinement as well as the geopolitical condition of Europe in the early 1970s.

Along the back wall of the exhibition, the visitor weaves through the third, fourth, fifth, and sixth ways of being political, titled respectively, “Deconstruction,” “Consuming Brandscapes,” “Performing Public Space,” and “Iconoclasm and Institutional Critique.” These sections cover a broad chronological swath of time, from 1969 to 2011, and include some incredibly important pieces in the MoMA collections of art, architecture, and urban design. The most noteworthy include the 1975 film “Conical Intersect” by Gordon Matta-Clark, in which the artist literally deconstructs Parisian structures to reveal the urban landscape that mills on the other side of seemingly impenetrable walls, and Barbara Kruger’s “I shop therefore I am.” Kruger’s piece is a standout: the vernacular visual language resonates with a contemporary audience, and the work demonstrates the commentary on consumerism and corporate branding at the core of Kruger’s oeuvre. The piece also echoes the red, white, and black colors that swim around the exhibition.

The back wall of the show culminates with two iconic Ai Weiwei photographs from the MoMA collection: “White House” and “Tiananmen Square” from the Study in Perspective series, in which the controversial Chinese artist gives the middle finger to iconic sites around the world. While the museum’s collection contains many other pictures from this series, it’s clear that Gadanho and Weller selected the two images that most concisely articulate the title of the section, “Performing Public Space.” The two places, the White House and Tiananmen Square, exist in the contemporary imagination in direct contrast to one another as spaces in which the performance of international power happens.

The eighth way of being political, “Occupying Social Borders: 1974–2011,” is the highlight of the exhibition. In particular, it was the video of San Diego–based Teddy Cruz’s “Radicalizing the Local: 60 Linear Miles of Trans-Border Urban Conflict” project that captured my imagination and kept sending my mind back to East 53rd Street and Berlin. The simple and poetic way in which Cruz’s team managed to allude to the ongoing border conflict on either side of the Rio Grande reminded me of the naive words innocently painted on Berlin’s East Side Gallery that read, in childishly colorful letters, “No More Wars, No More Walls, A United World.” When a potent symbol of division like the Berlin Wall is erased, it’s easy to forget the boundaries that still partition key areas of the world and delineate territory in an almost arbitrary way, such as the San Diego/Tijuana border, which was surveyed by Cruz and his associates.

Cruz’s practice is emblematic of the new generation of socially conscious designers, who assuage politics in favor of a more subtle and less grating analysis of social realities. The video confronts the conflict of the border areas with a large graphic, displaying the changing landscape and circumstances of infrastructure and social policy. The project dramatically yet poetically asserts how the visual landscape reflects the economic and structural inequalities that exist in such close proximity.

The show closes with “Politics of the Domestic: 2002–2011,” where two works in two MoMA spaces are in dialogue with each other. The video “Burn,” by Reynold Reynolds and Patrick Jolley, occupies the final alcove in the galleries, while the recently acquired performance piece “IKEA Disobedients,” by Madrid-based Andrés Jaque Arquitectos, was performed at MoMA PS1 in Long Island City in September. Both works address how the reality of domestic life within the architectural space differs from the traditional model of domesticity as espoused by popular culture or, in the case of the PS1 work, the IKEA catalogue. However, while “IKEA Disobedients” encourages audience participation in a broader discussion of the politics of domestic life, “Burn” connects more with the dystopic images from the earlier sections of the exhibition. While a house burns from the inside, Reynolds’s and Jolley’s characters seem to be oblivious to the impending disaster and continue to go about their stoic, quotidian lives. Instead of the engaging discourse on utilizing domestic architecture in nontraditional ways, as in “IKEA Disobedients,” “Burn” offers introverted characters oblivious not only to the viewer but also to the fire that threatens their existence.

The way that Gadanho and Weller guide audiences through the space of the galleries and use on- and off-site elements to speak to one another make 9 + 1 Ways of Being Political a thought-provoking exhibition. The show is succinct and comprehensive, and highlights that even in the most seemingly apolitical and domestic architectures, there are political statements to be made, detected, and debated. While perhaps a project deserving of a bigger space and more didactic materials to fully engage viewers, 9 + 1 Ways of Being Political most importantly identifies the political and urges audiences to ignore the jarring connotations this word has acquired and instead realize how integral the political is to the public and domestic, iconic and vernacular architecture and urban design.