Steubenville rapists can be saved

For all the justified outrage at the Steubenville offenders, rehab can and does work. Their lives are not "over" 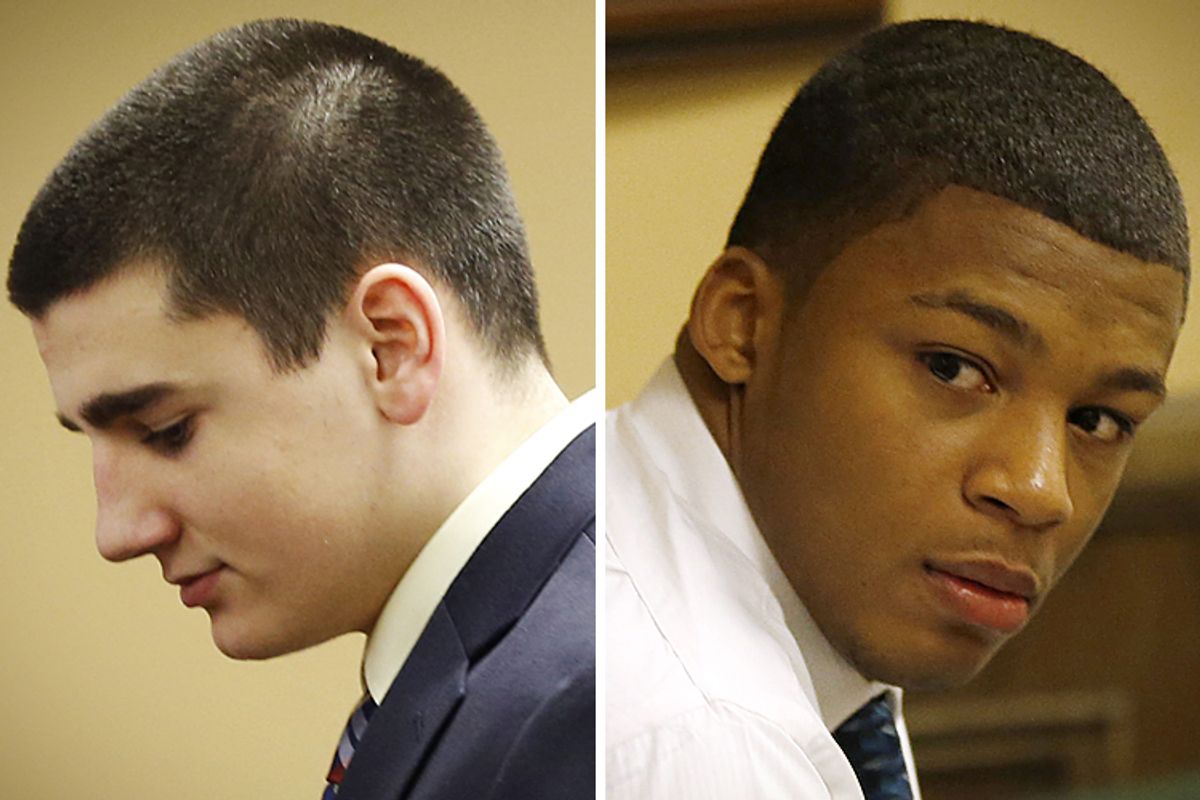 When the lawyer for Ma’lik Richmond, one of the two teens convicted in the Steubenville rape case, went on "The Piers Morgan Show" Tuesday night and said his client would appeal the verdict, he sounded, well, like a rape apologist. It was unfair for Richmond to be on a sex offender list, the lawyer, Walter Madison, had argued, because “I don't believe that a person at 75 years old should have to explain for something they did at 16 when scientific evidence would support your brain isn't fully developed.”

Incredulous, Morgan retorted, “I got three teenage sons and when you get to 16, 17 ... your brain's developed enough to know you shouldn't be raping girls."

But here's the thing: While Richmond and his fellow offender Trent Mays are justly being held accountable for their crimes, Madison was actually citing medical consensus.

“They have not completed their neurological development. That carries through until their early 20s,” says Elizabeth Letourneau, associate professor at the Bloomberg School of Health at Johns Hopkins and the director of the Moore Center for the Prevention of Child Sexual Abuse. “They don't attend as much to the downside of what they're going to do as much as they attend to the pleasure or reward. Their brains are in fact different and cause them to behave differently.”

And it matters, because the main reason researchers argue that juveniles found guilty of sex crimes don't belong on the sex offender list is the copious evidence that they're susceptible to treatment -- and are unlikely to reoffend.

When CNN’s Poppy Harlow offered immediate sympathy to the young men, rage rightly came down on her and her colleagues for failing to focus on the victim’s suffering. But when it came to the perpetrators themselves, bemoaning the ruination of their lives was the wrong question for more than one reason. A more relevant question was posed by Amy Davidson at the New Yorker: “Where is the challenge to the idea that their lives really are ‘over’? ... Does it destroy a teen-ager’s life to take him off the path of being an adult rapist?”

Henry Rollins came out of the woodwork to muse about the efficacy and values of the criminal justice system: “I wondered if the years in the facility will ‘help’ them. What, exactly does one ‘learn’ in one of these places?” Richmond was sentenced to one year in a juvenile detention facility, and Trent Mays to two, so Rollins asked, “At what point do you get ‘better,’ how many years in one of these places does that take?”

The answer, surprisingly enough, is that juvenile sex offenders often can and do get better. Rehabilitation, of course, is one of only three separate functions that intervening in sexual offenses serves, explains Mark Chaffin, professor of pediatrics at the University of Oklahoma College of Medicine and director of research at the Center on Child Abuse and Neglect. There is “community protection,” identifying predators and keeping those who might re-offend away from potential victims. There is “accountability,” which sends a message as to what is and isn’t acceptable in a community. And then there is rehabilitation, on which researchers are quite optimistic -- at least when it comes to juveniles.

“Twenty years ago people lumped juveniles and adults together, and had this idea that if a kid committed a sex offense, he was on this immovable trajectory that was going to head towards more and more sexual deviancy and a lifetime of predation,” says Letourneau. “But that just isn't the case.”

Whereas once it was “widely believed, including by my peers in my profession, that anyone who committed a sex offense, child or adult, probably couldn't be rehabilitated,” Letourneau said, “we've done a complete about-face. We absolutely recognize the benefits for treatment, particularly for juveniles because the evidence is so strong,” including three published randomized trials. Studies have shown a recidivism rate that is much lower, somewhere around 3-5 percent, than for adult sexual offenders.

“Most teenagers, and by most I mean 95 percent, don't reoffend sexually once they're caught,” says Letourneau. Being caught has an important deterrent effect.” That, she adds, is another reason why “it's important for victims to come forward, absolutely.”

Chaffin notes that the most common group committing sex offenses against minors are males between the ages of 13 and 16. “And then it drops down considerably. In other words, most of these kids don't go off to become adult sex offenders. You have a whole lot of adolescent males who commit sex crimes that don't commit a large number of them over time. Then you have this relatively small number of adult sex offenders that have huge numbers of sex crimes.” Distinguishing between the two groups can be difficult, but assuming that an adolescent offender will become a habitual one has not been borne out by the evidence.

That may also be why juvenile offenders are more straightforwardly rehabilitated: They’re more suggestible and influenced by external cues. By contrast, adults have a higher recidivism rate, perhaps because “adults have a much better sense of the fact the they are committing a crime in the first place, and they are better aware of the consequences, and still they make the decision to offend,” Letourneau says.

The low recidivism rate is one reason why many public defenders raise concerns about juvenile sex offenders being forced to register. In Ohio, in particular, the laws have been successfully challenged to mitigate the effects on minors, says Amy Borror, the legislative and media liaison for the office of the Ohio Public Defender, who has testified before Congress about juvenile sex offender registration. (Her office assigned an investigator to the Steubenville case at a defense attorney’s request, and may end up handling the boys’ appeals.)

“Where we are today with juvenile sex offender registration is that none of the kids in the juvenile justice system -- like the boys in Steubenville -- go on the Internet registry, which is what people think of as the sex offender registry,” Borror says. As 16- and 17-year-olds, Richmond and Mays are mandatory registrants, but after release the judge can decide to place them in one of three tiers, which range from 10 years of registration to a lifetime. The judge considers a range of factors, including the treatment they’ve gone through and the nature of their offense. While they won’t be publicly on the list, the boys will have to register with local sheriffs and keep them apprised of their movements, or risk a failure to register offense equivalent to their first underlying charge -- in the case of Steubenville, a felony of the first degree.

Public notification through sex offender registration wasn’t designed to be punitive, though they often function as such; it was designed for community protection. And, Chaffin points out, "It's not designed to rehabilitate -- if anything, it impairs it ... The problem is when you do it with juveniles, they're really not that dangerous as a group. It really has arguably little or no value as community protection.” That’s because, Chaffin says, “the motto is, juvenile sex offenders are not simply younger versions of adult sex offenders.”

Some of them may become the habitual offenders who commit the majority of sex offenses. “Many of them do have an adolescent onset,” Chaffin says. “You can think of it as, there's lots of situations where there are certain gateway behaviors that are illegal but in most cases don't progress onwards. Most deep-end heroin addicts began as early adolescent marijuana smokers but that doesn't mean that most early adolescent marijuana users will become deep-end heroin addicts.”

The fact that adolescent sex offenders who get treatment can go on to become functioning members of society also suggests something else: that it can be prevented. “We do a fair amount of victimization prevention, as a nation but we don't do much perpetration prevention,” says Chaffin. “If it's relatively straightforward to change the behavior after it's happened, it ought to be relatively straightforward to prevent it from happening in the first place. So that's a reason to be optimistic.”