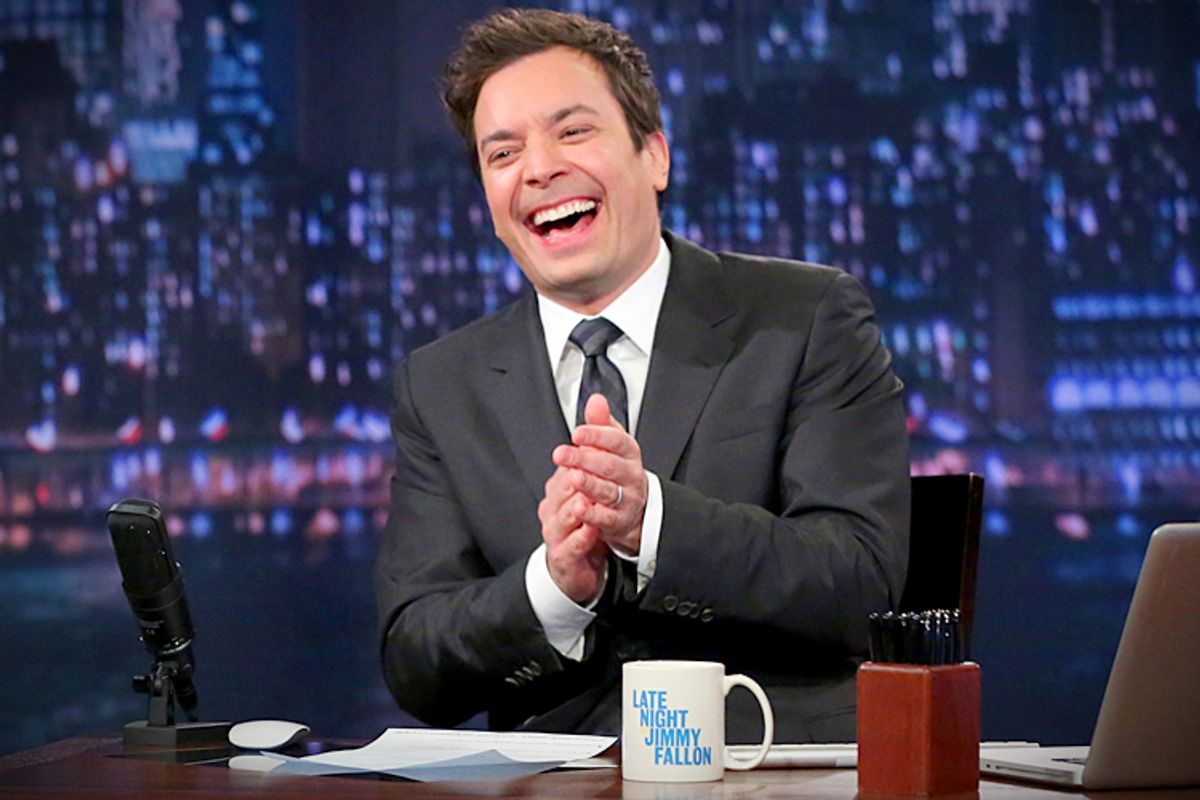 What a difference a few seasons makes. After a flurry of carefully placed leaks and scoops from inside sources, it appears NBC is preparing to anoint Jimmy Fallon the new host of "The Tonight Show" – and even move the show to its old home in the Big Apple.

It's been over three years now since NBC had its last very public and emotional meltdown over the throne of "The Tonight Show." Conan O'Brien had moved to Hollywood and assumed the helm for a brief, fateful seven months before a network-wide attack of tsuris that gave the world the gloating late night return of Jay Leno and the phrase "Team Coco." It was not the first time the Peacock had displayed its unwavering fixation on Leno as the One True successor to Carson – as anyone who's watched Letterman play the droll role of jilted lover over the past two decades knows. But the O'Brien affair seemed to solidify NBC's romance with Leno even further, planting him as firmly and permanently as host of "The Tonight Show" as a pope in the chair of St. Peter. And we all know how that turned out.

How could Fallon – the eager, puppyish former "SNL" star -- wind up on the cusp of assuming one of the most beloved and enduring television franchises of all time? Well, for starters, the 62 year-old Leno seems perfectly content now to abandon his once thriving home – and Leno traditionally gets what he wants when he wants it. The current "Tonight Show" host has been cheerfully ragging on his network's flagging status every night this week, comparing it in his Wednesday monologue to an extinct species. Last month, he declared "The Biggest Loser" not just the title of a show but the network's company motto, to the apparent displeasure of chairman Robert Greenblatt. For Leno to pack it in at the end of this season would be a fitting end to his tenure at the network, a "See ya, sucker!" end to a love affair that's been dysfunctional and largely one-sided from the start.

For another thing, Leno is entirely right about the state of NBC. Its primetime ratings have plummeted 16 percent since the start of the year. Last month's "Do No Harm" earned the distinction of becoming the lowest rated drama premiere in television history. "The Today Show," meanwhile, has been a hotbed of bad vibes, with even Matt Lauer admitting the network's sloppy handling of Ann Curry's exit last fall was "a disaster waiting to happen" and the subsequent fallout was "self-inflicted and perhaps deserved." The low-rated but much lauded "30 Rock" is no more, and "The Office" is winding down. "Up All Night" went this year from promising comedy with to-die-for cast to most actively fled debacle since Chatroulette. And then there's everything about the ongoing, slow motion car crash that is "Smash."  You can almost hear the executive flop sweat from here. To paraphrase fictional NBC muckety muck Jack Donaghy, I have a Google news alert for the phrase "NBC ridiculous disaster." So you can imagine how much ideological spaghetti the network must be throwing against the wall right now: "Monkey sitcom? Oh, wait, we already tried that. Something with Fallon? People still don't hate him, right?"

Which brings us to the final reason Fallon's ascension seems a fait accompli. He's eminently palatable. Younger and cooler than Leno, he can trot out The Roots and his "History of Rap." People under the age of 70 dig him. People still say "dig," right, NBC? Yet Fallon isn't some troublemaking whippersnapper. He's utterly unlike that weirdo Conan – no self-pleasuring bears for him. And it's hard to imagine him doing an entire show bound and gagged, like Kimmel did recently. He's a gracious interviewer. He inspires gentle chortles of "Oh look, he's doing Neil Young." He's all smooth surfaces and lulling bedtime-appropriate bits. Fallon. Sure. What the hell?

What NBC needs right now is some truly innovative thinking, a sign that it's willing to take risks and create what it used to refer to as "must-see TV." But for now, it can offer the promise of something safe and pleasant yet seemingly bright and young. There's no aura of epic disaster about him. Which makes Fallon, simply by default, far and away the best thing NBC has going for it right now.