My friend the Iraqi

Our absurd humor brought us close, and 10 years after the U.S. invaded his homeland, I watched him become a citizen 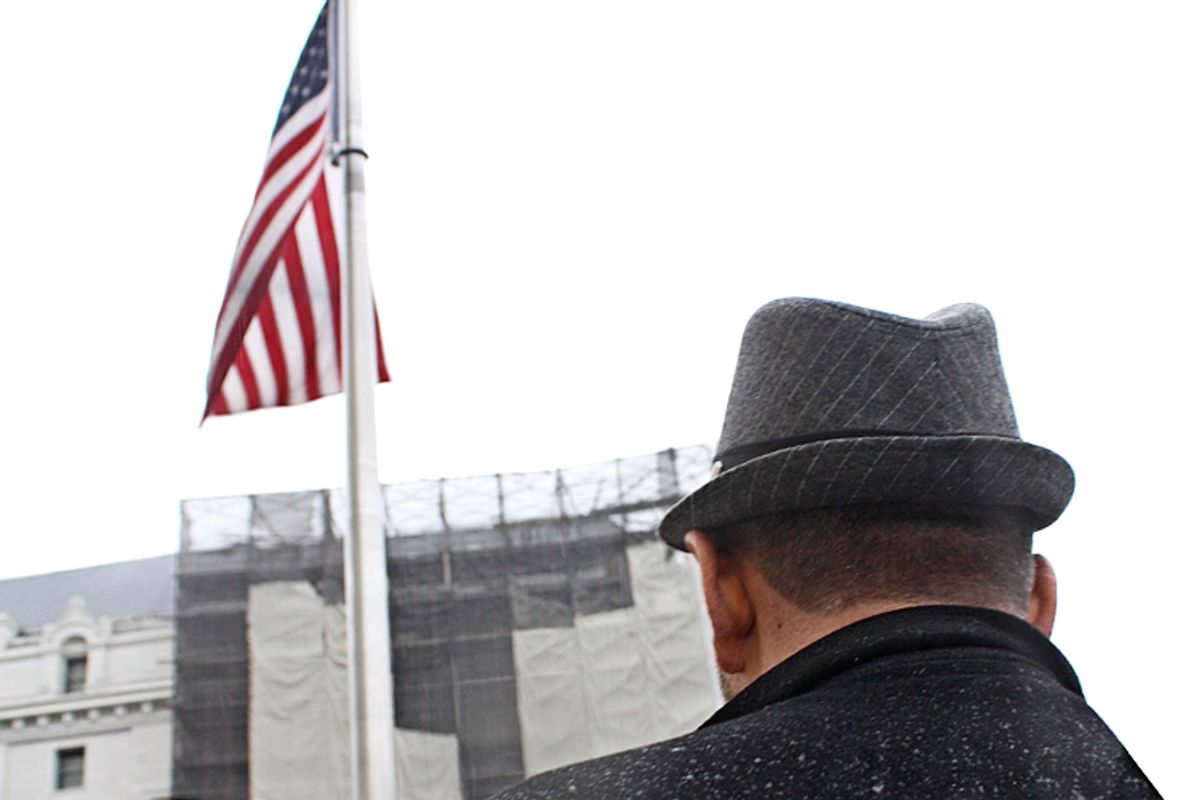 My friend and I meet early for breakfast, cappuccinos and chocolate croissants at a French bakery in downtown Brooklyn, N.Y. My friend – I’ll call him Abraham -- shows up in a dark suit and tie, an overcoat and a top hat, minus the prayer cap he sometimes wears.

“A little bit,” he says, as we walk through a rainy morning toward the courthouse.

On the way his father calls to check in, and to share news from home. Multiple bombings in Baghdad. More than 60 dead. “He’s on old man now, he deserves to live in peace.” Abraham sighs, and lights a cigarette as we cross busy Jay Street and turn the corner toward Cadman Plaza, heading toward the Theodore Roosevelt Federal Courthouse, a shiny new building a few blocks from the Brooklyn Bridge. “But just for this one morning I feel like acting like a selfish American. I don’t want to worry about it. I want to be happy.”

It’s Tuesday, March 19, 2013, 10 years to the day after the U.S. invaded Iraq and began an occupation that spawned a bloody civil war and led to one of the worst refugee crises in the Middle East in half a century. Abraham fled death threats in Baghdad to become one of those millions of refugees, and here he is today with a letter in his hand from the U.S. government confirming that he’s passed his citizenship test, and inviting him to take the oath of citizenship. And because I’ve never been to a swearing in ceremony before, and because over the years Abraham and I have developed a deep and quirky friendship that isn’t quite like any other I have in this town, here I am too.

At the courthouse we relinquish our phones and cameras at the door and pass through the metal detectors. Abraham is ushered into a packed courtroom, and I’m sent up to a crowded cafe on the floor above where other friends and relatives of soon to be naturalized Americans are sitting, waiting and watching a big-screen TV in the corner that functions as a sort of “Big Brother Courtroom,” broadcasting the proceedings downstairs in real time, which for quite some hours is also mostly people sitting, watching, waiting.

Then there’s Abraham up on the big screen, fidgeting and standing in line to pass in his old travel documents, and I feel this immense surge of feelings for the guy. For all he’s been through. For all this country has put him through, has put his family through, has put his country through. And for everything that’s been possible for him here, and what will continue to be possible for him here now. And I think, “Goddamn, he deserves this.” Goddamn, he’s an American now.

I met Abraham on a winter night about five years ago, in Astoria Queens. He’d been referred to me by a former USAID officer in Iraq who was now back in the States, who’d started an organization to track the exploding population of Iraqis who had fled the country, or were seeking to flee, because their work with the U.S. government or related companies or organizations put them at risk from the bewildering proliferation of armed groups and sectarian militias. I’d written a few articles on the topic and it was a story I wanted to keep on top of.

We ate dinner together that evening and he told me the basics; his move back to Baghdad from the Emirates after the invasion and Saddam’s ouster, hoping to take part in reconstruction. Landing a job as a translator with USAID, meeting Americans, seeing the Green Zone up close and personal. And things quickly going from bad to worse. Car bombs and shootouts, friends killed, the death threats. Then the escape: flying to Mumbai on forged documents, getting turned back and deported to Syria, then eventually to Cairo, where Abraham is arrested, tortured and imprisoned in an Egyptian jail, before finally getting registered with the U.N., and after months of living in limbo, flown to the U.S. on a refugee visa.

In many ways Abraham is one of the lucky ones. Before his first-term election, President Obama vowed massive support for Iraqi refugees, for the millions displaced throughout the region as a result of the war, and more specifically for those Iraqis who’d worked as translators, interpreters or support staff for the U.S. Army or U.S. contractors in Iraq. Now 15 months after full U.S. troop withdrawal and well into Obama’s second term, fewer than 20 percent of the special immigrant visas meant to assist these Iraqis have actually been granted, according to this recent McClatchy story, meaning that tens of thousands of Iraqis who worked directly for the U.S. remain shut out.

In New York Abraham’s first job is with the same NGO that helped him get to the States, listening to nightmare stories from displaced Iraqis around the world, and helping them try to navigate a byzantine American resettlement bureaucracy that seems structurally designed to keep as many of them out as possible.

“When Obama was reelected, I thought America was a country that corrects itself,” he tells me over dinner in the East Village a week or so before the swearing in ceremony. “But I’ve learned Americans don’t like sad stories, so I can see why they don’t want Iraqis around.”

Abraham shares a sage bit of advice he received from a fellow student at Columbia University a few years back, where he completed a masters in international human rights law. “At first I was honest when other students would ask me about Iraq -- that it’s a war, that it’s bloody, violent, no end in sight. But then this friend from India told me: ‘Don’t tell them the truth. Americans don’t want to hear sad stories. They’ll peg you as the negative guy.’ And I started to see this is true. I mean, nobody wants a friend who tells you how fat you are.”

Our friendship over the years has been punctuated by dinners like this. Good food, rambling conversation, and dark Iraqi humor. No topic is off-limits: swine flu, terrorism, suicide bombings. “An American once asked me if we have cars in Iraq,” he once tells me over dinner many years ago. “I told him of course we do. How do you think we make car bombs?”

My friend’s observations on American culture and politics, often couched in humor, are consistently spot on, especially his take on a particular kind of American know-it-all-ness that plays out just as much in casual relationships as it does in a media environment where talking heads pontificating about, say, Iraq are almost never, you know, Iraqi.

“The funny thing here is that people always try to teach me about Iraq. They say, ‘Saddam was a very bad man,’ in the same way my English teacher used to say, ‘Repeat after me, very bad.’ I feel like a lot of times I’m the entrée for many Americans, because I’m ‘the good guy’ who used to work with the U.S. government. People listen to me, then they interrupt me.”

There are plenty of reasons Abraham and I have become good friends, but one of them is definitely this shared comedic sense of the absurd. One night over Korean barbecue we hatched a plan for a “Candid Camera”-style series we wanted to launch, called, “Shariah: America, Are You Ready?” We would travel to Tennessee, where a number of towns had begun to pass strict anti-Sharia ordinances to stamp out the Muslim menace, and set ourselves up in a grocery store parking lot. Abraham would wear his prayer cap and grow out his beard, and I’d throw on a full body chador to pose as his subservient wife, but more important, to operate the hidden camera. We’d ask shoppers to sign a petition in support of a pro-Shariah ordinance and watch the sparks fly.

Like many of our late-night dinner schemes it never quite got off the ground, but our shared sense of the absurd is also sometimes not so funny. Two years ago, I worked with my friend on a letter to the editor to the New York Times, ultimately never published, about his feelings as an Iraqi refugee watching the uprisings of the Arab Spring from afar. Here’s a snippet:

This spring and summer we Iraqis watched with envy as our brothers and sisters in Tunisia, Egypt, Libya and now Syria had their moment in history. For generations to come those societies will have stories passed down from generation to generation, about the time when the people rose up against tyranny, and claimed their democracy. The stories us Iraqis will tell our children will be quite different. They will be about what happened when American tanks rolled into Baghdad, and about how in the ensuing years the country, already scarred and debilitated after decades under Saddam's rule, further splintered, shattered, and fell apart under a brutal occupation and the chaos that it unleashed. We Iraqis deserved a better story to pass down, but we were deprived of that right. We were deprived of our moment in history.

And yet here in America is where Abraham is choosing to make his home. And here is where he wants to bring his family so they can retire in a quiet place, so his dad can garden, so his mother can read, so they don't have to live through weekly bombings in their final years.

Abraham walks out of the courtroom with his citizenship certificate in hand, and two colleagues greet him at the courtroom door. They’ve come as a surprise. I snap a few photos and we walk out together -- they’ll be ushering him off to a “surprise” party at work that is no longer much of a surprise. Like many unexpected things about his new life in the U.S., he now works full-time at a big NGO dedicated to monitoring and fighting hate groups and hate speech, the only Muslim in an office full of New York Jews.

Which reminds me of something Abraham told me the other night, while reflecting on the road that led him to today. “It takes some real chutzpah, as we say here, for somebody to challenge me being here, as if I came here on a picnic and overstayed my visa. I’ve become American the hard way.”

Joseph Huff-Hannon is an award-winning writer and a Senior Campaigner with Avaaz.org, a global human rights and social justice campaigning network with 20+ million members. Joseph recommends that every American citizen, at least once in his or her lifetime, attend a naturalization ceremony.