The state of late-night ratings: Leno still leads, but there are cracks in his armor

Why is Leno being forced out at NBC? He's not exactly a hit among young viewers 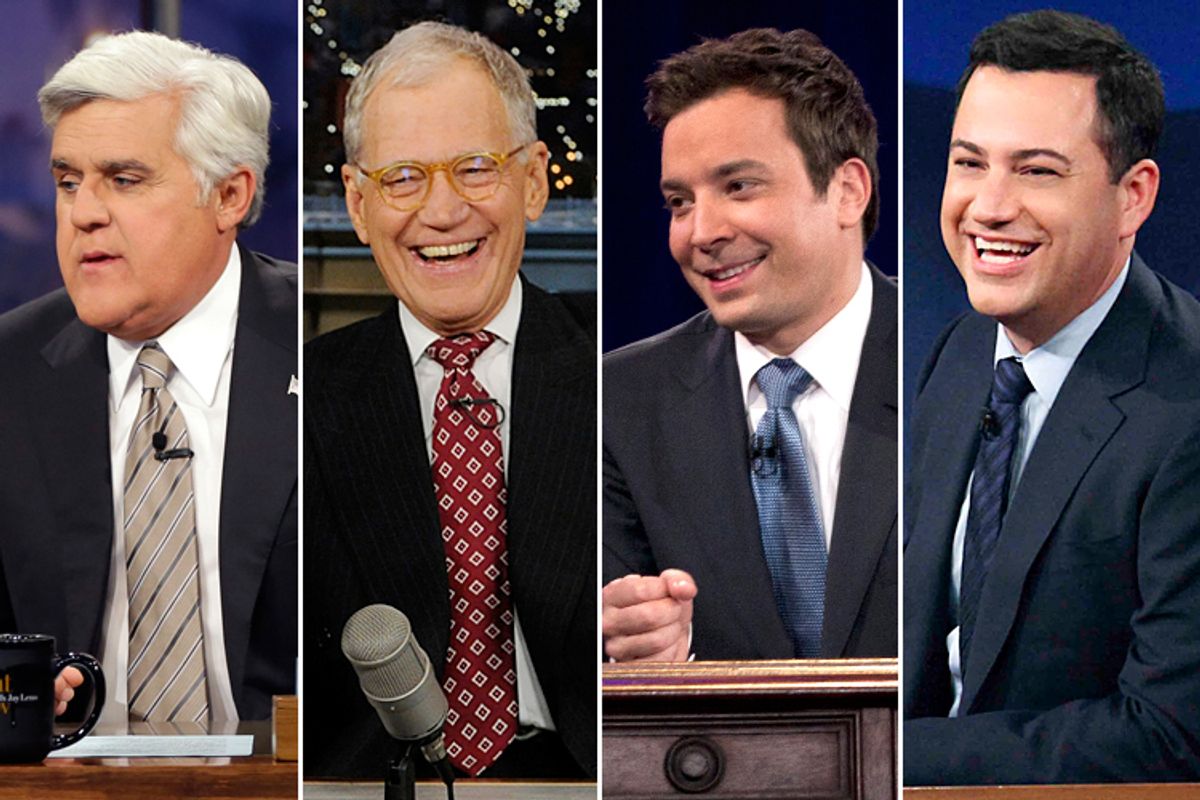 For a man who's reportedly about to be forced out of his job, Jay Leno's hardly bombing.

The host of NBC's "Tonight Show" continues to lead in the ratings: In the just-concluded February sweeps period, Leno led CBS's "Late Show" and ABC's "Jimmy Kimmel Live" among total viewers and viewers in the key 18-49 demographic.

The news for Leno isn't entirely good, though: The margin of victory in the most recent sweeps month (by which advertising rates are set) over longtime rival David Letterman in the key demographic was just 8 percent. And Leno's viewership, as is the case across the late-night dial, is disproportionately outside the young viewers advertisers court: With 1.003 million viewers out of 3.510 million under 50, only 29 percent or so of his viewers are actually in the age group to whom media buyers want to sell products. That's part of what BuzzFeed means when it describes Leno as not "cool" -- he's popular, but not among coastal elites, and also not among the sort of young viewers any network wants.

It's that statistic that may account for NBC's desire to move Leno to greener pastures -- as it tried once before, replacing Leno with the younger and hipper Conan O'Brien for a brief period; at 12:35 a.m., the presumed next "Tonight Show" host Jimmy Fallon got 1.663 million viewers in February, of whom about 39 percent are in the 18-49 sweet spot.

And Leno's ratings are dropping, too: Last year during February sweeps, 3.898 million viewers tuned in to "Tonight," and 1.156 million between 18-49. (In fairness, Dave's shedding viewers too -- and Jay marginally increased his lead in the past sweeps period -- and a half-hour "Nightline" got 1.4 million or so more viewers at 11:35 in February 2012 than an hour-long "Kimmel" did in February 2013.)

There are a few reasons for dropping numbers across the dial: Viewers are using the later hours for time-shifted programming earlier in the evening, for instance, and Leno's and Letterman's sensibilities are hardly the sort that draw new viewers. As pointed out elsewhere, bringing in a new host to "Tonight" may be a change that alters the dynamic negatively; Leno's fan base is firmly established, and Fallon's is just smaller and not as overwhelmingly young as one might expect. (After all, kids can watch the best clips the next day; it's older viewers who are in the habit of watching a full hour-long broadcast.)

Then again, the best ratings "Tonight" has enjoyed in years were on the occasion of Conan O'Brien's final show as host. Maybe all the drama will gin up interest for a while.