It's a dreaded but inevitable stage in every relationship: Admitting the basic fact of our human digestive tracts 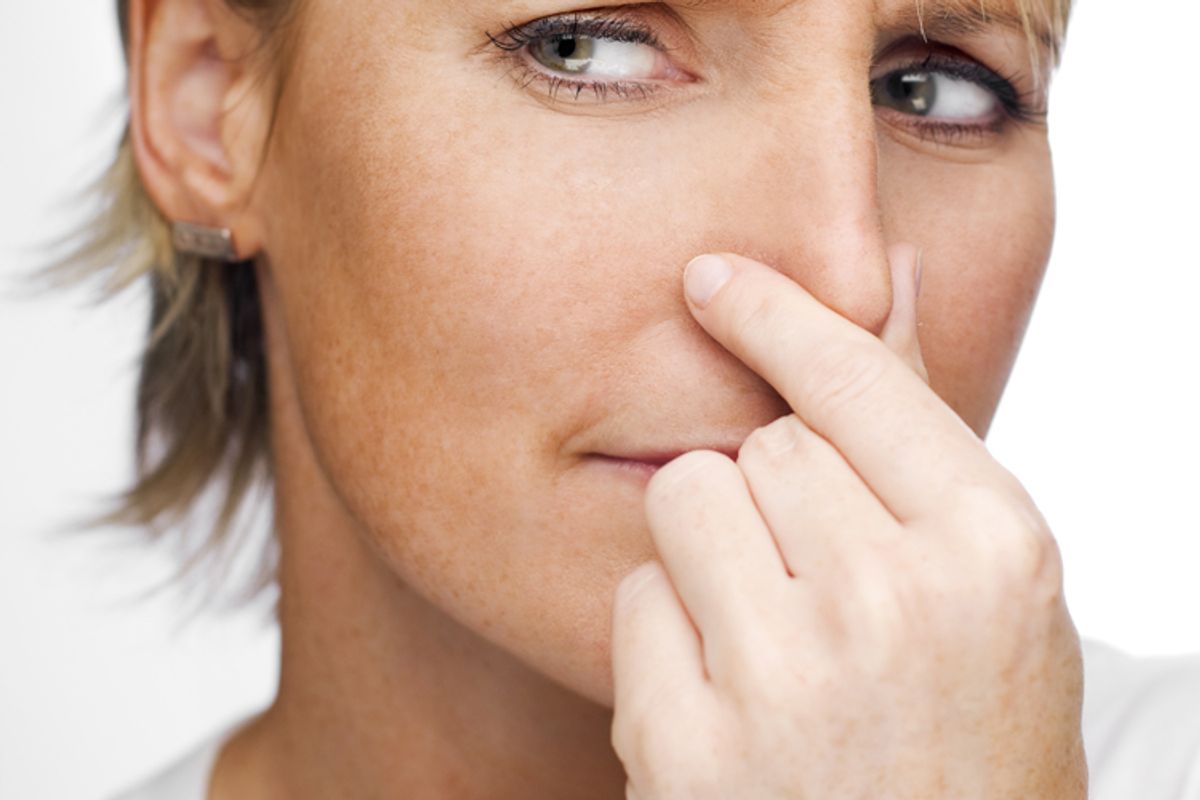 I placed headphones on my boyfriend's ears with a sheepish grin, picked the most beat-heavy tune I could find and cranked up the volume. Then I went into the bathroom of our rented Hawaiian cottage and yelled, “Babe! Baby! Can you hear me?” No response. But just for good measure, I turned on the shower. Then I sat down on the toilet and spent the next several minutes staring right at a framed note beseeching me to please conserve water.

There’s nothing like a vacation to bring a relationship to the next level. I’m not talking about novelty, shared adventure or lifelong memories -- although, yes, those things are important. I’m talking about flatulence, y’all. From that point on during the rest of our stay in those tight quarters, we developed a code: “I’m gonna go take a fake shower now,” he would tell me. Or I would ask with a knowing look, “Could you go somewhere far, far away?” The subtext always being: Noises are going to come out of my butt, and I don’t want you to hear them.

We had managed to admit to each other the fact of our human digestive tracts, and there was no going back -- not even when we returned home to our separate apartments and bathrooms. He quickly adjusted to this free world of farting, but I still clung to gasless -- or at least noiseless -- feminine illusion: “Plug your ears,” I told him, holding my bloated stomach. “Tight!” He humored me by twisting his hands to put his thumbs in his ears while his forefingers pinched his nose closed. I've taken the same slow, tortured path in every relationship of mine: Total fart denial, enforced ear-plugging and then -- boom -- Windy City. They're like Freudian stages of development that I've had to go through anew with each boyfriend.

I'm far from alone in this, thankfully. In a wickedly funny scene in "Love and Other Disasters," a therapist tells her patient that "relationships are best measured by farting." She describes several stages: Stage one "is the conspiracy of silence," she explains. "This is a fantasy period where both parties pretend that they have no bodily waste." Much further along there is "the fart honeymoon, where both parties find each other’s gas just the cutest thing in the world." But, as she warns, "no honeymoon can last forever," and soon comes "the critical fork in the fart": "either the fart loses its power to amuse and embarrass, thereby signifying true love, or else it begins to annoy and disgust, thereby signifying everything that is blocked and rancid in the formerly beloved."

Of course, that isn't a true psychiatric evaluation of the importance of flatulence in relationships, but it certainly rings true. On the most basic level, we refrain from farting around loved ones because we're sensitive little buggers worried about rejection. That fear was substantiated in my friend "Sally's" past relationship, in which her live-in boyfriend told her that she "farted too much and it grossed him out." All we really want is to be loved for our flaws, and our farts -- but fearing we won't be, we come up with absurd solutions like "fake showers" or the very real odor-eliminating Better Marriage Blanket.

You had an arse full of farts that night, darling, and I fucked them out of you, big fat fellows, long windy ones, quick little merry cracks and a lot of tiny little naughty farties ending in a long gush from your hole. It is wonderful to fuck a farting woman when every fuck drives one out of her.

He added, "I hope Nora will let off no end of her farts in my face so that I may know their smell also" and signed off with, "Goodnight, my little farting Nora." Aw, kind of!

I put out a call on Twitter that read, "Let's talk about farting. In relationships. Thoughts, feelings, trauma? Talk to me. #importantworldnews." In response, Aaron Green, a 32-year-old newlywed told me he hasn't farted in front of his wife of two months and he plans to maintain the ruse "as long as possible!" (Exclamation point his.) He explained, "It's akin to staying in shape. I don't want to gain 50 lbs. & get complacent, either. I want her to be turned on by me." Green says he dreads the idea of his wife one day looking at him and thinking, "Oh boy, the paunchy fart machine wants to bone." Another Twitter follower told me, "Married 10 yrs and have never intentionally farted in front of her. It's hard enough to get a BJ, farting wouldn't help." Another man opined that farting is "the second big hurdle in a relationship," right after "I love you."

My 34-year-old friend Page tells me that she's of two minds on farting in her marriage. Part of her feels "that farting is natural, inevitable and no big deal," but another part of her wants "to be even more polite about farts with my chosen monogamous sexual partner than I am with the general populace, in deference to the fact that we are trying to be monogamous sexual partners as long as we both shall live." Of course, that doesn't mean that her "body and its functions are shrouded in some feminine mystery," she says, as her husband watched her give birth, and they've "commiserated over various intestinal miseries when traveling in southeast Asia and Africa." But she tries to be discreet when possible.

Not all gas-denying is motivated by decorum. Hayley Krischer, a 42-year-old writer from New Jersey, told me, "My husband finds it too funny, which is part of the problem." If she dares let one rip, he and her kids call her "Farticus," which she describes as "hilarious and annoying all at once." Her husband, by the way, is not so shy himself -- in fact, he's quite fond of the ol' "pull my finger trick." She refrains because it's all "too reminiscent of my childhood," she says. In a tweet she explained that "when you [grow up with] a brother, you are scarred for life by farts" and followed up with the hashtag "#dutchoven." Say no more.

I was delighted to find that, contrary to expectations, many of the confident farters that I heard from were women. Kate Harding, formerly of Salon's Broadsheet (R.I.P.), told me of her husband: "I knew he was the one because I had no angst about farting in front of him. I try not to abuse the privilege, though." She elaborated, "I agonized so much about it with guys when I was younger. Not worrying about it made me realize how secure I felt with him." The brilliantly funny Beth Lisick told me in a tweet, "After 15 years, our only real rule is that you can't NOT comment on someone's fart." She added, "If I ever farted and my husband said NOTHING, I would know we were doomed." I begged for details on this post-fart commentary and she offered, "Laughter, disgust, a stab at description ('whoa that sounded like you were opening a cartoon pirate chest')." Another favorite of hers: "That sounded like it came from the '80s."

In my case, I've already belched in front of my boyfriend and become spectacularly lazy about shaving my legs. Farting, without forcing him to plug his ears, is the final frontier. One day soon, I will begin conserving water by ending all the "fake showers." I'll save my intestines some unnecessary agony and, if we can summon anything close to the wit of Lisick and her husband, bring some levity to our relationship. But as the tweeter said above, it's a lot like saying "I love you" -- and I guess I'm waiting for the perfect moment to show him just how much.