Is the two-state solution finally dead? 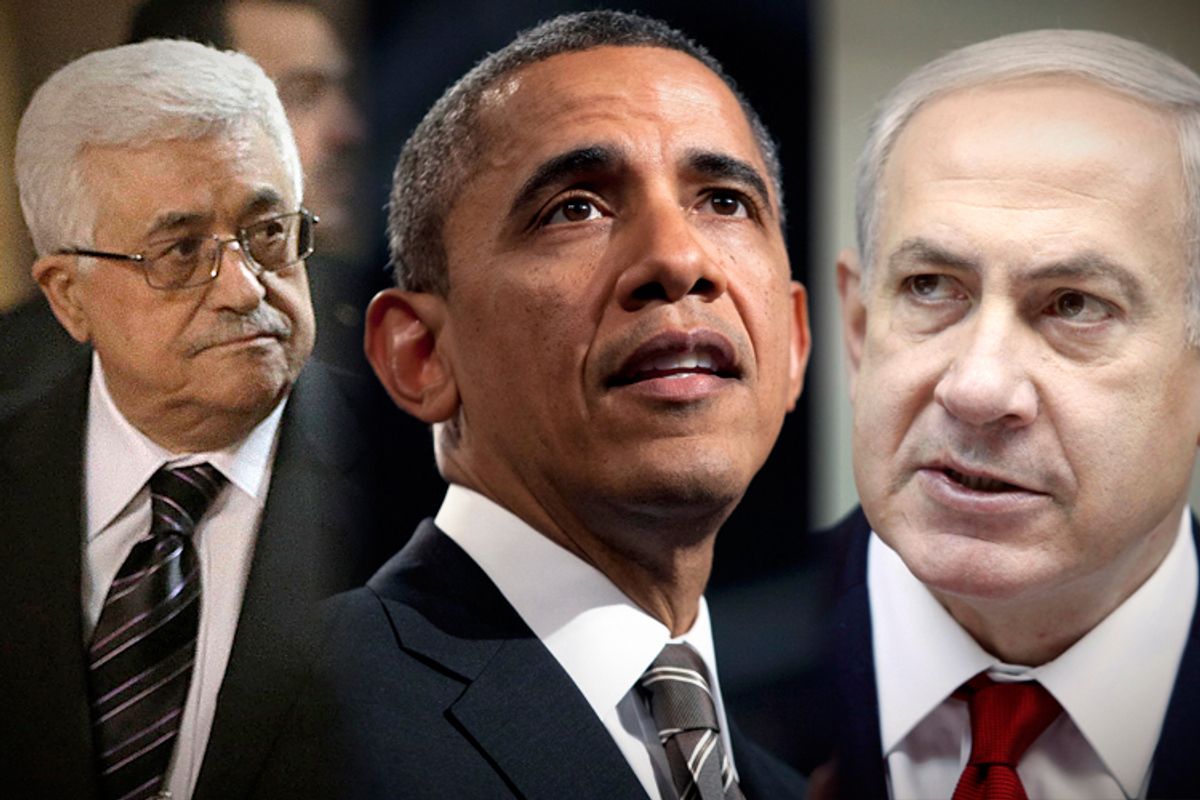 Let’s give Mitt Romney some credit for candor on the Middle East, if for almost nothing else. President Obama’s soaring rhetoric in his campaign-style speech this week in Jerusalem, when he urged the Israeli public to “create the change that you want to see” and laid out a moral and philosophical case for a two-state solution to the Israeli-Palestinian problem, showed us the leader of the free world at the top of his oratorical game. But Obama didn’t go to Israel with any concrete plan to restart negotiations between Israeli Prime Minister Benjamin Netanyahu and Palestinian Authority president Mahmoud Abbas, a pair of weakened politicians who lack clear mandates from their own people. Despite vague promises to send Secretary of State John Kerry into the breach in coming weeks, it’s by no means clear that he has one.

In contrast, Romney’s infamous private summary of his Middle East policy – “we kick the ball down the field and hope that, ultimately, somehow, something will happen and resolve it” (he never used the phrase “kick the can down the road,” although that’s how it has entered the popular discourse) – has the unmistakable tang of realpolitik rather than wishful thinking. Given the long history of failure by all sides in this arena, it’s not even cynical to suggest that this is precisely Obama’s strategy: Try to soften attitudes on the ground a little, win over a few hearts and minds on both sides, and then gratefully hand over the problem to another hopelessly conflicted president in 2017.

What we can also detect in Romney’s remark and, a little deeper below the surface, in Obama’s Jerusalem speech is the growing sense in many quarters that the two-state solution is dead – that it’s no longer practical or possible to establish an independent Palestinian nation alongside the Jewish state of Israel, if it ever was. While the “one-state solution,” however conceived, remains a semi-forbidden zone in mainstream international policy discourse, it keeps cropping up all over the place on both the right and the left. Within a few weeks last summer, leading Israeli settler activist Dani Dayan published an Op-Ed in the New York Times urging the international community to give up “its vain attempts to attain the unattainable two-state solution,” while radical journalists Antony Loewenstein and Ahmed Moor published an anthology of writing by academics and activists entitled “After Zionism: One State for Israel and Palestine.”

Less than a month later came the English translation of eminent Israeli sociologist Yehouda Shenhav’s explosive essay, “Beyond the Two-State Solution,” which imagines a bi-national, bilingual federal democracy of Jews and Arabs that would encompass the entire territory of present-day Israel, Gaza and the West Bank. Shenhav, Dayan, Loewenstein, Moor and the leadership of Israel’s staunch enemies Hamas and Hezbollah might agree about nothing else, including which day follows Tuesday and whether the sky is blue. But they’d all agree that a negotiated two-state solution won’t work. Indeed, Israeli film director Dror Moreh, who made the Oscar-nominated documentary “The Gatekeepers” and falls somewhere toward the pragmatic center of Israeli politics, recently told me the same thing. He sounded rueful about holding that opinion and thinks it’s still worth trying but suspects it’s simply too late.

Obama’s Jerusalem speech was aimed squarely at people like Moreh, who still support a peace deal but are inclined to believe it’s impossible. In a larger sense, the president was also trying to provide a boost to the fading momentum of the two-state cause. He spoke directly to the Israeli people, rather than to a divided Knesset dominated by Netanyahu’s hard-line coalition, precisely because a “one-state solution” (or, more properly, an enhanced version of the current one-state reality) has become the de facto position of the Israeli government. It’s difficult to find much distance between Netanyahu’s actual policies and Dani Dayan’s argument that “no final-status solution is imminent” and therefore all parties should focus on “intense efforts to improve and maintain the current reality on the ground.” Netanyahu’s version of kicking the can down the road works like this: We occasionally pay lip service to the idea of a negotiated settlement, at some distant future date when the Palestinians have essentially capitulated to Israel’s demands in advance, while continuing to build settlements that carve the territory of any hypothetical Palestinian state into Swiss cheese.

Obama’s reference to “those who are not simply skeptical about peace, but question its underlying premise” presumably alluded both to the Netanyahu government and to the anxiety of Israeli public opinion, battered by years of terrorist attacks and international isolation. But on a larger scale he was also trying to combat the paradoxical attitudes found on both sides that have fueled the one-state ideas. Public-opinion surveys have consistently found that most Israelis and Palestinians favor peace talks, but a large majority of Israelis do not believe that a Palestinian state will bring peace, while a great many Palestinians seem to view such a state as a half-measure along the road toward the replacement or annihilation of Israel.

Given this landscape of mutual incomprehension, where even discussing issues like the status of Jerusalem or the right of return of Palestinian refugees has proven impossible, is it time for Obama and other world leaders to move past the two-state solution, in Yehouda Shenhav's phrase? Rolling Israel’s borders back to the status quo ante of 1967 seems like a bizarre and impractical project in the first place, and as Ahmed Moor puts it, “the unacknowledged truth is that Palestine/Israel is already one country.” Roughly one-fifth of the people living inside Israel’s current borders are Arabs, and the Jewish population of the West Bank will likely soon reach or exceed that level. Extricating the two entities from each other after all this time will be something like separating conjoined twins who’ve grown most of the way to adulthood.

Well, it’s an intriguing thought experiment, anyway. I think the answer to the question is "kind of," in the sense that while most one-state options are either unappetizing or unrealistic, a two-state solution simply isn't going to happen, certainly not soon and likely not ever, and the world had better face that fact. To take the most obvious objection first, almost everyone who proposes a one-state solution has something wildly different in view. The Hamas vision of Israel’s destruction is obviously not compatible with the settler vision of an ever-expanding Super Israel where Palestinians live in conditions of Jim Crow dependency. Whether nightmarish or utopian, no proposal currently in view looks like an acceptable Plan B for the power brokers of the international community. It would be nice to believe that in the long arc of history something like the multicultural federal republic of Israel-Palestine envisioned by Shenhav and others will emerge, years after everyone now involved is dead and the ethnic and religious passions have faded. But it's no good pretending that's a plausible near-term option. Such ideas have long found a constituency among progressives and intellectuals all over the world, but they have almost no real-world support among Palestinians and are viewed by most Israelis as a threat to their nation’s core identity.

Obama played his part superbly this week, but the president surely grasps the nature of the trap he faces. Working for peace in the Middle East isn’t even a poisoned chalice, since that implies there’s something attractive about it at first glance. It’s more like a poisoned cup of poison, marked with a skull-and-crossbones and served over broken glass. Like every American leader since at least Dwight Eisenhower, Obama is locked into a historic commitment to Israel’s status as the post-Holocaust Jewish homeland and into a land-for-peace formula that will supposedly, one day, lead Israel’s Arab neighbors (and onetime Arab residents) to accept its existence. Arguably that was never likely, and these days Israel's Jewish identity and the possibility of peace seem to be in direct conflict. With a two-state solution fading toward invisibility, what Palestinian political scientist Khalil Shikaki chillingly describes as “an ugly one-state dynamic” with “no happy ending” in view for either side – the Dayan-Netanyahu plan, in effect -- is gradually being enforced on all parties. At the very least, we should see it for what it is.