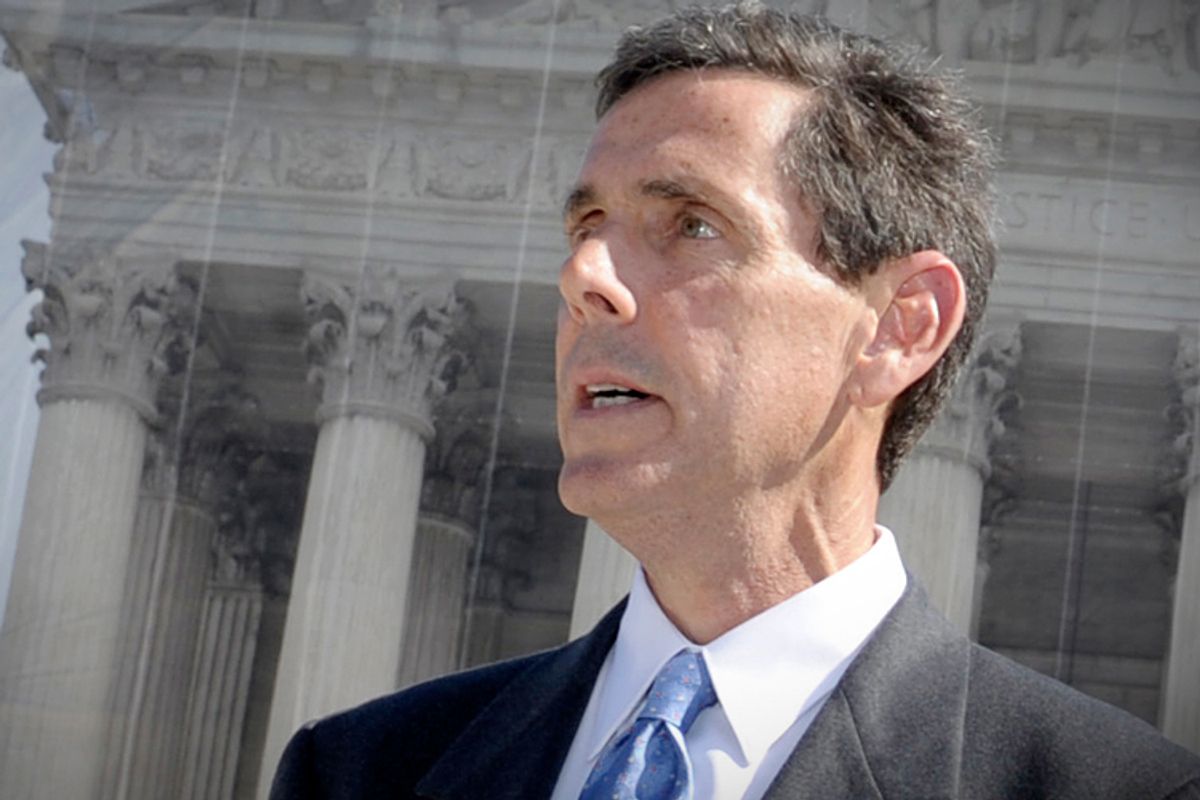 At least that’s the lesson of Edward Blum, a conservative legal activist who, despite lacking formal legal education, has successfully pushed 14 cases to the nation’s highest court. Of the nearly 9,000 cased filed with the court last year, just 79 got oral arguments. Blum got two of them, and they’re both among the most-watched cases currently before the justices.

One, Shelby County v. Holder, could gut the 1965 Voting Rights Act. The other, Fisher v. University of Texas, could outlaw affirmative action in college admissions and possibly elsewhere. Progressive legal activists and civil rights groups have sounded the alarm, putting both cases at the top of their agendas and warning that a bad decision could undermine decades of protections for minorities.

If you see a pattern between the two cases, it’s because there is one. Since a failed 1992 Congressional bid in a heavily gerrymandered majority-minority district in Houston, Blum has been obsessed with race and public policy, seeking to tear down what he sees as special treatment for subgroups wherever they exist in the law. When lobbying elected officials didn’t work, Blum turned to the courts, despite not having a law degree.

“He’s one of a number of conservative legal entrepreneurs who are using the courts to push for reforms that they can’t get through the legislature,” Adam Winkler, a constitutional law professor at UCLA, told Salon.

In interviews, Blum is meek, describing himself as a “regular guy.” He runs a group called the Project on Fair Representation, but it’s basically just him -- there’s no office, he’s the only employee and the phone number listed on the website is his cell phone. He describes his role as merely that of a “yenta,” finding suitable plaintiffs to challenged targeted laws and then matching them up with powerhouse lawyers to actually argue the cases.

But with two important cases before the court, he’s suddenly received outsized notice. “I wouldn’t call all this attention fun, but it’s sort of unsurprising,” he told Salon in an interview.

Until very recently, he didn’t even draw a salary. But as the work become more demanding, Blum said he started taking a “modest” honorarium. “It’s on par with what a starting high school teacher would make in a city like Phoenix of Kansas City,” he explained. The former stockbroker still has a day job, now reduced to part time, doing quantitative risk analysis for public finance.

Despite the success, Blum has no interest in scaling up his operation or moving into new areas of the law. “I’m a one-trick pony,” he told Salon. “I don’t think it’s wise for me to put on another hat and start looking at other areas of the law ... they’re just not my expertise.”

Ironically, Blum’s model of finding plaintiffs in the hopes of getting precedent-setting court decisions has its roots in his polar opposite: The NAACP Legal Defense Fund. Beginning in the 1930s, the African-American legal group used that very tactic to push landmark civil rights reforms that would have gone nowhere in Southern statehouses, with cases like Broad v. Board of Education and Murray v. Pearson.

Blum is doing almost exactly same thing, but with antithetical goals. Indeed, he and the NAACP LDF are squaring off in the Fisher case, with the storied civil rights organization filing an amicus brief to defend UT from Blum’s client, Abigail Fisher.

But today, thanks to a host of technological, legal and societal changes, you no longer need a big, well-funded organization like the NAACP LDF to have big impact. “The process has broken down. Or, to put it another way, the process has become democratized,” said UCLA’s Winkler.

“We’re in a new era of civil rights litigation. Now, anyone -- anyone -- can be an entrepreneurial lawyer and bring a cause of action and force into the courts major questions of legal change,” Winkler said. Often, he added, these legal entrepreneurs are willing to take risks that larger organizations are not. No one is a better example of that than Blum.

But Blum is not alone on the right. For instance, there’s Jim Bopp, the RNC committeeman who has single-handedly rolled back decades worth of campaign-finance laws. “He filed cases that everyone else in the business thought were completely crazy, but with his victory in Citizens United, he’s the one who’s laughing now,” Winkler said.

But Blum is unique in his unlikely, one-man operation. And nobody even remotely like him exists on the left, experts of all stripes agree. “I don’t know any one of my opponents who are doing this,” Blum told me.

For their part, some liberals say Blum’s success is a bit overblown.

“It’s easy to exaggerate the significance of Blum,” Ian Millhiser, a constitutional lawyer and legal blogger at the Center for American Progress, told Salon.

Millhiser pointed out that Blum didn’t exactly find ideal plaintiffs in either case before the court today. In the affirmative action case, the argument is that Abigail Fisher was unfairly denied admission to UT Austin because the school gives favorable treatment to minorities.

But Fisher was hardly an outstanding student, and university officials say she would have been rejected even if she received points for being a racial minority. An investigation by ProPublica lends credence to that assertion, showing that her SAT scores were well below the school’s mean and that her GPA was merely average. And while the school did offer provisional admission to students with lower scores than hers, just five of those students were black or Latino -- 42 were white.

In the voting-rights case, the argument is that the Voting Rights Act is no longer necessary because widespread racial discrimination is no longer a major problem. But Blum’s plaintiff, Shelby County, Ala., has had plenty of problems with voting discrimination.

“Think about this state that you're representing,” liberal Justice Elena Kagan said during oral arguments. “It's about a quarter black, but Alabama has no black statewide elected officials. If Congress were to write a formula that looked to the number of successful Section 2 [of the Voting Rights Act] suits per million residents, Alabama would be the number one state on the list.”

“The main thing he does,” Millhiser said, “Is be a ‘yenta’ for conservative litigation, picking the good plaintiffs. But in both of his most high-profile cases, these are not the best plaintiffs that you could have found.”

Peter Laumann, a fellow at the Alliance for Justice, a coalition organization for over 100 progressive legal advocacy groups, agrees, arguing that much of Blum’s success comes from the increasingly rightward shift of the courts.

"Ed Blum has been effective because there's been 30 or 40 years of rejiggering the Supreme Court,” he told Salon. “Any Ed Blum could bring that case."

Indeed, the Supreme Court has become undeniably more conservative and corporate friendly over the years, giving conservative legal entrepreneurs like Blum a big leg up.

Laumann also took issue with Blum’s image as a lone wolf. “He’s really part of this huge web of conservative groups. The bulk of his money comes from a group called Donors Trust, which is a basically a clearing house that funds front groups to push a whole bunch of right-wing policy goals, from tort reform to climate change denial to school choice to voter rights challenges.”

Indeed, Donors Trust provides the legal fees Blum pays to lawyers who take up his cases -- “millions” over the years. The organization is sort of like the United Way of conservative political philanthropy in that big donors can funnel money to the group, which then distributes it to friendly organizations.

On its website, the group says it is “explicitly devoted to supporting organizations that promote liberty” and calls itself “an innovative charitable vehicle for donors who wish to safeguard their charitable intent to fund organizations that undergird America's founding principles.” Liberals have called it a “an anonymous tax-deductible policy slush fund” that’s “almost a laundering operation” for wealthy donors.

In any case, Blum may not be needing the money for much longer, as he sees a definite endpoint for his work.

“Frankly, with this litigation -- challenging the use of race or ethnicity in public policy -- at some point you realize that you may not do more in the courts. The courts will let you go to some spot, and then that’s as far as you can go,” he said.

He doesn’t know what that endgame will look like, but he knows we’re not there yet. “Look, I have no idea what the Fisher opinion is going to be. Nor the Shelby County decision. Maybe there will be an invitation to continue from the courts, maybe there will be an opinion that leads everyone to believe that this is as far as the court will go with this issue.”

It sounds like you’re trying to work yourself out of a job, I noted. “That’s the goal, exactly. I want to take things as far as the current court will allow.”