GOP is using the liberal justice's words to justify its anti-LGBT agenda. Here are two reasons they have it wrong 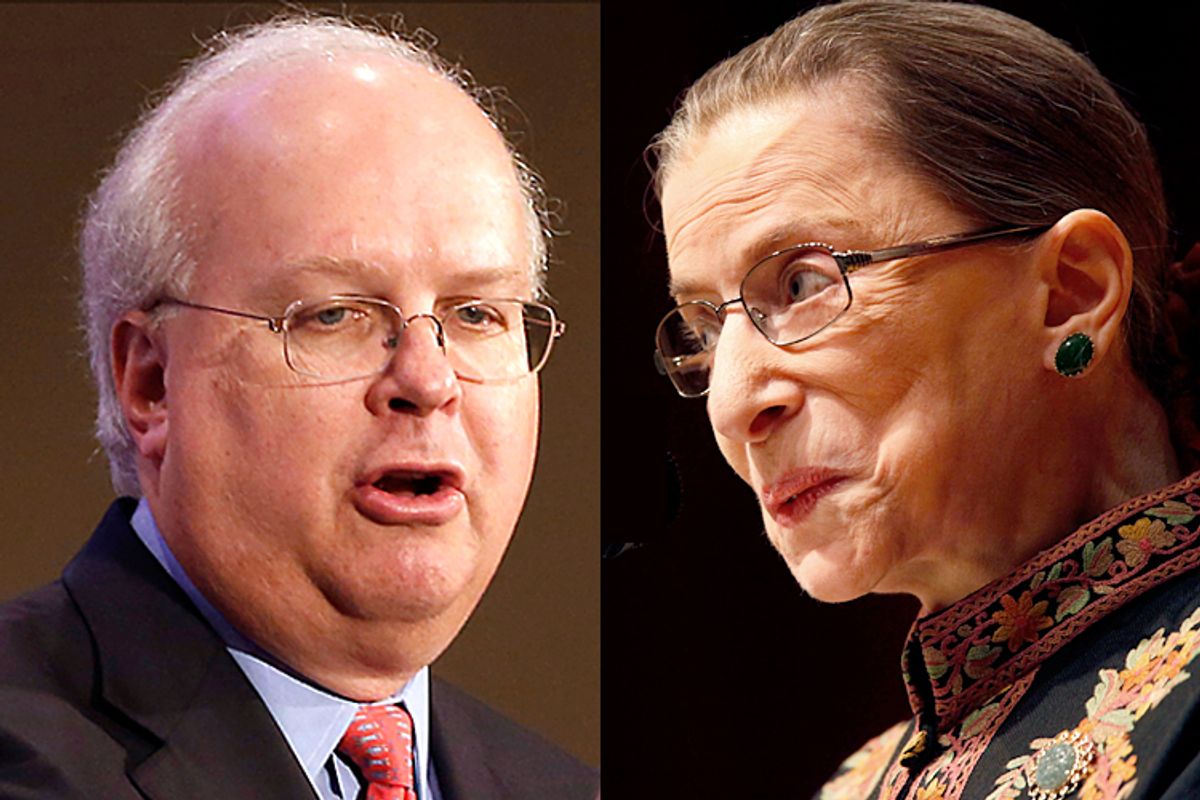 Conservatives may have fallen out of love with Chief Justice John Roberts, but they’ve also found an unlikely new hero: the Supreme Court’s most liberal justice, Ruth Bader Ginsburg. That is, at least as far as they believe she provides cover for their argument against the Court recognizing marriage equality.

There were Karl Rove and Peggy Noonan on "This Week" on Sunday, gleefully seizing on Ginsburg’s prior statements about Roe to make an argument against Supreme Court recognition of minority rights in general. “Americans don't take it well and don't accept it as a resolution when their black-robed masters in Washington decide to put on them what they decide is the right thing,” said Noonan. “One of the great sins of Roe versus Wade, the abortion decision of 40 years ago, was that it decided everyone has to do it one way, instead of leaving it to the states. May I note, by the way, Ruth Bader Ginsburg, a famous court liberal, her acknowledging very recently was in I think the Times today, that the Rove versus Wade decision, the abortion decision, had gone too far and was an overreach. That is an epic statement from an American liberal left jurist.”

Rove chimed in too. “I'm interested in Justice Ruth Bader Ginsburg,” he said. “She has had comments in the past about Roe v. Wade, which Peggy mentioned.” Host George Stephanopoulos supplied the answer: “Went too far, too fast.” Said Noonan, “We overdid, yes.”

Rove and Noonan aren’t alone. As is pointed out in the Times piece this weekend that Noonan was referring to (which included only past statements from Ginsburg), “Briefs from opponents of same-sex marriage, including one from 17 states, are studded with references to the aftermath of the abortion decision and to Justice Ginsburg’s critiques of it.” Even District Court Judge Vaughn Walker, who in the oral arguments on California’s Proposition 8 asked Ted Olson, the counsel opposing it, “Isn’t the danger not that you are going to lose this case, either here or at the Court of Appeals or at the Supreme Court, but that you might win it?”

Justice Ginsburg did say of Roe at Columbia Law School last year (at a forum I attended), “It’s not that the judgment was wrong, but it moved too far, too fast.” But there are two reasons to be skeptical of the sudden right-wing romance with Ginsburg: One, they’re conveniently distorting her position, and two, lots of legal experts plainly disagree with her.

What Ginsburg said (at Columbia, and in several other places) was that she wanted the court to eventually rule that abortion bans discriminated against women and inhibited gender equality -- not exactly Rove and Noonan territory. Crucially, she also wasn’t saying that all such divisive issues should be left, uncontested, to state legislatures, as Noonan implied.

“Justice Ginsburg was not saying the Court should have stayed out of the abortion issue. She was saying the Court should have invalidated the abortion ban that was in front of it in Roe, without writing such a broad opinion,” says Samuel Bagenstos, a professor of law at the University of Michigan (and a former Ginsburg clerk). “The precise equivalent of that course of action in the marriage cases would be for the Court to invalidate DOMA and Prop 8. I don't think anyone would doubt that would be a big progressive victory.”

But several experts have for years been carefully pushing back at Ginsburg’s contention that Roe’s sweeping nature created a political backlash and movement that would not have otherwise been there, including longtime Supreme Court observer Linda Greenhouse and legal scholar Reva Siegel. (Disclosure: I’m a visiting fellow at the Program for the Study of Reproductive Justice at Yale Law School, where both Greenhouse and Siegel teach.) They have argued that social movements were already trying to mobilize against abortion, even as public support for its legalization was high (and remains so). Political progress had slowed, and some states would never have legalized abortion or relaxed their bans. The issue became a national, politically polarizing linchpin, they point out, only after Pat Buchanan advised Richard Nixon to use it to peel off some Catholic voters from Democrats.

And political scientist Scott Lemieux, who has written extensively on the topic, writes today, “The specific, oft-cited argument made by Ginsburg is, I think, wrong in two crucial respects. First of all, Ginsburg’s argument that the decision would have been more broadly accepted had it rested on equal protection grounds is almost certainly wrong. The public evaluates decisions based on results, not reasoning, and essentially nobody without a professional obligation to do so reads Supreme Court opinions.” In other words, the average person doesn’t have a good understanding of why Roe was decided how it was and what it meant -- they just absorb the message that some “black-robed masters” said everyone should be allowed to kill babies. “Second,” writes Lemieux, “I don’t understand the argument that a ‘minimalist’ opinion just striking down the Texas law wouldn’t have generated a backlash.”

That gets to why all this matters: The presumption that this is about strategy causing backlash, rather than the fact that contested rights are going to inevitably be controversial, whether the courts are involved or not. “There was, is, and will be conflict over abortion, same-sex marriage, and indeed, the very meaning of equality,” write Siegel and Greenhouse. Marriage equality may ultimately be less politically threatening for inherent reasons I’ve written about, but the point is that courts recognize rights even when they’re politically unpopular, and the implicit argument that courts should stay out of such issues altogether is an opportunistic and selective one.

After all, the states' rights argument is another way of saying that rights should be put to a ballot, but with the hope that everywhere possible, the answer will be no.The chairman of the National Organization for Marriage told the Times, “The lesson [the Justices] should draw is that when you are moving beyond the clear command of the Constitution, you should be very hesitant about shutting down a political debate.” When it comes to abortion, even with the nominal protections of Roe but with the grim blessings of Planned Parenthood v. Casey, that “political debate” has resulted in a patchwork of laws in which women in New York apparently have more constitutional rights than women in Mississippi, who in turn would be even worse off without Roe.

The message LGBT rights activists are meant to draw from all this talk of backlash is, as Greenhouse and Siegel paraphrase it, “Watch out! Don’t go there! Look what happened 40 years ago when the Supreme Court granted women the right to abortion.” In other words, wait your turn -- a turn that for some, might never otherwise come.