The agency has since apologized, saying, "A video of this type would not be made today" 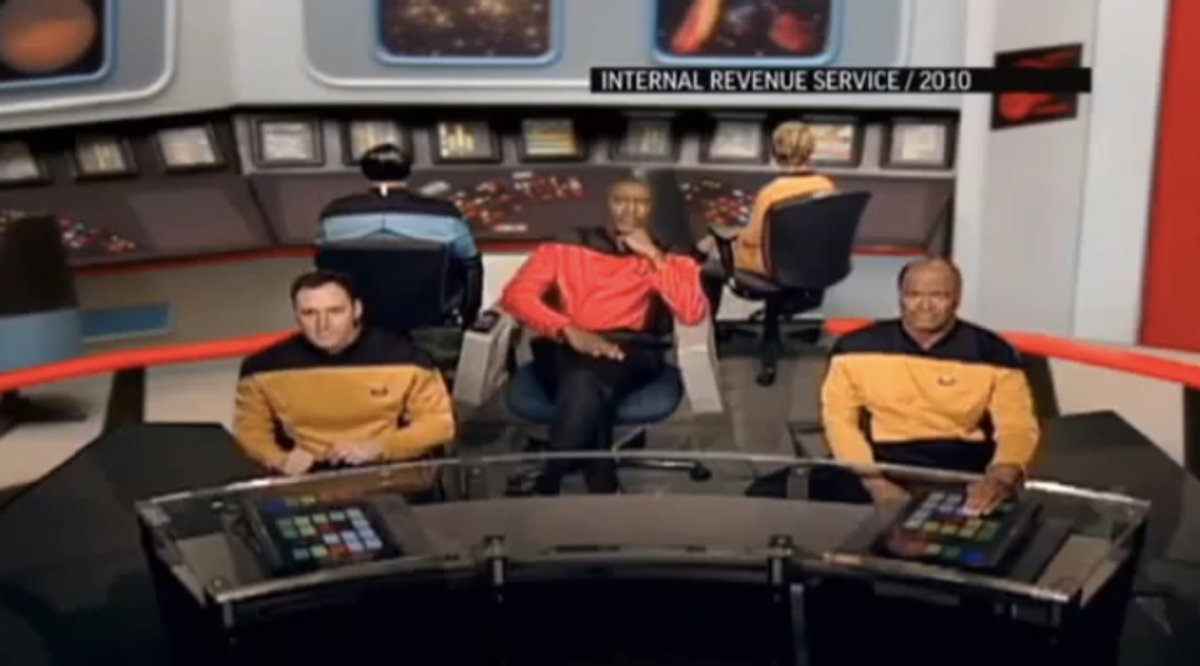 In 2010, the IRS boldly went "where no government employee has gone before" when it produced a six-minute "Star Trek" parody video, designed to train IRS employees about leadership.

It begins with the following monologue:

"Space: the final frontier
These are the voyagers of the Starship Enterprise Y
Its never-ending mission is to seek out new tax forms
To explore strange new regulations
To boldly go where no government employee has gone before."

The video, which features affectless government employees doubling as fist-bumping crew members headed toward planet Notax, is hilarious and jarring and so bad that it's good until you realize that the government agency paid for the video, along with another spoof of "Gilligan's Island," with $60,000 in taxpayer funds for production alone. And then, it's angering.

From CBS, who first obtained the video:

"CBS News filed a Freedom of Information request asking for the video after the IRS earlier refused to turn over a copy to the congressional committee that oversees tax issues: House Ways and Means. According to committee Chairman Charles Boustany, Jr. (R-LA), the video was produced in the IRS's own television studio in New Carrollton, MD. The studio may have cost taxpayers more than $4 million dollars last year alone."

IRS Acting Commissioner Steven Miller justified the creation of the videos by saying that one of the two videos was used to train employees in 400 locations in lieu of in-person training, thereby saving taxpayers $1.5 million.

But the IRS has apologized for the "Star Trek" video. "There is no mistaking that this video did not reflect the best stewardship of resources," the agency said in a statement. "A video of this type would not be made today."

Of the more recent "Gilligan's Island" parody, part of a 12-video training series, the IRS said, "This approach reflects a newer IRS model of using video to dramatically save on training and travel costs. Using video provides a more cost-efficient way of doing business than face-to-face meetings."

The agency assures the public that now, "all IRS videos are handled in a judicious manner that makes wise use of taxpayer funds while ensuring a tone and theme appropriate for the nation's tax system."