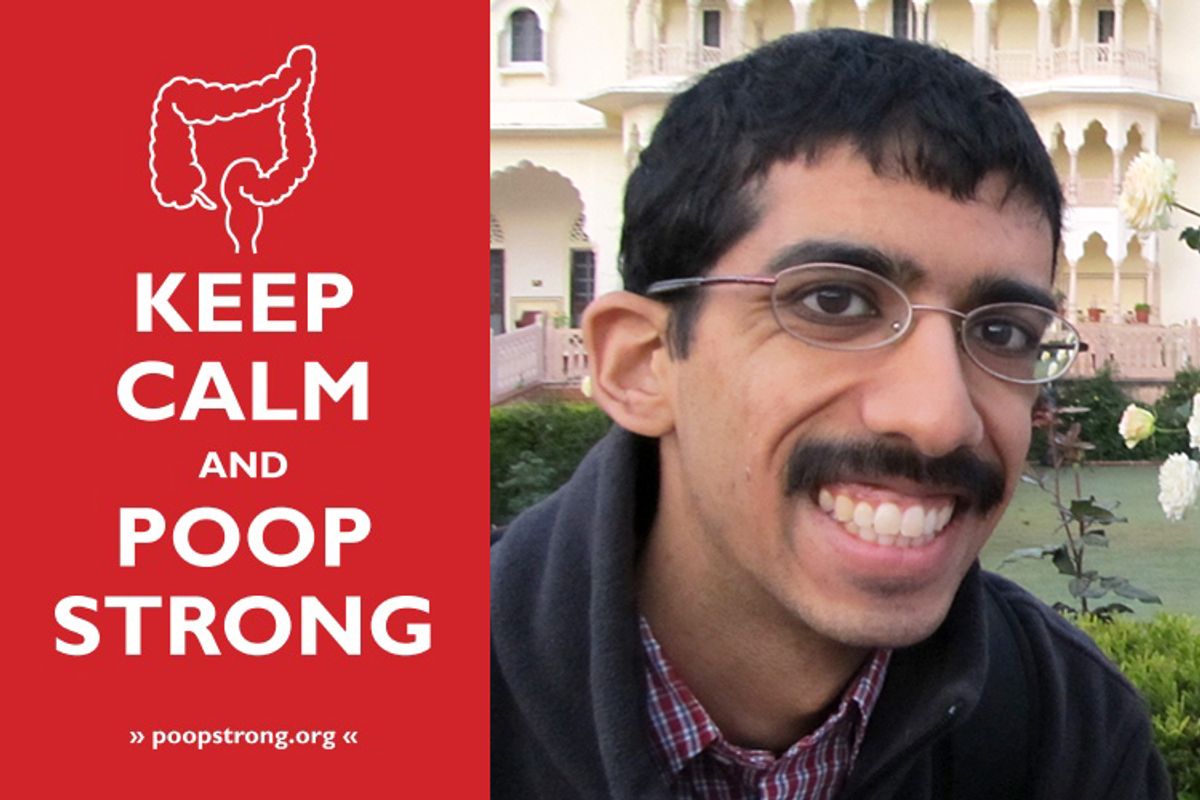 Arijit Guha and one of his T-shirt designs. (Arijit Guha)
--

"The lesson here isn't, 'Social media to the rescue.'" That's what Arijit Guha told me last summer, when I spoke to him about his public battle with Aetna insurance and his efforts to crowd-fund his way through his colon cancer treatment. And when Guha died in his home in Arizona on Saturday at age 32, he had not, in the end, been rescued by social media. But social media was changed for the better by him, in ways that will long continue to embolden and unite other patients dealing with the random viciousness of disease, and the capriciousness of our healthcare system.

In what has become an increasingly necessary strategy, the Arizona State graduate student quickly went into entrepreneur mode when he learned he had Stage 4 cancer. Guha created the cheeky, self-aware Poop Strong site to collect donations and sell merchandise to cover his medical bills and then, later, to support local wellness initiatives. When Aetna informed him he'd reached his insurance cap, he called out the company in an articulate, impassioned Twitter conversation that ultimately brought its CEO Mark T. Bertolini into the fray – and got him results.

We are at a moment in our country when desperately needed healthcare is becoming increasingly viewed as a luxury item. On Tuesday, the Associated Press reported on New York state's move to slash funding for cancer screenings for the uninsured -- while earmarking $54 million to renovate Buffalo's Ralph Wilson Stadium. No wonder Guha's hustle to save his life was hardly unique. Last year, I watched as my friend Will, an uninsured local artist, crowd-funded his way through the leukemia treatment and care that would take him through the final months of his life. Transgender activist and writer Kate Bornstein is currently in the midst of a fundraiser to assist with her medical bills and living expenses as she faces lung cancer and chronic lymphocytic leukemia. And this week, Oscar-nominated actress Karen Black announced she is likewise running a fundraising campaign for an experimental course of treatment for her ampullary cancer. Her husband told the L.A. Times Monday, "She has a modest pension and medical insurance (thank goodness), but as anyone knows who has fought cancer, that is not enough." And he is sadly, infuriatingly right on the money on that point.

Guha was, in many ways, one of the lucky ones. He had cleverness on his side – an appealing communication style that wed his wit with his outrage. It's what earned him the attention of a major insurance company, and got action where another person could have easily fallen through the cracks. Guha wanted to use that gift of online showmanship wisely. After his story blew up on Twitter last year, he told me, "These insurers are making billions in profit -- and they're benefiting off the fact they're offering insufficient insurance plans. I think more than anything now I have a much larger platform. I might as well give a voice to people who don't have much of their own or are ignored." The cause was important, he said, because, "You can go on the Internet and see all these sites for people and notice how little they’ve been able to raise. We shouldn't have to pick and choose who the winners are based on who has the best website or who has the most connections."

Over the weekend, Guha's wife, Healther, posted on Facebook that "My heart is aching, but the pain is eased a bit knowing that he has the support of such an amazing community of people, so many of whom have never met him." That's what social media can do, when deployed intelligently and compassionately. It can change an insurance company's mind. It can ease a person's days. It can create an "amazing community," and believe me, in the terror and isolation of disease, that's an extraordinary feat.

Guha knew that, and he used his savvy to make the Internet a better, more generous place. I'll be forever grateful for the summer afternoon I spent talking with him, a man who'd inspired a national conversation about how we care for people with cancer – and had proudly created a colon-themed, poop-centric personal brand in the process. And I'll remember the last thing he said, as he enjoyed his victory over his insurer and the attention he brought to the cause. He told me, "I'm feeling absolutely great."