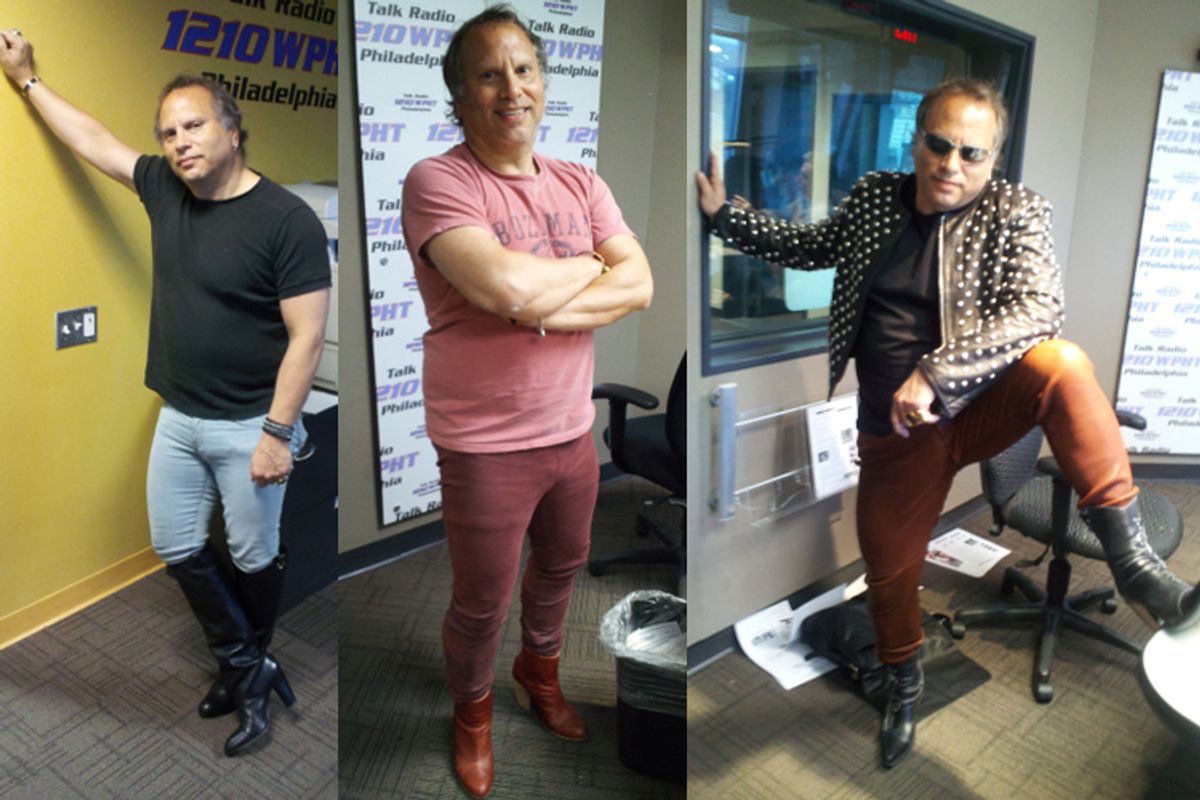 Buzz Bissinger, the author of the book "Friday Night Lights" and a new GQ piece on his shopping addiction, isn't the quiet sort. And he's finally dressing the part, in studded leather jackets and high-heeled boots. Bissinger writes from a Milan fashion show:

The writer's look has, until recently, not been particularly eye-catching: He mentions in his piece that he'd until recently worn "khakis from J.Crew and blazers and shirts from Brooks Brothers and Hickey Freeman and Jos. A. Bank." But something snapped in him when his youngest child went to college and his wife moved abroad for work, leading him to order off the Internet boxes and boxes of designer gear from "Gucci, Net-a-Porter, Neiman Marcus, Saks Fifth Avenue, Burberry, Ralph Lauren, Vince, Shopbop, ShopStyle, and, later on, Mr Porter and Moda Operandi." From 2010 to 2012, he says, he spent $587,412.97 on clothing. (Mr. Bissinger is the author of several books, sold the rights for "Friday Night Lights" to film and television, and is a contributing editor at Vanity Fair. His wife is a college administrator.)

There is some murmuring on Twitter that Bissinger's piece is an April Fools' joke. Arguments in its favor include the fact that Bissinger's claims are almost too wild to be believed -- he claims to have dabbled in transvestitism and homosexuality, and to wear women's accessories regularly -- and that he lists J. Crew and Zara as luxury brands. Arguments against include a gallery of Bissinger's outre outfits put up by CBS's Philadelphia affiliate, which tend to merge high and low (a T-shirt advertising Bozeman, Mont., with oxblood skinny jeans). He showed up to a May 2012 Entertainment Weekly interview in "metal-studded leather jacket, brown cowboy boots, and hoop earring." His Vanity Fair contributor photo depicts him in a schmancy-looking leather jacket -- perhaps one of the 81 he claims he owns.

And Bissinger is known for radical transparency. In recent years, he's made news for screaming at then-Deadspin editor Will Leitch on television while the latter sat there placidly. He's elaborated at length upon his seemingly-trolling endorsements of Mitt Romney (he later decried the "liberal media") and Lance Armstrong (Bissinger later called himself "deluded") in the pages of Newsweek. He has that publication's current cover story, on why Dennis Rodman's trip to North Korea was "the smartest move the famously eccentric former basketball ever made" -- and Bissinger clearly values eccentricity, and stunts. "The trouble with life today," wrote Bissinger on Rodman, "is that not enough is ill advised, virtually every important event staged and choreographed so what’s the effing point of even having them unless it’s George Bush and he throws up?" Bissinger is also known for his incendiary Twitter feed. Some examples are below.

Either Bissinger is long-con trolling his readers, having adopted a leather-daddy-ish garb a year or more ago in order to pull off an April Fools' joke in the pages of GQ (one that Mark Lotto, an editor at GQ, called "self-laceratingly honest" on Twitter), or he's being utterly serious. Or -- there's a third option -- for some writers in a media economy where provocation in work and in life is a net good, "trolling" and writing the self have become interchangeable.

Calls and emails to Bissinger, who is on assignment, were not returned.