Fear of marriage as "genderless institution" guides anti-gay crew in court today. Why SCOTUS may not buy it 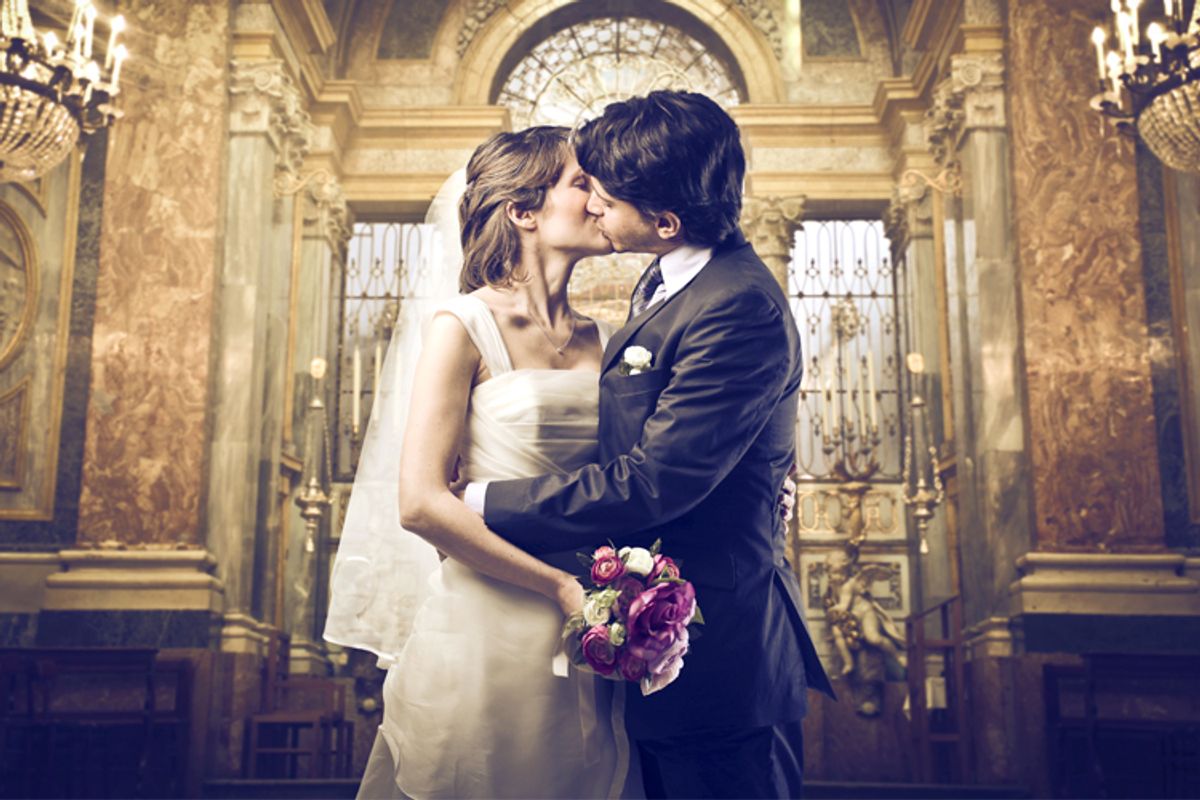 Even if the Supreme Court does decide to punt on the Proposition 8 case, today's oral arguments again made something clear: Defenders of the marriage equality ban are very, very anxious about gender roles. And a majority of the Court may not be buying it.

Defenders of California's ballot referendum banning gay marriage said today in court, and in their brief, that if marriage becomes a "genderless institution," children will suffer, because gay people can't procreate without help -- or rather, because marriage evidently exists to sanctify the accidental baby-making of men and women, despite the fact that so many women and men making babies today are rejecting marriage. Yes, this is their real argument.

Making it into a "what about the children" question sounds better than hating gay people for being gay, and it also sounds better than saying that men are intended for one thing and women for another. And yet that's exactly the implication made clear before the Supreme Court today. (The child-welfare argument may not work, either, no matter how much Antonin Scalia fulminated about the "sociological evidence" being too inconclusive about the impact of being raised by gay parents -- there was swing voter Anthony Kennedy wondering aloud whether the "voices of the children" of gay people should be heard.)

Kennedy asked Charles Cooper, the lawyer defending Proposition 8, "Do you believe this can be treated as a gender-based classification?" He was talking about marriage. Kennedy added, "It's a difficult question that I've been trying to wrestle with it." Cooper said no, and that previous courts hadn't found that marriage is a "gender-based classification." Cooper naturally wouldn't want to concede the point -- gender-based discrimination is subject to a higher bar of scrutiny by the court -- but he did say, "I guess it is gender-based in the sense that marriage itself is a gendered institution, a gendered term, and so in the same way that fatherhood is gendered [and] motherhood is gendered, it's gendered in that sense." That's something of a tautology: Marriage is gendered because men are men, women are women, and that should be enough.

Cooper also wilted under Justice Sonia Sotomayor's questioning of whether it would be justifiable to discriminate against gay people in a non-marriage context. He said it wouldn't. "I don't quite understand it," Sotomayor said, having cornered him. "If you're not dealing with this as a class question, then why would you say that the government is not free to discriminate against them?" In other words, Cooper has to justify why marriage is different, and his answer is because marriage is supposed to be for babies. (Or as he inauspiciously put it to Sotomayor, "Your Honor, that's the essential thrust of our -- our position, yes.") In the absence of childbearing, Cooper said, society would "refocus the purpose of marriage and the definition of marriage away from the raising of children and to the emotional needs and desires of adults, of adult couples." This was viewed as self-evidently terrible.

In their brief, Prop. 8's defenders don't make an argument that gender roles justify limiting marriage to being between a man and a woman, but it's implicit in their obsessive focus on "responsible childbearing." They write, "Throughout human history, societies have regulated sexual relationships between men and women so that the unique procreative capacity of such relationships benefits rather than harms society," and quote a definition of marriage that calls it “a lasting, socially enforced obligation between man and woman that authorizes sexual congress and the supervision of children.” (This does raise the question as to why so many people are petitioning to get into this un-fun-sounding "socially enforced obligation.")

You're meant to infer that irresponsible sex between gay people is not the state's concern, because no sad children would result, as they would inevitably from straight people fornicating. The fact that the link between sex and childbearing, and the link between marriage and childbearing, has already been severed for reasons that have nothing to do with gay people is left aside, except to note that when it happens, it is a bad thing: "Irresponsible procreation and childrearing – the all-too-frequent result of casual or transient sexual relationships between men and women – commonly results in hardships, costs, and other ills for children, parents, and society as a whole." To paraphrase, heterosexual single parents are allegedly terrible for society, so gay people can't get married. Why can't everyone just stay in their place?

It is surely inconvenient for Cooper and his co-counsels to have to face the two newest members of the court, who one way or another have failed to fulfill their apparent female responsibility of procreation within marriage -- Sotomayor is divorced, Kagan never married, and neither has children. (The third female justice, Ruth Bader Ginsburg, is not exactly known for her sympathy to arguments based on traditional sex roles.) Neither of these justices was ever likely to uphold a ban on gay marriage, but their questions helped get to the heart of the matter.

Indeed, one of the most ridiculous moments in the hearing occurred when Justice Elena Kagan sensibly pointed out that infertile people are allowed to marry all the time, provided they're of the opposite gender. The easiest way to pinpoint this is the fact that people over 50 can marry. Justice Antonin Scalia mocked this -- "I suppose we could have a questionnaire at the marriage desk when people come in to get the marriage -- you know, are you fertile or are you not fertile? -- and made a gross joke about Strom Thurmond's viable sperm, but it is in fact a highly relevant question. Because the argument isn't about children; if it were, the welfare of the children of gays and lesbians would matter, regardless of how they came into the world. The argument is about what enforces the difference between men and women, and in a society where gender roles are up for grabs daily, biology suddenly looks like it's all the "traditionalists" have left. Too bad for them, it isn't much.