"The Voice" keeps rolling right along 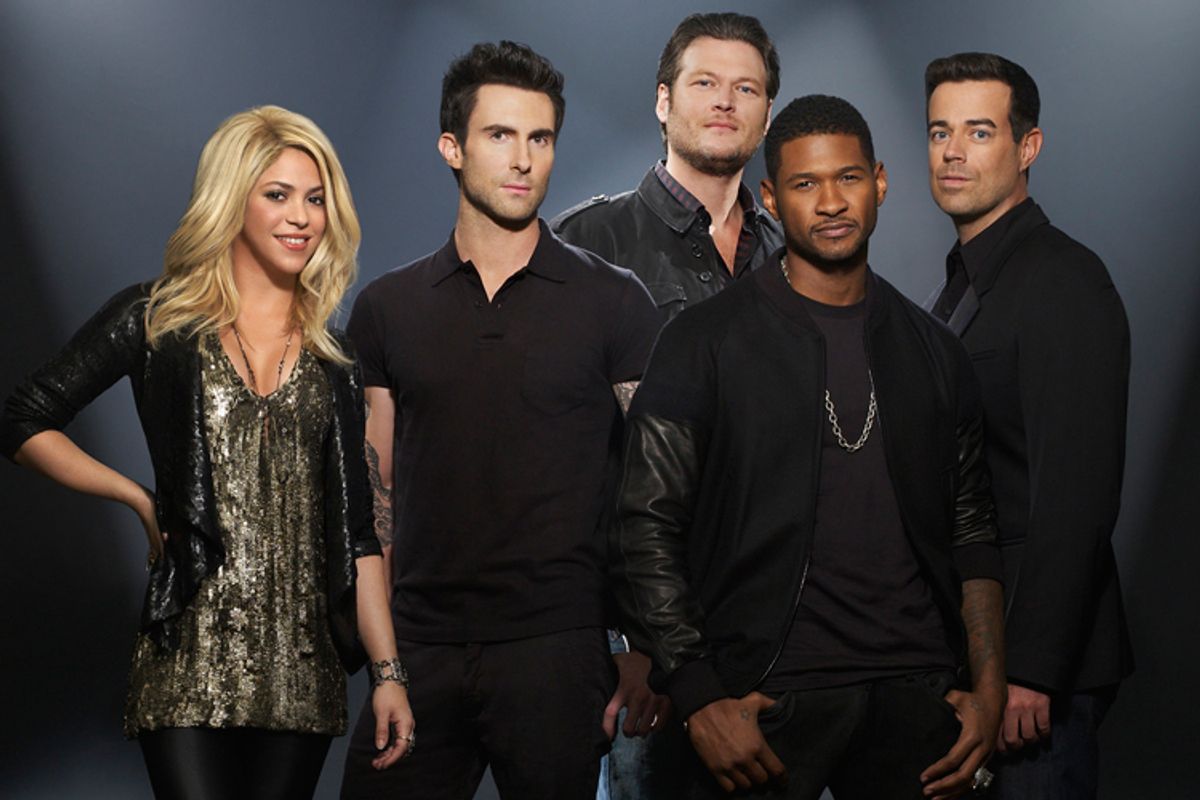 “The Voice” returned for its fourth cycle last night with two new, one-named judges replacing Christina Aguilera and Cee-Lo: Shakira and Usher. In the two years since “The Voice” premiered, judge shuffling has become common across all singing competition shows, with unpredictable effects. “Idol” survived the loss of Simon Cowell, Britney Spears didn’t make “X Factor” a smash, Nicki Minaj may be the best judge in that singing show’s history, but that hasn’t had much bearing on the current iteration of “Idol’s” ratings. Even more than the other singing franchises, however, “The Voice” seems judge-proof— not because the judges don’t matter, but because the format makes it harder for the judges to be boring. Even if they have nothing insightful or sharp to say about the singing, at least they have something sharp and insightful (or fine, semi-sharp and semi-insightful) to say about each other. "The Voice" remains a more polished piece of entertainment than its peers.

Adam Levine and Blake Shelton, the two singers who stuck around from “The Voice’s” previous seasons (and coached the winners), set the jocular tone, which, without Aguilera and Cee-lo has become even bro-ier. Levine, Shelton, and Usher are all flirts who like to flirt and will flirt with female contestants. When they are not personally flirting, they’re calling each others out on it, or Shakira is. Taking the piss out of the other judges is a trademark of all singing competition shows— Simon rolls his eyes at Paula, Nicki and Mariah Carey beef etc— but on “The Voice” it’s part of the game. The judges are jockeying for the singers to be on their team, and under the aegis of Shelton’s good ol’ boy-ness and Levine’s good ol’ boy-by-way-of-California-ness and their teasing rapport it’s all very frattily good natured.

It’s not like “The Voice” judges had so much to say as of yet. Last night they occasionally commented on tone or song choice— Levine, in particular, fancies himself a hardass— but if they weren’t being specific with the contestants, they were being specific with each other. The premiere had Shelton giving Usher a hard time for calling Nashville a state (Usher hung his head), Levine doing a super-dudish riff about how Blake’s wife Miranda Lambert would be pissed he picked hot twins for his team, and Shakira going after Adam about what it means to ‘sound like’ Adele.

Because the foursome are all trying to win the contestants over, they have to perfect their sales pitches. Adam is picky and cocky. He definitely feels like he runs the show at this point, and he’s not wrong. (At one point he told a contestant “I know Shakira's a lot prettier than I am. Don’t be blinded by lust.") Shelton is warm and fuzzy while still being macho, with an automatic allegiance to anyone slightly acoustic or country. Usher began by using as few words and as much smolder as possible, before transitioning into an “I, more than any of these people, can make you a global superstar” bit. Shakira likably uttered new-agey affirmations: she has so much faith in a contestant and since “Faith is the engine” the contestant should really go with her. (The contestant demurred.) “Idol” or “X Factor” would accentuate Shakira's pleasant blandness,  but “The Voice's” bias to banter encourages her to get a little feisty, which is better.

“The Voice,” unlike the other singing shows, pre-selects the talent. Everyone trying out for the show is at least pretty good and many of them are professionals. This helps keep the tone enthusiastic and light—there are no maybe mentally ill, delusional people on screen. (Though “The Voice” did linger longer on a young singer sobbing about his mother’s cancer way longer than is couth.) Like its contestants, "The Voice" is more professional, especially in the early rounds than “Idol” or “X Factor." Everyone happily, competently appears to be doing their jobs. It's a slicker experience. If its missing some of the shaggy weirdness of the other programs, it's much more consistently entertaining: no surprise it's still a hit.