Conservatives react to DOMA and Prop 8: The best of the worst

Gay marriage could be the end of children -- or capitalism. Erick Erickson just hopes there's room enough in hell 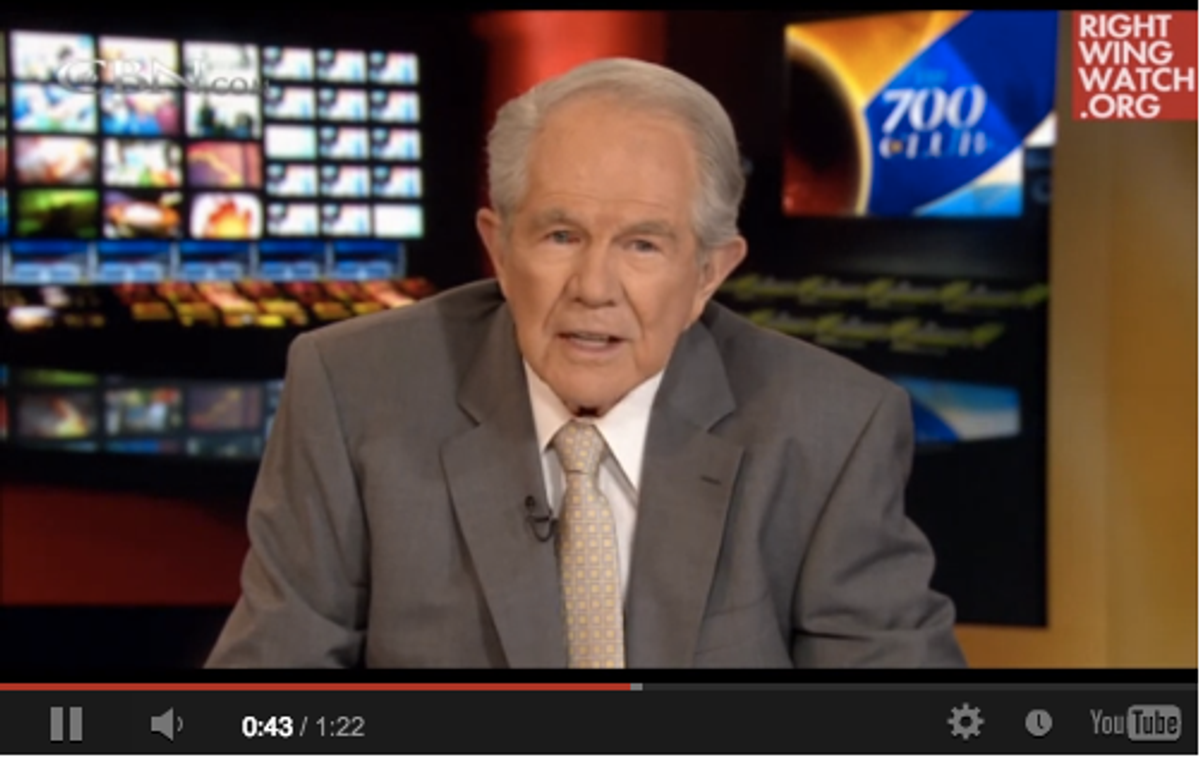 While nine justices of the Supreme Court spent Tuesday and Wednesday talking about real-live same-sex couples and their real-live children, Pat Robertson, Erick Erickson and other conservative Henny Pennys fretted incessantly that the heterosexual sky was falling.

Allowing gay couples to access the same rights and benefits as straight couples is an attack on “the foundation of our society" led by “a few people [who] want to have their way of doing of sex affirmed by everybody else,” Robertson warned on the "700 Club" on Wednesday.

Erickson went on a Twitter tirade while the high court heard oral arguments on Tuesday and Wednesday, opining "You're not really loving your neighbor when you're cool with him staying on the road to hell."

Adding, "I don't believe anyone who supports gay marriage and says polygamy is a bridge too far. It has far greater historic foundations" and "So when the left begins advocating polygamy, will they use the infinity sign instead of the equal sign?"

Despite all of the lip service (keyboard service?) to the sanctity of straight marriage, Erickson took a Twitter detour toendorse pretend Appalachian Trail-hiker and extramarital affair-haver Mark Sanford: "Mark Sanford is personally flawed, but so are we all in different ways. His policy convictions are sound. I will take that."

Breaking from the traditional line of panic, Hagee promised on "Hagee Hotline" that gay marriage would be the death of capitalism:

The only relationship in natural law that can produce consumers is the relationship between a man and a woman. When you create a society that does not recognize this relationship as the foundation of its existence and you cease to produce what is required to sustain your economy, you will not survive.

On Wednesday, Lopez nodded along with two conservatives who argued that it wasn't federally sanctioned anti-gay discrimination that was keeping DOMA plaintiff Edith Windsor down, it was the "death tax!" Quoting heavily from Bill Breach and Ryan Anderson, Lopez suggests that its tax reform that could "really help" Windsor while sparing the country a "a judicially imposed revolution."

Forget the fact that Windsor herself has said that the case is about more than estate taxes -- it's about affirming the value of her life with and love for Thea Clara Spyer. Spyer died in 2009, after 42 years as a couple and two years of marriage. Windsor called their decision to marry in 2009 "magic."

"It turns out marriage is different,” Windsor told reporters on Wednesday. “It’s a magic word. It is magic.”

Lopez later took to Twitter to suggest (in tweet-speak) that "2 legalize marriage btween 2 people of same sex would enshrine in law that moms & dads are interchangeable or irrelevant..."

Addressing the sparsely attended conservative March for Marriage, Roback Morse warned that the children of gay couples will "resent their parents" for putting their "selfish adult needs" first (emphasis mine):

Eventually, young people are going to see that redefining marriage sets aside the interests of children for the convenience of adults. Now in the unhappy event that the Court should redefine marriage, which we pray that they will not — we pray that they will allow us to continue this nationwide conversation and discussion that we desperately need to have. But if they do redefine marriage, 40 years from the young people of that generation will have one simply question for our generation, “What were you thinking?”