Idea for Supreme Court: Focus on law, not politics

Justices' comments suggest marriage equality might be judged not on legal merits but irrelevant, external factors 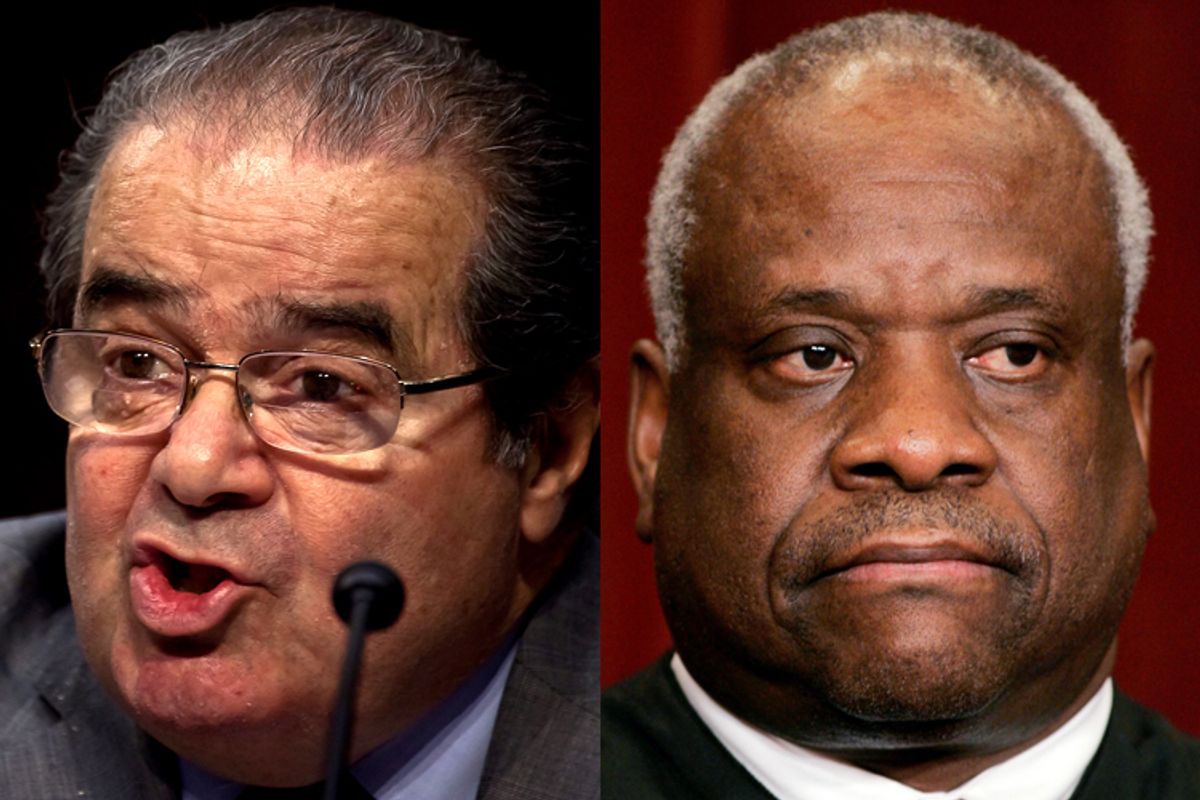 Are discriminatory laws, like big financial institutions, Too Big to Fail? After the statements of Supreme Court justices during yesterday's hearing on California Proposition 8, this is the single biggest unanswered -- and still unasked -- question in the fight for equal rights.

To appreciate how that single radical jurisprudential theory of Too Big to Fail connects issues as disparate as financial regulation and same-sex marriage, remember that the last few weeks has seen America's normally opaque government for the first time articulate that theory in public. As you may recall, the attorney general, the assistant attorney general and President Obama's nominee to head the Securities and Exchange have all admitted that prosecutors take into account external factors (macroeconomic effects, shareholder losses, etc.) when deciding whether to charge lawbreaking financial institutions with serious crimes.

If this seems like a radical and corrupt notion, that's because it is. The reason the statue of Justice wears a blindfold is because justice is supposed to be blind to anything other than lawbreaking. It is not supposed to take into account any other factors like potential economic consequences or political tumult because once those factors begin predetermining actions of the justice system, that system by definition loses its impartiality.

Yet as evidenced by Supreme Court justices' comments yesterday, external factors are exactly what are being considered not merely in bank prosecutions, but also in one of the biggest civil rights fights in modern history: the case that asks the court to decide whether state same-sex marriage bans violate the equal protection clause of the U.S. Constitution.

To detect which particular external factors seem to be at work in this battle, first note that during Tuesday's Supreme Court hearing on same-sex marriage, "justices said they were wary of ruling broadly in a way that would make gay marriage legal nationwide," according to the Los Angeles Times.

Some, like Justice Anthony Kennedy, seemed so afraid of a "broad" ruling that they floated the cowardly idea of backing the court out of having to rule at all. Others, like Justice Sonia Sotomayor, suggested it is too soon for the court to rule on gay marriage. As proof, she noted that "we let racial segregation perk for 50 years from 1898 to 1954" and only then did courts get involved. Both seemed to be echoing earlier sentiments from Justice Ruth Bader Ginsburg who said of another civil rights issue, a woman's right to choose, that the court's Roe v. Wade ruling "moved too far, too fast."

This is precisely where the dangerous notion of Too Big to Fail creeps in.

It seems the justices and most of the court speculation is far more concerned with external factors -- in this case, the possible future (and thus, unknowable) political fallout from potential rulings -- than with simply evaluating same-sex marriage laws and ruling on their constitutionality. Put another way, the justices seem to be suggesting that the political passions attached to same-sex marriage bans may make those bans Too Big to Fail (or, at least too big for the court to overturn). And worse, it seems that many of those justices may be trying to shape a ruling based not on questions of constitutionality alone, but on their individual subjective perception of what the fallout from a ruling is most likely to be.

It is certainly true that the fallout from refusing to prosecute banks and from refusing to overturn same-sex marriage bans are different. But the point is that the legal precedent at work is exactly the same -- and that means not merely that the justice system is corrupted, but that the social mechanics and incentives necessary for law and order are being permanently skewed.

So, for instance, in the financial sector, the Too Big to Fail precedent effectively encourages banks to become as large and as sprawling as possible so that when they do break the law, prosecutors will see prosecution as too dangerous for the economy as a whole.

Similarly, in civil rights litigation, the Too Big to Fail precedent may disproportionately empower and therefore embolden proponents of discrimination by telling those bigots that perception of political fallout is more important than a law's constitutionality. That effectively tells bigots that if they can realistically threaten a divisive culture war in response to a pro-equality court ruling, then that alone may prevent such a ruling from ever being handed down in the first place.

No doubt, that's music to the ears of those like Republican operative Karl Rove and Republican mouthpiece Peggy Noonan who seem to want to deny or delay equal rights. Just as neo-confederates did during Jim Crow, they are claiming that when it comes to equality, "states rights" should prevail and that if progress is going to happen at all, it should happen slowly. In making such an argument, they are playing right to the ascendant notion of Too Big to Fail - they are implying that an anti-gay backlash to a pro-equality ruling should make same-sex bans impervious to wholesale judicial rejection.

One overarching problem with that line of reasoning (beyond the fact that it blatantly ignores the constitutional right to equal protection under the law) is how it reduces the constitution's protection of minority rights, and undermines the whole notion of a judiciary that is insulated from public opinion.

Think about it: that branch of government exists separately from the other two elected branches specifically so that it can rule without regard to the electorate's political whims. It was deliberately designed this way, in part, so that the court could guarantee that a law's constitutionality is never contingent on majority public opinion (that's the whole minority rights thing - even if 90 percent of Americans support a law that openly embraces discrimination, the independent judiciary is supposed to enforce constitutional precepts against such a statute). Indeed, a law is supposed to be either constitutional or unconstitutional, regardless of whether it is divisive or has negative political fallout. The Supreme Court and anti-gay conservatives seem to be saying the opposite - they seem to be tacitly endorsing a stealth form of mob rule, and then citing the prospect of a mob backlash to argue that same-sex bans are Too Big to Fail.

If that mob rule ideology and Too Big to Fail doctrine are allowed to prevail, there will be real human consequences for LGBT people who would continue to be subjected to institutional discrimination. Those are consequences that should be way too big to tolerate.