Despite the company's anti-gay profile, a Rancho Cucamonga Chick-fil-A says they're "not about hate" 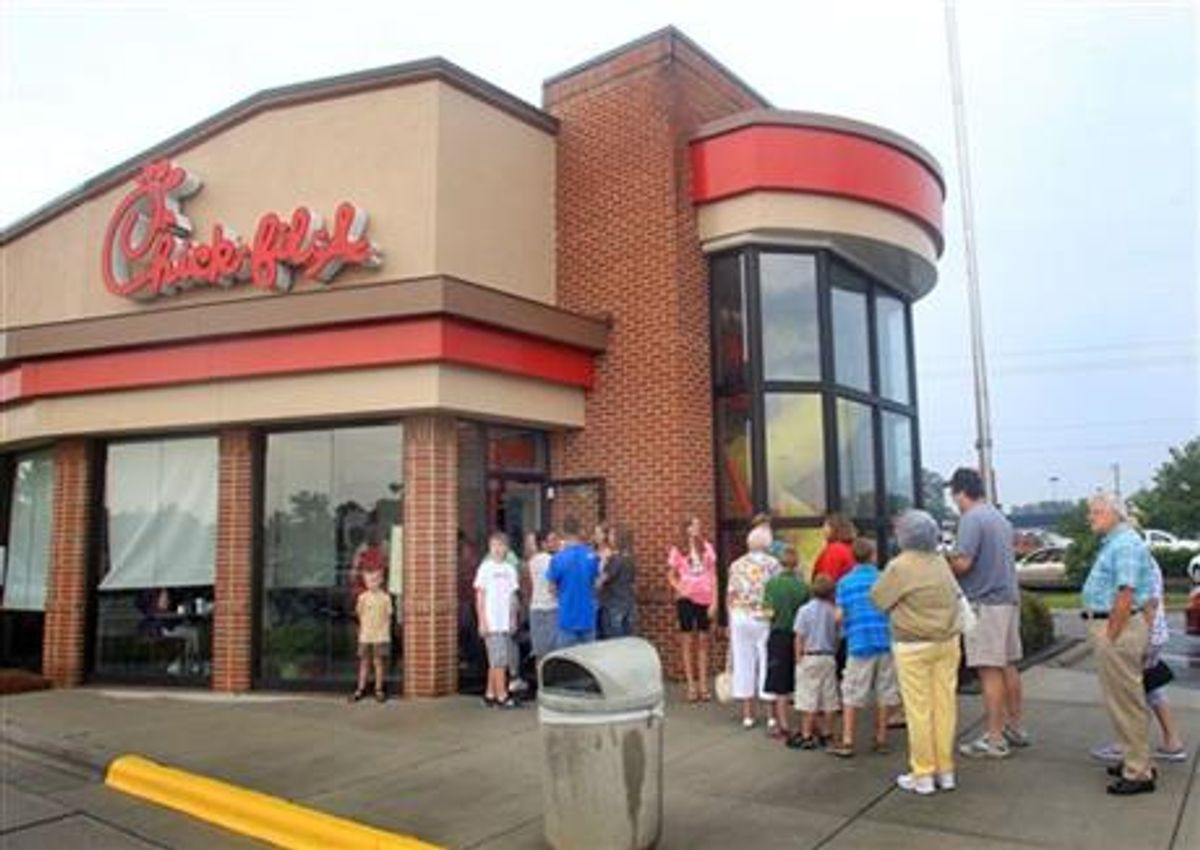 Corey Braun, the owner of a Rancho Cucamonga Chick-fil-A, handed out coupons for free chicken to dozens of marriage equality supporters at a California rally this week, breaking with the company's national profile as a corporate opponent of gay marriage.

"There were a lot of things said over the past year," Braun told the Inland Valley Daily Bulletin. "I wanted to show that Chick-fil-A doesn't discriminate against anybody. We serve everyone. We're happy to serve the community and this was an opportunity to have this group come in and show them our hospitality regardless of their beliefs, sexual orientation, or whatever. " Adding: "Chick-fil-A has never been about hate."

The Rancho Cucamonga franchise may not be "about hate," but many critics believe comments from Chick-fil-A president Dan Cathy are blatantly anti-gay. During a 2012 radio interview, Cathy addressed the issue of marriage equality by saying: "We’re inviting God’s judgment on our nation when we shake our fist at him and say we know better than you as to what constitutes a marriage. And I pray God’s mercy on our generation that has such a prideful, arrogant attitude that thinks we have the audacity to redefine what marriage is all about.”

Cathy's statement prompted strong reactions on both sides. Anti-gay rights advocates swarmed the fast food chain, initiating a "Chick-fil-a Appreciation Day" and turning waffle fries and chicken sandwiches into a political flashpoint. Gay rights groups countered with a boycott, and have continued to use the chain as a symbol of corporate opposition to equal rights. Earlier this week, activists taped dozens of pro-gay marriage signs across the windows of a Texas Chick-fil-A.

But in Rancho Cucamonga, the relationship between the franchise and the LGBT community seems to be less antagonistic, according to Eden Anderson, a board member with the local LGBT rights group Equality Inland Empire who was present at the rally:

What I experienced with the community, is when people are open and apologetic and accepting, it's touching to us. It feels like acceptance and we just want to be accepted and engaged in society, so when it's confirmed, I think the overall reaction was, yes, certainly that Chick-fil-A in Rancho Cucamonga is welcoming to us.

But this peaceful coexistence may be local, and relatively superficial. As a report from the Washington Post notes, the Christian fast food chain has previously come under fire from lesbian, gay and bisexual and transgender rights groups for making large financial donations to anti-gay groups.