UPDATE: The NAACP condemns a member's comments about the case 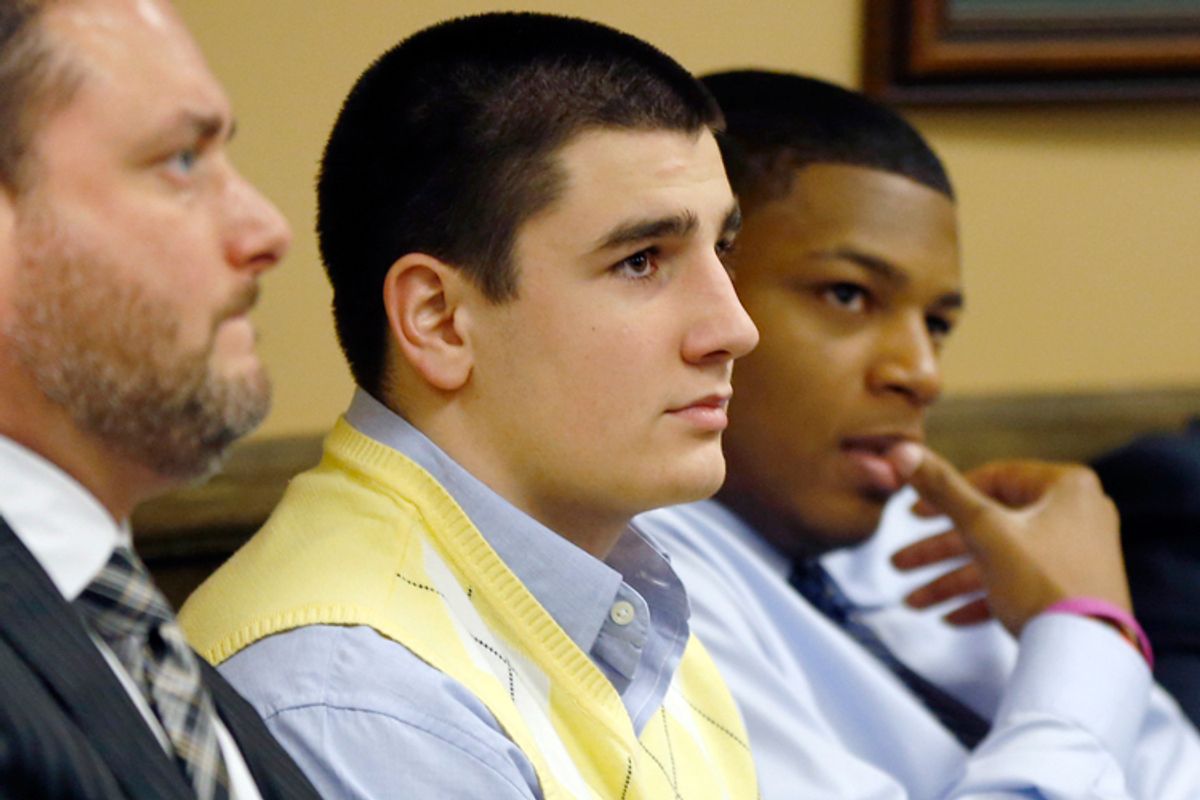 It's been almost two weeks since the guilty verdict was handed down in the Steubenville, Ohio, rape case, but victim blaming just goes on and on.

Though Trent Mays and Ma'lik Richmond were convicted on March 17 of raping their 16 year-old classmate, Steubenville's former NAACP leader Royal Mayo has offered his own very different version of events in a Thursday interview for the International Business Times. Speaking with writer Charles Poladian, Mayo ignores the verdict and refers to the girl as the "alleged victim," saying, "They’re alleging she got raped; she’s acknowledging that she wanted to leave with Trent."

Apparently in Mayo's mind, if you leave a party with a boy, you've signed off for whatever he may then do to you, even if you're unconscious.

Mayo further questions the girl's behavior that evening, asking, "She said her mother brought her to the party, at 3 o'clock, with a bottle of vodka. Where did you get it, young lady? You brought it from home?" Got vodka in your house? Asking for it. It's an interesting perspective, coming from a man who says he knows Richmond personally and that the young man told him last summer, "No, Mr. Mayo, we didn’t do anything to that girl. I don’t know what these rumors are; I don’t understand it."

At the sentencing earlier this month, Richmond's father told the victim's family, "I'm sorry for all you had to go through, and I hope somewhere in your hearts that you can forgive Trent and Ma’lik for the pain that they caused your daughter and put you through." Yet Mayo believes there are too many loose ends to the case that "seem odd" to him.

Meanwhile, he has sympathy for the Steubenville football coach Reno Saccoccia, who, like several of the local parents and school officials, is still under investigation for how the rape was handled. A text from Trent Mays that was uncovered during the investigation describes the coach's alleged response. "I got Reno," Mays wrote. "He took care of it and sh-- ain't gonna happen, even if they did take it to court. Like he was joking about it so I’m not worried." Mayo, however, describes Saccoccia as a man who's endeavored "to keep black kids out of harm’s way and white kids honestly."

It's not a stretch to say that there's a whole lot more to what happened in Steubenville than the actions of Trent Mays and Ma'lik Richmond. It's a story so wide-ranging in scope as to be mind-boggling -- and the number of people who knew about, documented it and made jokes about it is revolting. None of that, however, changes what a court of law has already decided. There is no "alleged" sexual assault here. And it bears repeating, again and again and again, that the real victim here isn't a promising football player. It bears repeating until guys like Mayo understand. "It’s like these two were sacrificed," he says, "the poor black kid and the white kid who is from the next county."

UPDATE: On Thursday, the national NAACP issued a statement saying,"The NAACP abhors the remarks attributed to Royal Mayo regarding the rape victim in the Steubenville. The remarks are Mayo’s own, and do not reflect the position of the NAACP and its membership." Mayo is a member of the Ohio NAACP executive committee. The statement added, "Mr. Mayo is not the president of the Steubenville NAACP and is not a spokesman for the NAACP. The article attributing him as such has been corrected by the International Business Times. Rape is a despicable crime of violence. The NAACP understands that comments that blame victims for the actions of their attackers contribute to and perpetuate a culture of acquiescence to rape. The NAACP advocates strongly for a society where victims of rape and sexual assault can come forward and seek legal redress without further retribution from the community, media or society at large."

NAACP spokesman Ben Wrobel told Salon Thursday, "We respect Salon and its readers, and we want to make sure you get the right information."