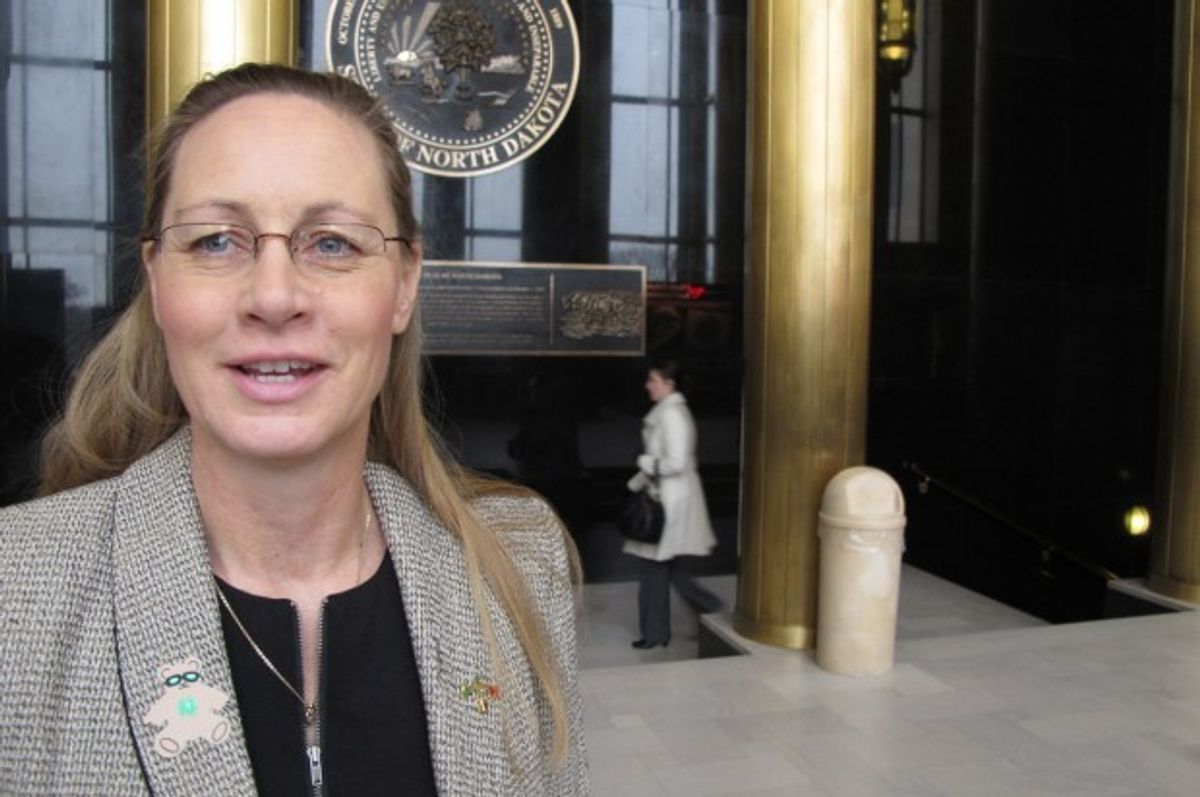 When Republican State Rep. Bette Grande responded to critics over the financial burden of defending North Dakota's unconstitutional ban on abortion at six weeks or earlier, the "fiscal conservative" explained that she “didn’t look at [the measure] from the financial side of things” but from the “life side of things.” Grande went on to say that “fears about a legal challenge” shouldn’t prevent other states from pushing forward with similar unconstitutional laws.

Unfortunately, she may be right.

According to a report from MSNBC, a non-profit conservative litigation group has offered to defend the state ban completely free of charge. Liberty Counsel chairman Mat Stavers extended his organization's pro-bono support through a public statement this week:

Cost should not be a part of Gov. Jack Dalrymple’s decision to sign or veto bills... Liberty Counsel will defend these laws pro bono. No rights are more fundamental than the right to life. Without life, all other rights are irrelevant.

Liberty Counsel isn't the only anti-choice group offering to support North Dakota in its political push to deprive women of their constitutional rights. Republican State Sen. Margaret Sitte said others have "lined up" to back the country's most extreme abortion ban: "Many organizations are standing ready to join with our attorney general and they have sent us emails saying they will bear the entire cost to defend these bills," she said in a video statement.

But reproductive rights groups have also stepped in to defeat the ban, reports the Associated Press:

The Center for Reproductive Rights announced Tuesday that it has committed to challenging the fetal heartbeat bill on behalf the clinic. The New York-based group already represented the clinic for free in a lawsuit over a 2011 law banning the widely accepted use of a medication that induces abortion. A judge has temporarily blocked enforcement of the law, and a trial is slated for April in Fargo...

Julie Rikelman, litigation director for the Center for Reproductive Rights, said the group has provided three attorneys to argue that case. But in the recent round of legislation, the fetal heartbeat measure is priority because it would effectively ban abortion in the state, she said.

“The impact is very, very clear,” she said. “It would have an immediate and very large impact on the women in North Dakota.”

Rikelman said the center also would support the clinic in other litigation, if need be and at no cost.

Tammi Kromenaker, director of the Red River Women’s Center is optimistic that reproductive rights (limited as they may be by other state laws) will ultimately prevail. But the head of North Dakota's last remaining abortion provider also believes these measures jeopardize women's health and waste valuable time and money trying to roll back reproductive rights. As she told Amy Goodman in an interview on "Democracy Now":

We’re already engaged in litigation with the state. And a judge in that case did give us a temporary injunction, because judges give those injunctions because they feel that the plaintiff will prevail. And that was on a medication abortion case, not this much more blatantly unconstitutional House Bill 1456, the heartbeat ban. So what we want to reassure our patients and we’ve put on our website and on social media posts is that we’re open, we’re still here, we’re still able to offer abortion services. And I believe that we will prevail. And unfortunately, this will just be a giant waste of time, energy and taxpayer dollars.