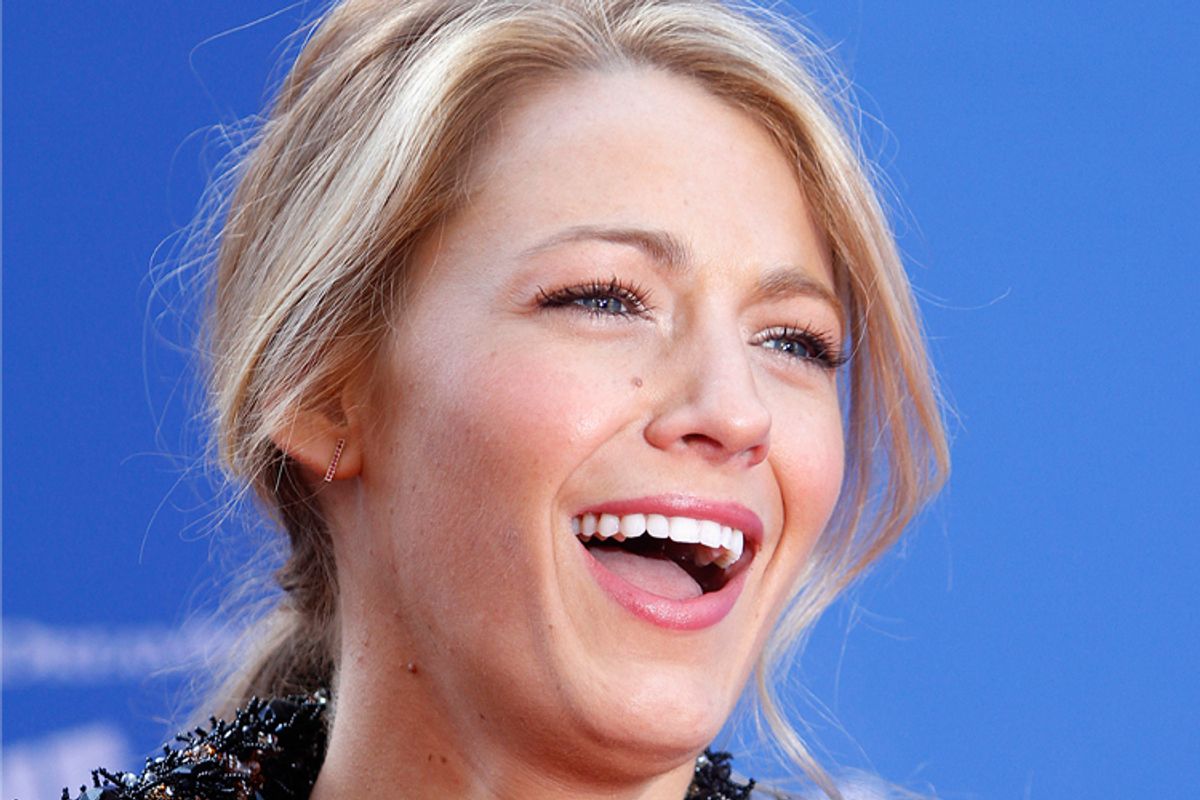 Sure, Blake Lively was cut from this year's hit "Side Effects" after requesting too much money, her last two acting gigs were the now-concluded series "Gossip Girl" and last summer's dud "Savages," and she doesn't have any new roles on the horizon.

But don't pity her -- she's devoting her time to baking.

The 25-year-old actress, who resides with her husband (the actor Ryan Reynolds) in the rural village of Bedford, New York, has lately been in the entertainment press for buying a giant oven and for attending the opening of a Target in Canada. "It feels nice to get a good deal and a great product," Lively told the Toronto Sun.

Lively is just the latest actress to devote herself to performing the role of a real housewife of Hollywood once acting dries up a little. Her fellow Toronto Target attendee, Sarah Jessica Parker, talked to the Sun about kids' bathing suits and Easter baskets. Jennifer Garner is by now more famous for showing up at awards ceremonies on the arm of Ben Affleck, doing interviews about children's skin care, or for paparazzi photos shopping for school supplies than has been in years for her movie work. And Jessica Alba, whose last live-action role in wide release was as the mom in a 2011 "Spy Kids" sequel, has launched a weird feud with Gwyneth Paltrow. Alba has claimed that her book "The Honest Life" is more feasible for the workaday housewife than Paltrow's tips in email newsletter Goop.

But all of these actresses are allies, not enemies: they're united in bringing back an old-school sort of stardom, from the studio era when actresses would use their families and domesticity to bolster their images. Think of Joan Crawford allegedly adopting children solely for publicity photos, or Katharine Hepburn -- that most undomestic of stars -- publishing a brownie recipe. Those stars were humanized (at least for a time!) by their domestic touches. Later came the realization that in a celebrity culture that simultaneously rewards and reviles edgy or neglectful behavior generally, the cover of Redbook and adulation is easy to snag by hewing to an ideal of domestic perfection and talking about it, loudly.

Today's stars use it to continue manufacturing press. Any celebrity can have or adopt a child or get good at cooking -- it's the truly clever one who can insert herself into the attachment-parenting debate or have an entire second career as a decorator once the agent stops calling.

Perhaps Lively's truly interested in cooking and home decor -- she did interviews about a class she took at Le Cordon Bleu in 2010 -- but there's no denying that it's a productive angle for the public figure moving from "actress" to "celebrity." Gwyneth Paltrow, for instance, gets more press coverage than she did in her mid-2000s dry spell for perpetually breaking her silence on what food is good for kids. And if there's something about it that seems a bit fake -- Paltrow is a well-known, award-winning actress with the means to order in every night, for instance, and it's hard to reconcile Parker's image as Carrie Bradshaw with her interest in kids' bathing suits or believe that Alba tests recipes all day long -- it seems ungenerous to say so.

Though not herself a mother, just someone who loves homemaking, Lively's making herself skew older: if there's one way for a 25-year-old actress to set herself apart from the Jennifer Lawrences and Kristen Stewarts that snatch up all the roles, it's by making herself safe, approachable, and comforting. Expect the cookbook soon -- and then a career renaissance, if not the one Lively first imagined.