While visiting a Miami port Friday, the president laid out a plan to create new jobs through public works projects 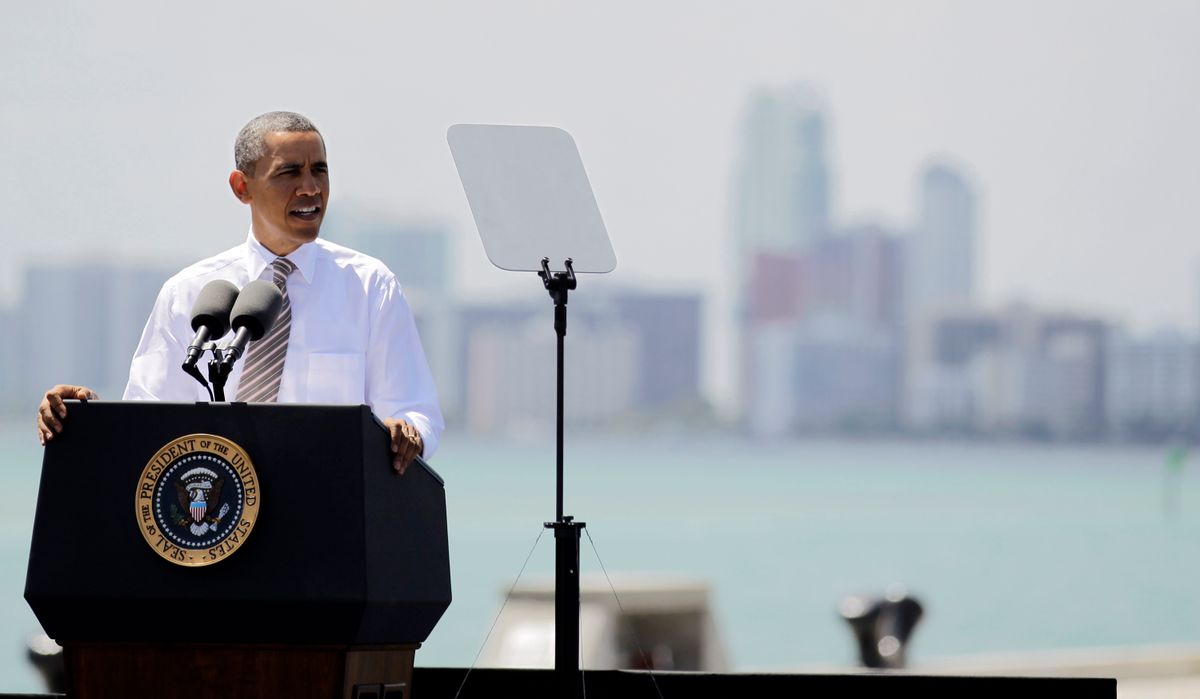 President Barack Obama speaks at a port in Miami, Friday, March 29, 2013, promoting a plan to create construction and other jobs by attracting private investment in roads and other public works projects. (AP/Luis M. Alvarez)
--

MIAMI (AP) — Trying to show that the economy remains a top priority, President Barack Obama promoted a plan Friday to create construction and other jobs by attracting private money to help rebuild roads, bridges and other public works projects.

Obama fleshed out the details during a visit to a Miami port that's undergoing $2 billion in upgrades paid for with government and private dollars. The quick trip was designed to show that the economy and unemployment are top priorities for a president who also is waging high-profile campaigns on immigration reform and gun control.

Obama said the unemployment rate among construction workers was the highest of any industry, despite being cut nearly in half over the past three years.

"There are few more important things we can do to create jobs right now and strengthen our economy over the long haul than rebuilding the infrastructure that powers our businesses and economy," Obama said. "As president, my top priority is to make sure we are doing everything we can to reignite the true engine of our economic growth — and that is a rising, thriving middle class."

Among the proposals Obama called for, which require approval from Congress, are:

—$4 billion in new spending on two infrastructure programs that award loans and grants.

—Higher caps on "private activity bonds" to encourage more private spending on highways and other infrastructure projects. State and local governments use the bonds to attract investment.

—A renewed call for a $10 billion national "infrastructure bank."

Arriving at the expansive port in Miami, Obama stood inside a double-barreled, concrete-laced hole in the ground, touring a tunnel project that will connect the port to area highways. The project has received loans and grants under the programs Obama touted and is expected to open next summer.

The president made private-sector infrastructure investment a key part of the economic agenda he rolled out in his State of the Union address last month. In the speech, he also called for a "Fix-It-First" program that would spend $40 billion in taxpayer funds on urgent repairs.

Congressional approval is not a sure bet, considering that House Republicans have shown little appetite for Obama's spending proposals. In fact, the infrastructure bank is an idea Obama called for many times in the past, but it gained little traction during his first term.

Obama's focus on generating more private-sector investment underscores the tough road new spending faces on Capitol Hill, where Republican lawmakers often threaten to block new spending unless it's paid for by cutting taxes or other spending. "These are projects that are helpful to the economy and shouldn't break down on partisan lines," said White House spokesman Josh Earnest.

But Florida Republicans, including Gov. Rick Scott, faulted Obama for being "late to the party." Before Obama arrived in Florida, Scott argued that state taxpayers have had to pick up too much of the tab for this and other port projects because the president was slow to support them.

Alan Krueger, chairman of the White House Council of Economic Advisers, told reporters traveling with Obama that the initiatives discussed Friday will cost $21 billion, not including the $40 billion for "Fix-It-First." Krueger said any increased spending associated with the proposals would not add to the deficit.

Krueger said details of how the programs would be paid for would be included in the budget Obama is scheduled to release on April 10.