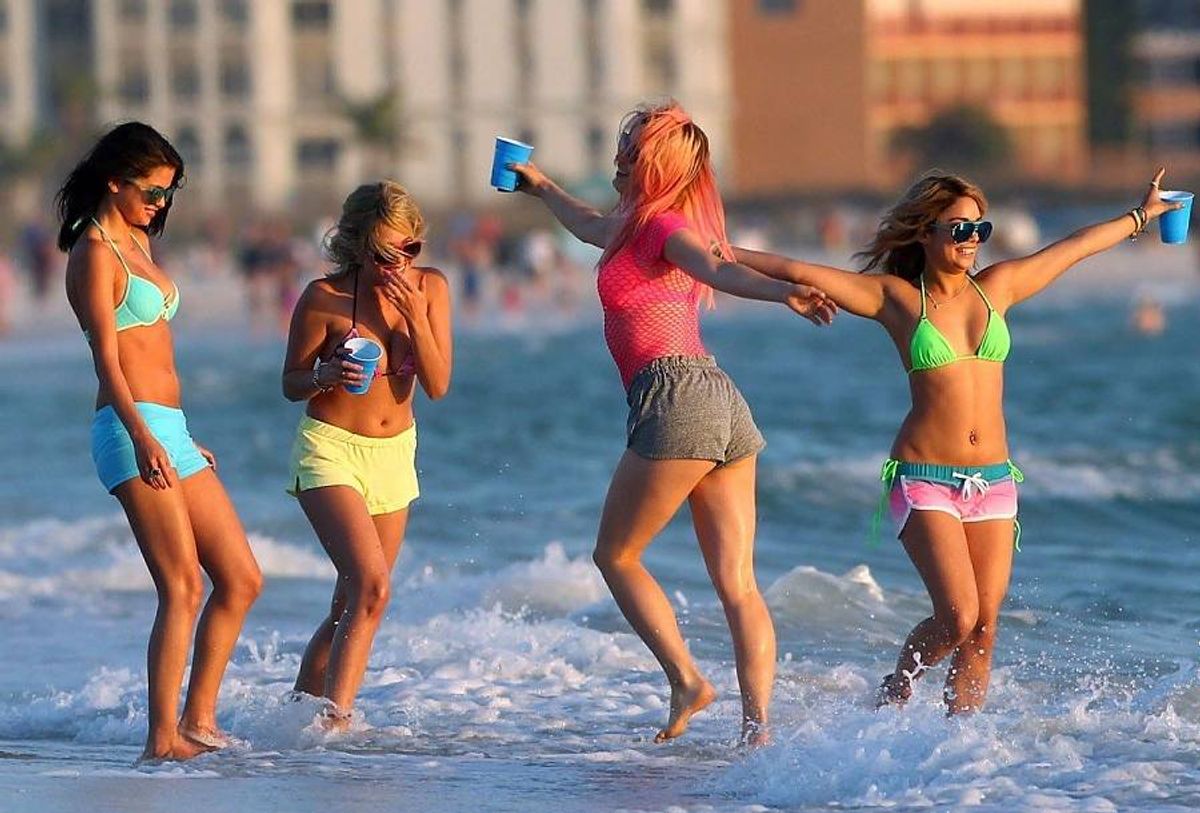 Harmony Korine’s Spring Breakers exposes the darker inner regrets that fester beneath the intoxicating day-glo of girls going absolutely wild in the hypnotic Florida sunshine. But what about the real Girls Gone Wild, those sometimes-underage revelers caught permanently between beer-stained contracts and Joe Francis’ camera lens? What about the real young women whose acts of sex come with regrets? Haven’t we all -- especially in our youth -- found ourselves mentally suspended in moments of coercion, moments we smile through by rote? In Spring Breakers, those smiles are reflected back to us, glistening softly with the lipstick we’ve applied in the broken mirror that is America.

In Spring Breakers, director Harmony Korine viscerally captures the emotional, mental and sensual inner process of coercion, both when he shows Faith (Selena Gomez) nearly quaking under the weight of Alien’s (James Franco) sweet and sinister cajoling, and also when our leading coeds (Ashley Benson and Vanessa Hudgens) corner Alien, and the tables are turned. We watch Korine’s cast flawlessly embody those gray area experiences that young people in particular seem to stumble into—the moments when life mimics the artistic style of this film, and the only real explanation is: It’s just sort of how it all happened, that’s all.

I can’t think of a single woman I know who is entirely free of sexual encounters that she regrets, for whatever reason. Spring Breakers is a surreal place to witness just the sort of real dilemmas that come with being young and beautiful and not yet entirely sure what’s what in the world. Fortunately for most, those moments play out with lower stakes and without the sting of being publicly scrutinized, acting as a container for society’s wayward projections.

But the real Girls Gone Wild tend to be less fortunate. It’s hard to imagine, but in 2011, in Panama City, another Floridian spring break capital, even an all-female jury found Girls Gone Wild founder Joe Francis not guilty on charges of emotional distress to four underaged girls who appeared in one of his company’s videos. If these women weren’t distressed before, some of them left the courtroom in tears after being questioned on the stand by Francis himself, who was acting as his own lawyer. Francis was found in contempt of court at one point in the trial, having asked one of the women if she was a prostitute. Resorting to tactics of emotional distress to clear himself of charges of emotional distress: is it tragic irony or dark comedy?

But to read about it in the cult of online public opinion, most people blame the girls. Never mind that signing contracts while drinking free beer is standard practice for Girls Gone Wild, or that these women were underage when they signed them. People want to blame the women as though they were truly in a strong position to make choices they wouldn’t regret. And yet in life, we can’t all play it like Selena Gomez did with James Franco. Caught between sun and booze and youth and friends and so much confusion…sometimes it’s just too hard.

In February 2013, Girls Gone Wild filed for bankruptcy—Chapter 11, sadly. Chapter 7 is the real bankruptcy, where they liquidate your stuff. Chapter 11 is the fake bankruptcy that corporations file when they want to keep making money while financially regrouping and taking cover from their creditors (Las Vegas casino creditors, in this case). In other words, at Spring Break 2013, it’s business as usual for convicted child abuser Joe Francis and Girls Gone Wild.

Even if the women on "Backroom Casting Couch" were all paid their rumored couple grand (not nearly enough—that’s what you’d make as an unknown in a fully clothed print modeling campaign for some completely non-sexual product, at least in New York), and even if these women are aware that their “audition” is a video that involves sex for a website, it’s still pretty obvious that there is at least partial reality to the scenario being played out on camera—the scenario of being talked into certain sexual acts—operating on a “let’s see how far it can go” basis.

Elizabeth Hawkenson, a.k.a. “Libby,” the now renowned Arizona State University freshman who reached the pinnacle of Internet fame thanks to her "Backroom" video, probably didn’t expect to go so far as doing anal on that fateful day in Scottsdale. There’s a certain deer-in-the-headlights look that comes only with the reality of being a deer in headlights, and if you’ve seen the video, you know that the facial expression of bewilderment during the final money shot is something that just can’t be feigned. She nervously smiles and flashes her ASU student ID for the camera, so we know where to find her, something no seasoned adult in a normal state of rational thinking would ever do. But she is not a seasoned adult. Still, somehow those who judge and seek to shame such women ridiculously expect that at the arbitrary age of 18, naiveté instantly transforms into experience.

As it turns out, there is no universal demarcation line. Such videos operate on a coercive pattern of saying yes to simple things until you find yourself saying yes to more and more complicated things, resistance and critical thinking shut down, and you find yourself caught in a stream of “yes” without thinking to paddle against the current in the opposite direction. Eighteen-year-olds, as Elizabeth Hawkenson was at the time, are particularly porous to this type of influence, having far fewer years of experience in the world. Most people make bad decisions in the process of finding themselves right up through their mid-20s, and for Girls Gone Wild and "Backroom Casting Couch" alike, these young women are an easy target.

To be sure, Hawkenson had no idea what level of Internet celebrity might come out of her youthful moment of poor choices. Meanwhile, young stars like Selena Gomez have media professionals surrounding them, helping them to adjust as best as one can to the phenomenon of being known, which is a more gradual process than it may outwardly appear. But to become an overnight meme via an amateur porn video—when prior to that you were just a teenage geology student—and to suddenly be famous to the point that your name is a Google Hot Trend? That’s a consequence no one could ever be truly prepared for. This girl wasn’t ready to “be hard” or “pretend like she’s in a fucking video game,” like the girls in Korine’s movie chant. It’s just sort of how it all happened, that’s all.

We send these women to the cyberspace guillotine and participate fully in their public shaming, when in fact we very much desire to see bikini-clad young Disney stars. Or non-Disney stars: they’ve made millions for Joe Francis. If we didn’t want to watch it, it wouldn’t be a fantastic PR move for these actresses or Korine’s film; no one would be doing it. Elisabeth Hasselbeck and the ladies of The View are right to express concern for the teenybopper fans who see their Disney heroes spring breaking. After all, when these famous actresses choose to publicly display their sexuality, they’re lawyered-up with expert agents, managers and PR people weighing in on their career decisions and how each facet of their public images will be handled. Gomez, Hudgens, Benson and all the ladies of Seth MacFarlane’s “We Saw Your Boobs” have teams of people watching their backs as much as their breasts in the interest of defending an investment in these women’s careers, and when you have William Morris or CAA, do you even need a condom?

But the young women who go down to spring break and find themselves at a party with a Girls Gone Wild camera crew don’t have a backup team. The young women who find themselves on Eric Whitaker’s "Backroom Casting Couch" don’t have a backup team either. Real or fake, whether they get paid or not, these young women show up at some strange crappy porn office alone and they leave alone. That’s why it’s so hard to think of the young fans of Gomez, Hudgens and Benson taking this film’s hypnotic images of sex and debauchery into the fabric of their subconscious: because if they should explore their sexual power publicly in the same way as the stars they love, no one will be there to back them up. They will do the things they’re scared to do and be the fall girls for America’s projections alone.

It is a great American disaster that our society continues to punish women like Elizabeth Hawkenson and the underage stars of Girls Gone Wild videos, smugly asserting that they should have known the consequences of their actions, believing that they got what they deserve, delighting to push the filth a little further from ourselves and our society by pinning it on someone else. But I for one am delighted that at least in the dirty world Harmony Korine mirrors back to us in Spring Breakers, a pair of disturbed, shaken and stunning young ladies in a stolen orange Lambo manage to make a comparatively clean getaway.