According to police officials, the 11 dead include five members of Pakistan security forces and six civilians 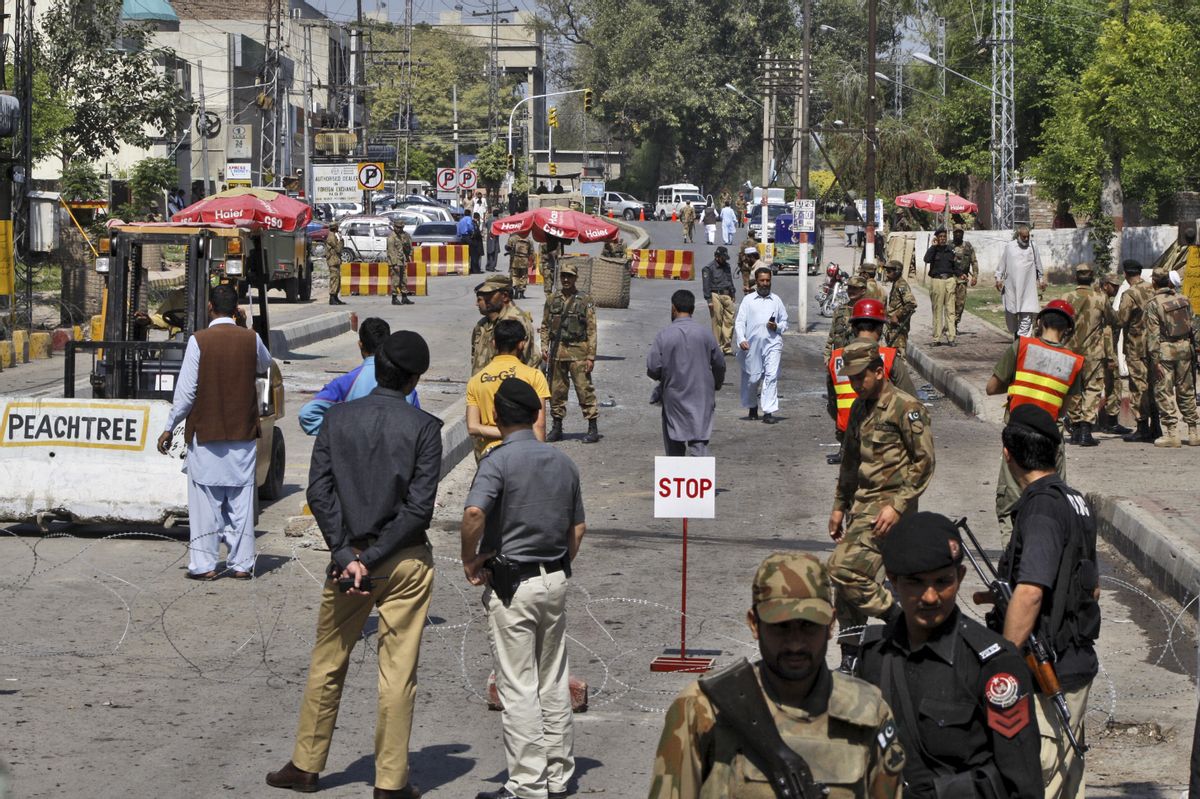 A suicide bomb blast near the U.S. consulate in Pakistan’s Peshawar killed 11 people and injured another 22, Friday, police said.

According to the local media reports quoting witnesses, a suicide bomber rode to a security check post at Sadar area within the Peshawar cantonment and detonated the explosives laden in his vest.

"It was a suicide attack, the target was the FC commander," police official Arshad Khan told the AFP news agency.

The attack occurred when the convoy of Frontier Constabulary commandant Abdul Majeed Khan Marwat was passing through the check post, which is just a third of a mile from the U.S. consulate. The attacker detonated 22 pounds of explosives. The commandant escaped without serious injuries, but his vehicle was damaged and four of the Frontier Constabulary personnel were among the injured, the Press Trust of India (PTI) reported.

The civilians included two women, a young girl and a four-month-old infant. Another 22 people were wounded.

The injured are apparently undergoing treatment in Lady Reading Hospital and a military hospital.

Marwat told the media that his was convoy was the target of the attack. The Pakistani Taliban has claimed responsibility for the attack.

The group's spokesman, Ahsanullah Ahsan, told the Associated Press that they carried out the bombing because the paramilitary police "are part of a system we don't recognize, and second, they are operating against us."

In August 2010, then Frontier Constabulary commandant Sifwat Ghayur was killed in a similar suicide attack on his convoy in the same area.

Khyber Pakhtunkhwa, of which Peshawar is the capital, is target of such frequent attacks from the militant groups including the Pakistan Taliban.

In a separate incident Friday, an angry lawyer threw a shoe at former Pakistan president Pervez Musharraf, when he was heading towards a court room to face legal cases filed against him.

Musharraf, returned to the country after four years of self-imposed exile, to contest in the upcoming general elections. However, he faces multiple charges including his alleged involvement in the 2007 assassination of former Pakistan Prime Minister Benazir Bhutto.

As Musharraf was walking down the hall way in the court building in the city of Karachi, an unidentified lawyer tossed a shoe against the former president. The shoe did not hit Musharraf.

Following the incident, the judge gave Musharraf an extension of pre-emptive bail in three cases filed against him.

The former president shares cold vibes with the law fraternity in the country following his decision to suspend the chief justice of the Supreme Court while he was in office.

Musharraf, who returned to Pakistan, Sunday, Mar.24, is seeking to revive his political party despite threats to his life from the Taliban and a possible arrest on the legal cases, if found guilty.