From Billy Crystal's pioneering role on "Soap" to "Ellen" and "Modern Family," TV has made gays seem normal 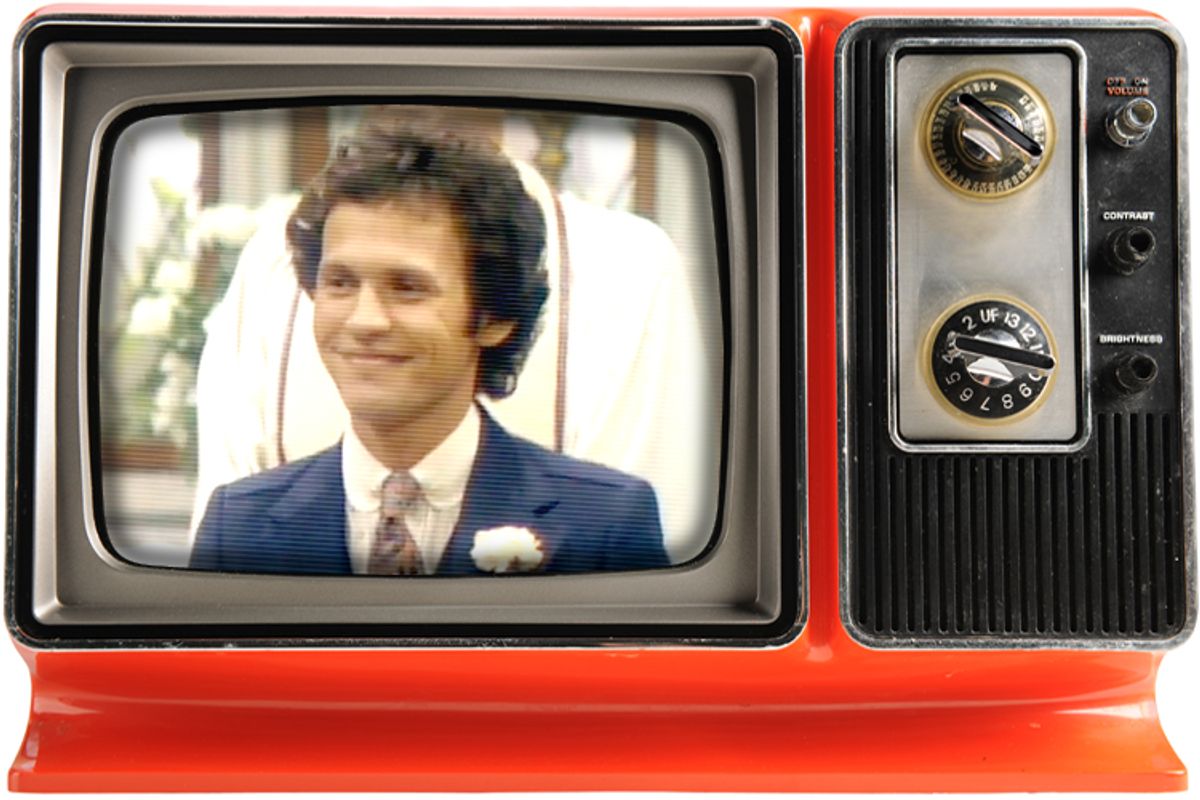 Did gay and lesbian characters on TV (and to a lesser extent in the movies) help pave the way toward acceptance of gay marriage and this spring’s potential Supreme Court landmark? So Vice President Joe Biden said last year in his possibly strategic endorsement of same-sex marriage on “Meet the Press”: “When things really began to change is when the social culture changes. I think ‘Will & Grace’ probably did more to educate the American public than almost anybody’s ever done so far. People fear that which is different. Now they’re beginning to understand.”

I’m a fan of Biden’s, more or less. (Here’s my unsolicited advice on 2016, Joe: Don’t do it!) But that may have been the only time anyone ever described “Will & Grace” as educational, and Biden is engaging in a classic Democratic Party, pro-Hollywood fence-straddle here on the effects of culture. A popular and vaguely liberal sitcom gets credit for driving social change in a positive direction, but violent media bears no responsibility for real-life violent crime. (Conservatives are at least more consistent, if also more consistently wrongheaded: Pop culture has pernicious effects all the way around, and is turning us all into slutty divorced gay mass murderers.) No, the two things are not parallel, and the general point the veep was struggling to make is valid. But “Will & Grace” marks only one minor milestone in TV’s 30-odd-year struggle with representations of sexual identity, during which the box has served both as an agent and a mirror of social change.

Society and media have a circular and cyclical relationship: As LGBT activists have pushed for equality and visibility, and political realities on the ground have shifted, media representations of gay people have both responded to those changes and also helped to nudge them along. Personally, I have no doubt that the biggest single factor that has driven social change on this issue is that almost all the straight people in America have gotten to know someone gay over the last 20 or 30 years, and have not found them fundamentally alien. Whatever biblical disapproval or personal distaste for homosexuality you may feel, your spouse’s gay nephew or the lesbian in Accounting probably strikes you as a normal-ish person, not inherently more obnoxious than others.

But I think it’s equally true that TV has played a crucial role. As any media scholar will tell you, what we know about the world from our real lives and what we experience on TV tend to reinforce each other, and at the level of deep psychology we don’t necessarily tell them apart. Over that same time period some of the “gay friends” America has gotten to know, along with the somewhat clownish New York stereotypes of Will Truman and Grace Adler, range from Sandra Bernhard’s character on “Roseanne” to the late Pedro Zamora on “The Real World” to the ubiquitous Ellen DeGeneres, all-purpose lesbian gal-pal to every straight woman in Middle America. That’s without getting into the many other semi-normal gay characters on “Dawson’s Creek,” “Buffy the Vampire Slayer,” “Six Feet Under,” “Modern Family” and “Glee,” to cite a few, or prominent gay show-runners like Alan Ball, Greg Berlanti and Marc Cherry who have reshaped the medium in recent years.

My own personal awakening on the issue of homophobia, and what equal rights for LGBT people might really mean, goes way back to the fall of 1978 – the year of the Briggs Initiative, Harvey Milk and Billy Crystal on “Soap.” I grew up in California, which became a gay-rights battleground that year when a Republican legislator named John Briggs sponsored a ballot measure that would have barred openly gay people (and possibly even people who weren’t gay but belonged to pro-gay organizations or participated in gay-oriented events) from teaching in the state’s public schools. The initiative started out with overwhelming support in public-opinion polls but was decisively rejected in the end, thanks in large part to a campaign led by Milk, the pioneering San Francisco supervisor, along with teacher and future politician Tom Ammiano and many others urging gay Californians to come out to their friends, family and co-workers. It was an inspiring lesson in human nature (of which I generally take a dim view): The question of whether you wanted “those people” teaching your kids abruptly shifted when “those people” included somebody you knew.

That election began to turn the tide against the national wave of anti-gay legislation launched by Anita Bryant in Florida. In fact, I think you can argue that a slow but inexorable logic of equality began to kick in at that moment: Once you back away from actively depriving one group of people of their rights, from purposefully ghettoizing and marginalizing them, you eventually have to face the question of why they don’t have the same rights that others do. We were still a very long way from same-sex marriage in 1978, but the process that led us toward this spring’s Supreme Court case, both in terms of LGBT community activism and mainstream opinion, started there. And then came a huge shock: About three weeks later, Milk was assassinated in his City Hall office (along with Mayor George Moscone, a straight supporter of gay rights) by a tormented right-wing rival, in a crime that seemed far too loaded with symbolic meaning.

I was a high school student at the time, living in the self-congratulatory liberal enclave of the San Francisco Bay Area. No one I knew supported the Briggs Initiative (or at least admitted to doing so), and I had a few friends who I realized were probably gay, although none of them had quite come out. In theory, I was totally OK with homosexuality, although the pinnacle of hipness at that moment was bisexuality, understood as a glitter-rock, freaky-fabulous, David Bowie phenomenon. But then I watched Billy Crystal playing Jodie Dallas on “Soap” – a normal person, albeit in the middle of a farcical soap opera, who craved social equality and family acceptance – and realized that my attitude toward him was confused, uncomfortable and somewhat condescending.

There had been a handful of gay or gay-coded characters on TV before Crystal’s 1977-81 run on “Soap,” but nearly all had been presented as tormented figures, victims at best and predators at worst. Jodie might not pass p.c. muster in 21st-century culture; as I recall, he was a bit of a queeny stereotype, and no one ever accused Crystal of excessively subtle acting technique. But it was an entirely sympathetic portrayal that required considerable courage, and one that came early in the history of straight actors playing gay characters. I was evidently not alone in my viewing discomfort. In a 2002 interview with the New York Times, Crystal recalled how the studio audience would hoot and titter on the rare occasions Jodie had a (strictly PG-rated) intimate scene with another man, and the show became the focus of letter-writing campaigns and advertiser boycotts from conservative Christians. But by the end of the show’s run, when Jodie became involved in a child-custody battle, the audience was overwhelmingly on his side.

Especially in those days of three-network dominance, TV was the most democratic and the most unapologetically mass-oriented of all media. “Soap” was ahead of its time, since it would be several more seasons before a prominent gay character returned to prime time (the female-coded zone of daytime TV was actually better, though that would require its own history). But “Soap” gave us a first draft of something TV would increasingly present over the ensuing three-plus decades: A vision of American society in which lesbians and gays could be found almost anywhere and were defiantly regular people. They were asserting their right to be accepted and recognized for who they were and whom they loved, for sure. But they also weren’t some homogeneous group who could be cordoned off and classified, and in themselves they were just as lovable and/or irritating as anyone else.

From “Soap” to Ellen DeGeneres to Richard Hatch on “Survivor” to the macho male couple who won season 4 of “The Amazing Race,” televisual images of sexual diversity have gradually moved away from victimology and “gay best friend” stereotypes toward a “normalizing vision” of LGBT culture. This simultaneously reflected the lived experience of many or most Americans and also projected the mainstream and middlebrow sensibility of television onto the whole society. As GLAAD’s annual reports on television make clear, LGBT characters on dramas and sitcoms are overwhelmingly white, wholesome gay men and lesbians, rather than, say, transgender HIV-positive youth of color. If Christian conservatives who once complained vociferously about every gay-positive show have been virtually driven out of the TV conversation, so too has the much smaller population of “queer radicals” who advocate a separate and distinctive LGBT culture. While the startling public shift on gay marriage – something few people of my generation, straight or gay, thought they’d ever see -- is not solely the product of TV, it represents the ultimate fulfillment of TV’s vision of sexual equality. Harvey Milk may have had a much broader vision of social change in view, but gay marriage is exactly the revolution Jodie Dallas wanted.