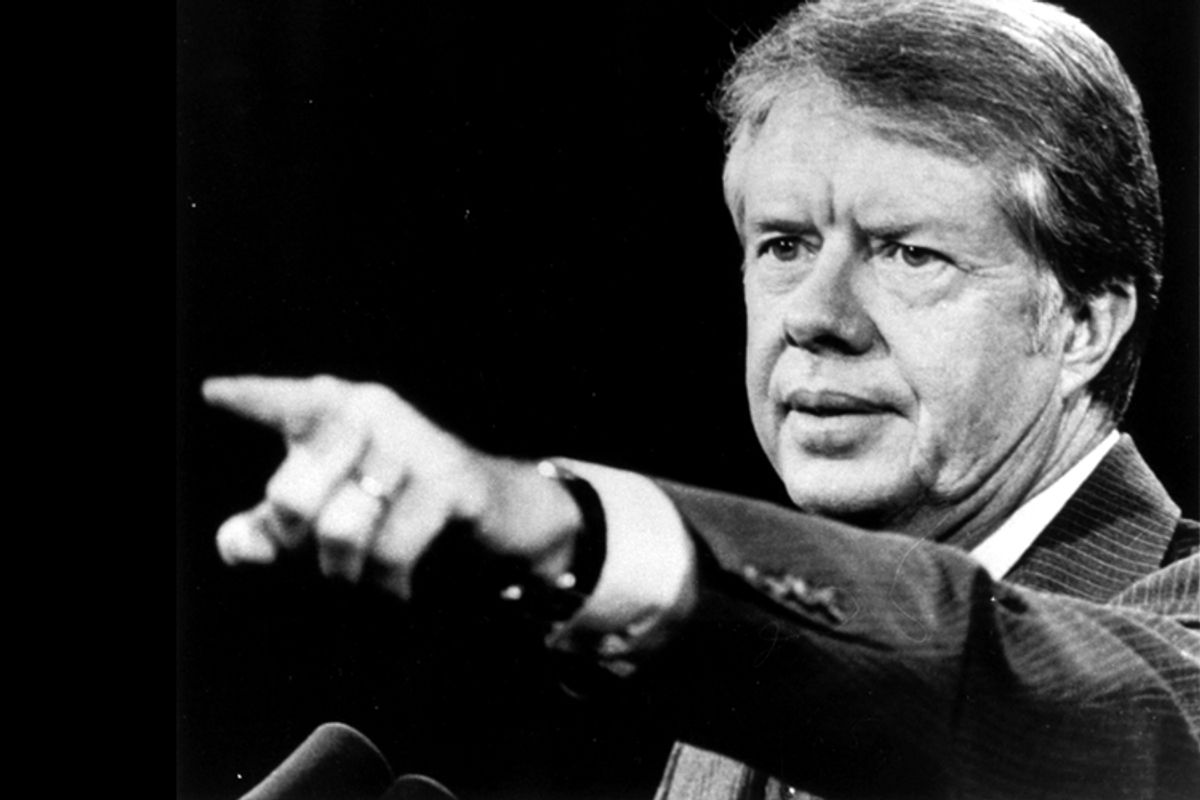 Jimmy Carter had significant impact on judicial selection in several ways. The first involved the Supreme Court. The fact that he had no Supreme Court appointments made it easier for President Reagan to build directly upon the four appointments made by President Nixon to thwart Warren Court decisions expanding minority and criminal defendants’ rights at the expense of state sovereignty.

An obvious target for Reagan was the Supreme Court’s 1973 decision in Roe v. Wade. Initially, there was no Republican backlash to the opinion. Indeed, the initial, public response to Roe was largely silence. When, for instance, the Senate held confirmation hearings on President Ford’s nomina­tion of John Paul Stevens to replace the retiring William O. Douglas, not a single senator asked Stevens about  Roe. Yet, by the time Reagan was campaigning for the presidency, the Republican platform had called for overruling Roe; and as president, Reagan made Roe a principal example of the Court’s liberalism and pledged to appoint justices who would overturn Roe, among other cases. The question is what had happened in the meantime.

The answer is Carter. Carter opposed abortion himself and did not pub­licly defend Roe. Throughout his presidency, he consistently opposed federal funding for abortions. At the same time, he was determined to diversify and improve the quality of the federal judiciary, which led him to put more people on the bench who were actually supportive of Roe. When Reagan condemned this practice and intensified his criticism of Roe, Carter made no response. The silence was deafening. It left Roe largely undefended (except by some Democratic congressional leaders) in public debates during the 1980 presi­dential election. Reagan largely occupied the void and co-opted some of Carter’s base, which had voted for him in 1976 because of his Evangelical Christian background. Carter was left in the awkward position of having his reelection depend on people who supported Roe but were unhappy with Carter because of his failure to vigorously support it. His pro-life convictions opened the door for the Republican Party to become the anti-Roe party, and the Democratic Party, partly by default, became the party of Roe.

The ensuing dynamic was ironic since the Court had decided Roe 7–2, with four members of the majority appointed by Republican presidents. This fact was not lost on Reagan’s advisers, who understood that two of the four Republicans in the Roe majority (Justices William Brennan and Lewis Powell) were Democrats appointed by Republican presidents. Reagan was convinced that more care had to be taken to ensure that future justices would hew closely to the party line. Carter’s reelection defeat coincided with a loss of Democratic control of the Senate that made it easier for Reagan’s first three Court nominations to be confirmed by Republicans who wanted them to overturn Roe.

Meanwhile, Carter’s clashes with the Senate over his lower-court appoint­ments had several consequences. The first involved senatorial courtesy. In fact, Carter is only one of two presidents who at the outset of their presidencies directly challenged senatorial courtesy on judicial appointments, though he had no more success than the first president who tried — Herbert Hoover. On entering office, Hoover had declared that he intended to end the practice of awarding judicial appointments based on senatorial courtesy and instead vowed to raise the standards and requisite qualifications for lower-court ap­pointments. He met with swift opposition from Republican senators who did not want to relinquish their chance to dispense favors to important constitu­ents. Without their support, Hoover had little chance for the Senate to con­firm his judicial nominations, since liberal and Progressive senators were disposed to oppose his nominations. Things got worse for Hoover, as the resistance to his reforms and judicial nominations intensified over time. He eventually abandoned his objectives.

As a candidate and shortly after becoming president, Carter and At­torney General Bell proposed radical reforms of judicial selection. They announced a plan for Democratic senators to use merit selection panels to assist them in recommending highly qualified, more diverse nominees for federal district and circuit court judgeships. Carter’s initiative met resis­tance from many Democratic senators, including the chair of the Senate Judiciary Committee, James Eastland. Eastland’s opposition ensured that Carter’s proposed legislation to create merit selection panels never made it to the floor of the Senate. In response, Carter decided to act alone, and he issued an executive order establishing his own nominating commissions for circuit court appointments. He urged senators to set up nominating commissions for district court judgeships. In time, there were panels in over thirty states. Nevertheless, many senators refused to establish com­missions, and their relationships with Carter degenerated over the remain­der of his presidency. Carter’s decision to bypass the Senate with his executive order reinforced the president’s unilateral authority over judicial nominations and limited senatorial courtesy more than ever before, but the consolidation of his authority over judicial nominations alienated Senate leaders, including Ted Kennedy, who blocked Carter’s national health care legislation in the Senate and later unsuccessfully challenged him for the 1980 Democratic presidential nomination.

Carter’s judicial appointees provide an additional benchmark against which other presidents’ choices are measured: The average age of his circuit court appointees was fifty, younger on average than those of any prior pres­ident. Subsequently, the average ages of the circuit court appointees of each of the next four presidents were increasingly lower. The pattern was no ac­cident as each of these presidents recognized the growing importance of appointing relatively young people to the federal courts of appeal because they would be able to serve actively as the last resort for a relatively long time after the presidents who appointed them left office and would provide a deep bench from which the next president(s) of their parties could pick Supreme Court justices. Barack Obama is the only president after Carter to appoint circuit judges whose average ages have at least thus far exceeded those of Carter.

Third, Carter is often singled out as a major reason for the apparently broken state of federal judicial selection. Many conservatives blame Carter for beginning the “politicization” of judicial selection in the modern era by appointing so many judges who favored making federal courts the engines of social change. They have similarly charged every subsequent Democratic president with the same objective — namely, in their view, to pack the courts with people eager to implement liberal policies and values through their decisions. Indeed, the clashes between Carter and the Senate over his appointees foreshadowed an important shift in the appointment process: The approval rates for the judicial nominees of every president since Carter have gone progressively down from a high for Carter (at 92 percent for his district and for circuit court nominees to just below 70 percent for President Obama’s lower-court nominees as of the end of March of his third year in office).

Fourth, Carter’s judicial appointees have influenced constitutional law, two especially. One was Columbia law professor Ruth Bader Ginsburg, whom President Carter appointed to the U.S. Court of Appeals for the District of Columbia. The other was Carter’s last circuit court appointee, Harvard law professor Stephen Breyer, who had been majority counsel to the Senate Judiciary Committee under Chairman Ted Kennedy. Both served as appellate court judges for more than a decade before President Clinton elevated them to the Supreme Court, where they have been stal­wart members of its liberal wing.