Top 5 investigative videos of the week: Inside the smog capital of the world

From China's most polluted city to Tahrir Square in Cairo, a look at the best YouTube has to offer 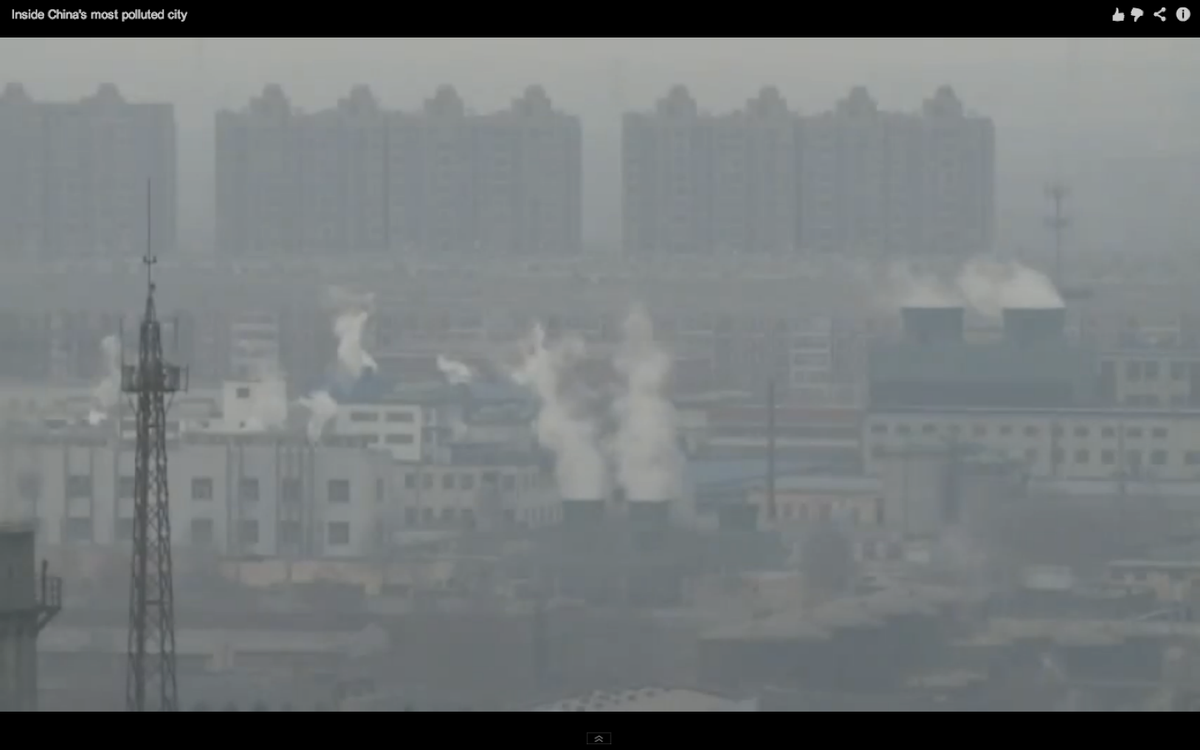 Scene still from "Inside China's Most Polluted City"
--

In the news this week: women fighting for their safety and rights in the Arab Spring, the fraud behind those calorie counts on your favorite foods, and smog so hideous you can see it from space.

In a continuing partnership with Salon, the editors of The I Files are highlighting our picks for the best investigative videos that illustrate and illuminate what's happening in the world.

For more stories like these, please take a moment to subscribe to The I Files channel, YouTube’s one-stop news source. You’ll get a first look at the best videos from all of the major news outlets and select independent producers without the hassle of having to sift through the YouTube clutter. Subscribing is free and causes no damage to the environment.

This story highlights a shocking and unintended consequence of the anti-government uprising in Egypt – the routine sexual assault of women who are attempting to protest in Cairo’s Tahrir Square. A video captured by a bystander shows a particularly disturbing mob attack on a female protester. A few in the crowd attempt to rescue her, even resorting to flamethrowers to try to push back the mob. This story is especially personal for reporter Bridgette Auger, who was attacked by some 100 men as she filmed in Tahrir Square last year.

Despite the efforts of women to speak out about their experiences, such assaults are becoming increasingly common and more violent. Some conservatives in Egypt are blaming the victims, saying women brought the violence upon themselves by daring to protest alongside men in public. Some activists charge that the attacks are organized and used as a weapon by those who feel threatened by women breaking out of traditional gender roles.

“It’s a silencing tool, and it’s effective,” one man says. “It’s like a tear gas bomb.”

Reports emerged earlier this week that a surprising number of immigrants arrested in the U.S. are being held in solitary confinement, often for weeks at a time. According to Immigration and Customs Enforcement officials, on any given day, about 300 immigrants are held in solitary isolation, even though they have been arrested on civil charges and are not considered a danger to others. The U.S. has been criticized for using solitary confinement in its prisons more than any other democratic country in the world.

This reminded me of a striking story done by Mother Jones last year, in which former hostage Shane Bauer visited the supermax Pelican Bay State Prison in Northern California and filmed his impressions. Bauer was held in solitary confinement for four months in Iran’s infamous Evin Prison after he was arrested while hiking along the Iran-Iraq border with his fiancée and a friend in 2009. But the conditions Bauer observes in California are, in his opinion, much worse than anything he experienced in Iran. He finds prisoners who have been relegated to long-term solitary confinement, held indefinitely because they have been accused of being connected – often tenuously – to prison gangs. Men can be found guilty of gang association merely by possessing banned literature or writing about prisoners’ rights. Bauer wonders how he would have fared during his incarceration in Iran if his cell had been as bleak as the ones he finds at Pelican Bay.

Earlier this year, Defense Secretary Leon Panetta (who retired in February) lifted the long-standing ban on female soldiers serving in direct combat units. It was a historic change. But in all the fanfare, one crucial fact was overlooked: Some women already had been serving in active combat units, though their contributions largely have gone unrecognized and unacknowledged by those back home.

“Lioness” chronicles one all-female unit that was involved in some of the heaviest counterinsurgencies battles of the Iraq War. Made up of mechanics, supply clerks and engineers, the Lioness unit was recruited to work alongside Marines to help defuse tensions with civilians, but its members wound up becoming the first women in U.S. history to be involved in direct ground combat, in violation of federal policy at the time.

This excerpt follows a reunion of the Lioness battalion and recalls some of their hairiest moments of the war. It’s worth watching to the end to see the reaction of one female soldier after she was inadvertently left behind during a firefight on the front lines.

Concerns about the safety of China’s drinking water were raised this month after more than 16,000 dead pigs were found floating in rivers around Beijing. Air pollution levels also have been setting off alarms – China’s smog is now so thick that it actually can be seen from space.

This Channel 4 News piece goes inside one of the most polluted cities on earth: the town of Shijiazhuang, about 180 miles south of the capital, Beijing. This city of more than 10 million people suffers air pollution that is literally off measured charts, a situation so bad that residents have taken to calling it the “airpocalypse.” The thick, ever-present smog seems to permanently coat the entire city, and you can almost taste it through the screen. One fed-up resident finally fights back and confronts workers at a neighboring coal-burning power plant that spews soot into his home. There is some hope in a new computer app that activists use to publicize air quality readings and allow concerned citizens to challenge the government’s whitewashed pollution numbers, but it’s hard to imagine the air clearing anytime soon.

Have you ever wondered about the accuracy of the calorie counts listed on your favorite foods? In this New York Times Op-Doc, filmmaker Casey Neistat takes this question to a science lab and, using a process that is “incredibly complicated and horribly boring,” he tests the calorie content of a day’s worth of meals. Two food scientists, 10 hours and one “calorimeter” machine later, he has his answer (though I won’t spoil it here). Perhaps it’s not surprising that several of the labels are inaccurate – but it’s eye opening to see just how far off some of the calorie counts really are. I especially appreciate the use of The Donut as an official measurement of inadvertently consumed calories.