Jimmy vs. Jimmy: The late night battle to come

The future looks a lot like a latter-day Letterman vs. Leno gutter fight. But here's what Fallon has over Kimmel 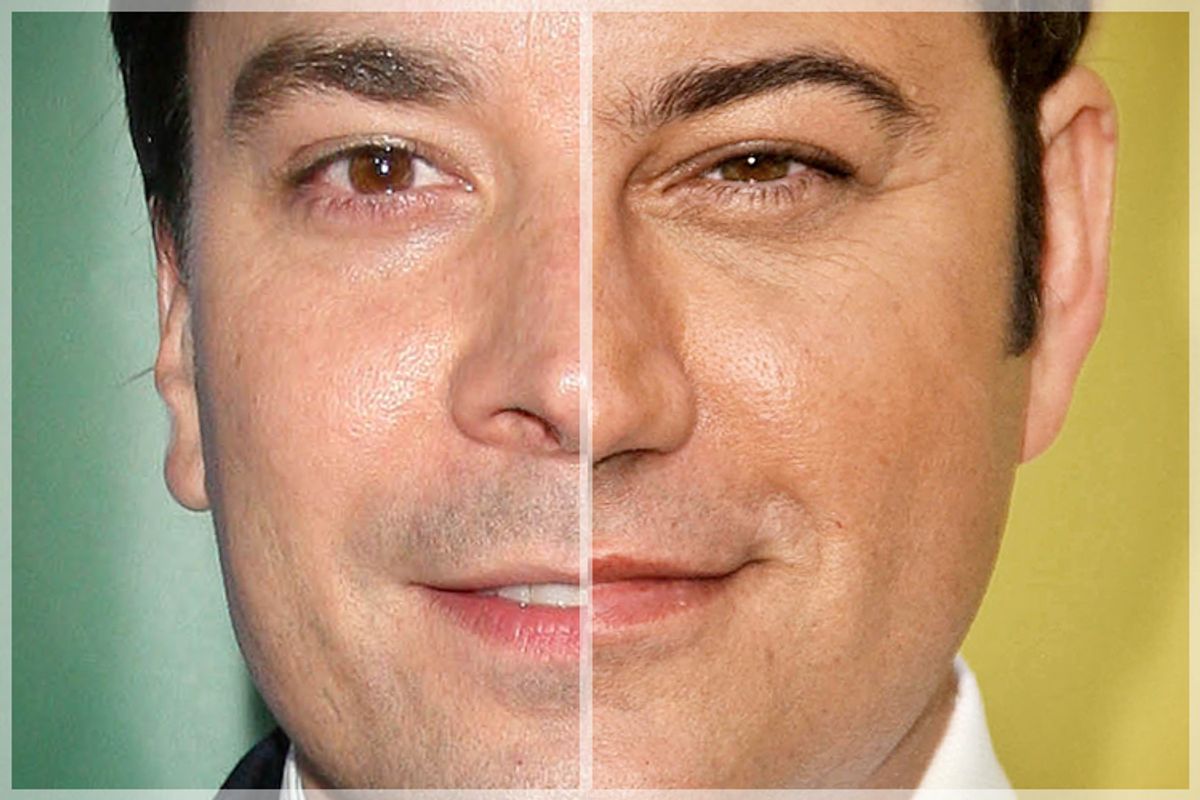 Late night television is like a pleasant backing track, inoffensively lulling you to sleep at night, until every so often it violently scratches and forces you to pay attention to it. Last week, it let out a shriek. Rumors began to fly that NBC was going to oust Jay Leno from “The Tonight Show” and replace him with “Late Night” host Jimmy Fallon, a move that will set up a whole new late night landscape. At some point in the not so distant future, the Jimmys Fallon and Kimmel, with their respective cadres of celebrity friends and knack for viral videos, will take over for Leno and Letterman as the dueling supernovas of the late night firmament.

The Leno-Letterman rivalry, which, unlike the incipient Fallon-Kimmel rivalry, has a lot of personal animosity behind it, has long since coalesced into a narrative: Leno is popular and a hack. Letterman is popular and not a hack. Leno is the choice of the masses. Letterman is the choice of the slightly more discerning viewer. Leno has a chin. Letterman has irony. Letterman may be on CBS, but Leno is the CBS-type property, hugely popular but no good, the late night equivalent of “Two and a Half Men.”

Despite Leno’s ratings, Letterman’s influence has been in ascendance on late night TV for a long time: Most late night hosts are striving to be a very popular acquired taste like Letterman, as opposed to just a very popular taste like Leno. Conan O’Brien and Chelsea Handler have their individual quirks, but both are crafted more in Letterman’s persnickety, singular image than they are in Leno’s. Jon Stewart and Stephen Colbert appeal to a passionate wedge audience, rather than a mass one, but by having opinions, occasional hauteur and a well-developed sense of irony they are more Letterman-like than Leno.

But no one is more indebted to Letterman than Kimmel. Letterman is Kimmel’s hero and he slags Leno any chance he gets. Kimmel has a bigger streak of bro in him than Letterman, a leftover from his time hosting “The Man Show” and a little more of a straight-ahead troublemaker vibe. When Kimmel hosts an awards show, you know he’s going to get in some digs. When Letterman hosts an awards show, his digs may be more of the “Uma, Oprah” type.  Like Letterman, Kimmel’s prickly, but he's also less intimidating —  a little more accessible, human, nerdy. When he stands and delivers his monologue, he looks a little fidgety in his body, like he doesn’t know what to do with his hands. He seems inside and outside the experience of hosting simultaneously, which is a pure Letterman-ism.

The outlier in the sphere of Letterman influence is Jimmy Fallon. Fallon, unlike Letterman and more like Leno, is a people pleaser. Fallon is not an acquired taste, he's pure sugar.  In a profile of him for New York magazine, Adam Sternbergh argued that Fallon has specialized in  “the comedy of unabashed celebration.” Fallon, who since his time on “SNL” has been a profligate giggler, wants us all to giggle together.

Letterman, Leno and Kimmel occasionally make fun of people. Kimmel recently did a segment asking folks on the street what they made of the new pope, who hadn’t been selected yet: They offered a wide variety of ridiculous made up opinions. (“What do you think of the pope’s ex-wife” was one question that was answered seriously.) Fallon would never do a segment where regular people, no matter how deserving, were the butt of the joke.

Another way to say this is, Fallon is edgeless. Edgelessness is, of course, one of the major critiques of Jay Leno, but Fallon, who is even more edgeless than Leno, more eager never to hurt or offend, has put a positive spin on this quality. Fallon’s goofball enthusiasm is much more infectious than Leno’s. His sweetness seems genuine, not as with Leno a sort of neutering, a decision to play it safe, to hold back on all the cutting things he could say. He has turned his show into a rambunctious safe space for celebrities to be silly and audiences to enjoy watching them be silly. Also, Fallon has the Roots, who have enough edge to balance him out. The Roots have done so much for Fallon’s “Late Night,” which is as much a variety show as a talk show, and one of the major things is to be the bass to Fallon’s frenetic falsetto, comprising the part of the show that will play “Lyin’ Ass Bitch“ when Michele Bachmann comes out onstage.

Kimmel's act has been field-tested, and it works. It's a slightly distanced approach to showmanship, an occasionally bemused, often puncturing, dry and clear-eyed serving of comedy that wrings a lot of laughs from the ridiculousness of others. Fallon gets a lot of laughs from his own willingness to be ridiculous. Even Kimmel's most successful, funny, good-natured, celebrity-laden bits, like "I'm F*!king Ben Affleck," are more incidentally transgressive than whatever Fallon gets up to. But what Fallon has done in his short tenure at “Late Night” is still more original: He has convinced audiences he is as hip as Letterman by being even more inviting than Leno, while singing and dancing more than both.

Fallon’s shtick has its limits. Last week, in the midst of the hubbub about him taking Leno’s spot, he made a joke about the new pope. “Experts say they are looking for someone to embrace the diversity of the church and lead Catholics into the digital age … So it’s gonna be another old white guy.” In the context of the late night reshuffling — where, yes, it’s gonna be another white guy; network television, still convinced America needs to be lulled to sleep by Daddy — this is edgeless to the point of cluelessness. Kimmel would have seen this trap, and made the next joke about the world of late night TV. But for 20 years we’ve been watching network late night hosts whose expertise resides in exactly this sort of comedic sharpness, who rarely miss the joke or the skewer. Fallon’s joy jamboree is comparatively soft.

As we head into a future full of Jimmys, I wonder if Fallon's style is sustainable. In 15 years, when he’s not a member of the ascendant pop culture generation, will his unfettered enthusiasm still be adorable or hacky? What will Fallon's youthful exuberance seem like when he's going gray?  Or if he doesn't have the Roots backing him up? It's a lot harder to make excitement seem cool than disdain, especially over the long haul — just ask Leno. But for now, Fallon's up to something more unique than Kimmel. I think Kimmel's late night success is a pretty sure thing: he's good at his job, and good at his job in a way we have come to expect from late night hosts. But by imitating Letterman so faithfully, I wonder if he won't end up ceding Letterman's cool kid cred to Fallon, who is daring enough to be a happy guy after dark.