Zombies, giants, dragons: The third season of "GOT" begins 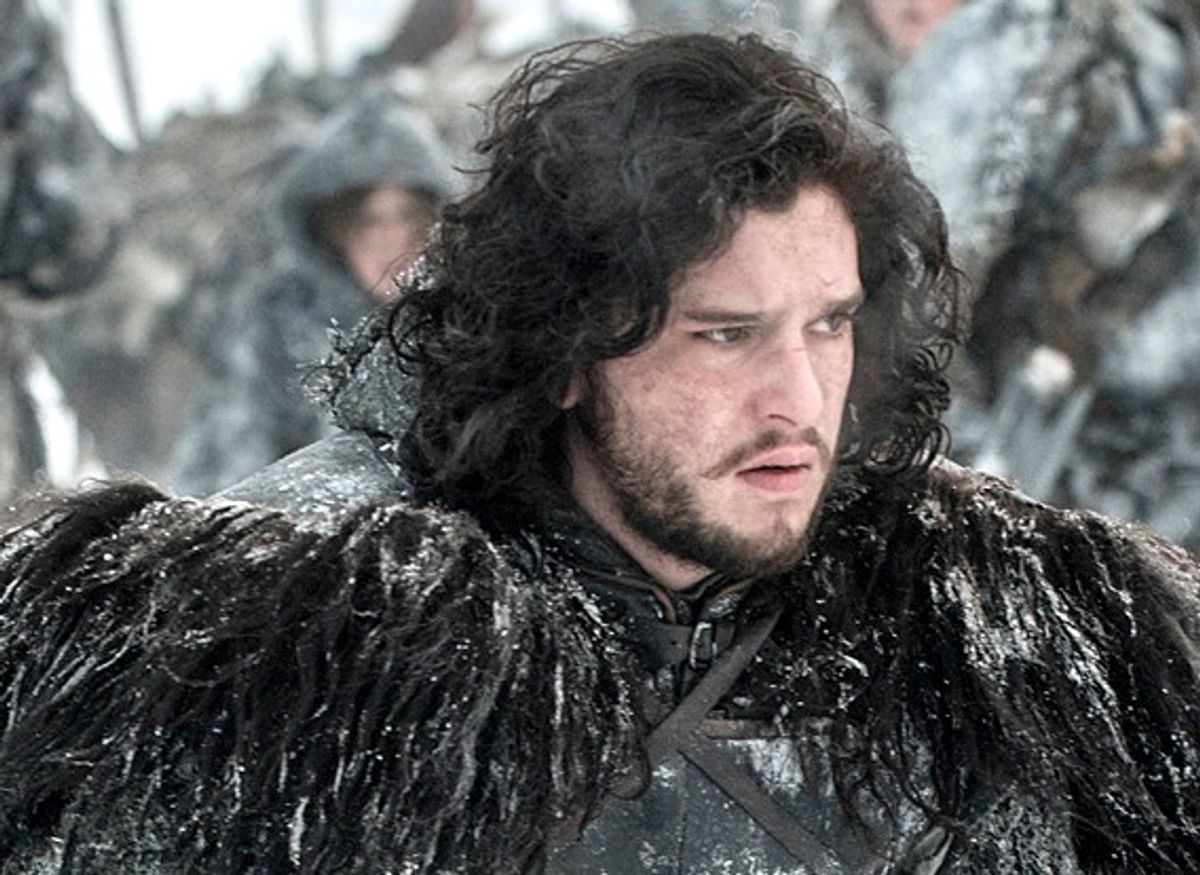 “Game of Thrones” is upon us once again, and in addition to being a warning not to stare too long at giants, the first episode is a set of riffs on how — and how not to — position oneself in relationship to power. What’s the best way to get close to a king? Jon Snow, overdressed in black fur, needs to make an impression on the King Beyond the Wall, Mance Rayder (Ciaran Hinds). First he tries fealty, gets laughed out almost into the snow by a warrior who chomps rodents straight out of the fire, before settling on the appropriate tone to woo wildings: feisty flattery. “If I’m a traitor then you are too,” he tells Rayder, a former member of the Night’s Watch, who turns out a little susceptible to negging. But Jon follows that up with a macho compliment: “I want to fight for the side that fights for the living. Did I come to the right place?” He sure did.

Significantly less comfortable with the neg is Stannis Baratheon, the least charismatic of all potential kings, who is coping with his loss at the Battle of Blackwater by moping and letting the sorceress Melisandre burn people alive. (Speaking of burning people alive: I think of the episode’s early shot of a zombie crawling through the snow while on fire as a kind of rejoinder to “Walking Dead” that “GOT” can do horrifying special effects too.) When Davos, dappled with sun blisters, tries to pry Stannis from Melisandre’s influence, he gets tossed into the dungeon himself. Direct approaches, as Tyrion Lannister will soon demonstrate, do not seem to be the most effective ways to get with power: manipulation works better.

Davos was much better treated by his pirate pal Salladhor Saan, who not only rescued him from a castaway’s death, but ended up giving him a ride to Dragonstone even though Salladhor sensibly wanted to avoid locations where the powers that be are burning people alive. This is another of the episode’s major theme: the virtues of friends and associates vs. family. Given how terribly relatives treat each other throughout this episode —Tyrion and Cersei hissing at each other, Tywin doing such a number on Tyrion it’s like he was daring Freud to appear, and Robb and Catelyn’s continued impasse — it seems everyone would be better off with relationships born in self-interest, that flower into something more feeling. Salladhor’s favor for Davos, Bran and Tyrion’s friendship, and Shae’s concern for Sansa are all kinder connections than the ones made of shared blood.

Siblings Cersei and Tyrion are a case in point. She drops in on him in his reduced circumstances. He initially fears she’s trying to kill him. She’s really just there to insult him and make sure he’s not planning to mention the whole incest thing to their father. (Aside: I really loved Lena Headley’s line reading about the 9-year-old she had beaten. “If I remember correctly, she never stole a necklace again,” she said, ending with a very creepy for being very genuine little laugh.) She tells Tyrion he’s not as clever as he thinks, and he counters that still makes him cleverer than her, a position the rest of the episode bears out.

Certainly, when it comes to controlling the monstrous Joffrey, Margaery Tyrell is running laps through sewage-filled alleys around Cersei, and all she can do is watch and make nasty, toothless mother-in-law remarks about Margaery's outfit. Margaery is my favorite character in the early episodes and not just because the actress who plays her, Natalie Dormer, appears to have stolen Lauren Bacall’s eyes. Why be good or canny, when you can be both? Margaery may be more cunning than kind, but it’s impressive to see her use charm, charity and midriffs to greater effect than cruelty, violence and intimidation. She so outmatches Joffrey I would feel bad for him, if he were not the worst.

Tyrion isn’t having a much better time of it than his sister. He straightforwardly asks his father to be made the heir of Casterly Rock and for his troubles is roundly abused, called ill-made and spiteful, and thrown out the door. “I will be consumed by maggots before I make you heir to Casterly Rock,” is how Tywin puts it. Here’s hoping there are some ambitious maggots (last seen in this episode of “Buffy”) close at hand.

Tywin’s response speaks to one of the episode's other questions: What do you do once you have power? Can you avoid being awful? Tywin’s gone the full-asshole route, Stannis the full malevolent sad-sack one. Rob continues to keep his mother locked up because that’s what he would do if she weren’t his mother. Daenerys, who is beginning her morph into full-on heroine, has to figure out if she’s willing to buy, and therefore condone or at least accept, the deeds of a bunch of baby-murdering slaves who don’t flinch when you trim off their nipples. The dangers of being a leader with a soft heart are immediately revealed to her, when the cute little girl Daeny’s making faces at turns out to be an assassin.  (Which introduces another highly effective way of getting in good with the powerful: make like Selmy Barristan and slay the nasty poisonous spider trying to kill her.) Do leaders — and everyone else in this universe — have to harden their hearts? Is there some other way to survive? Let's see.