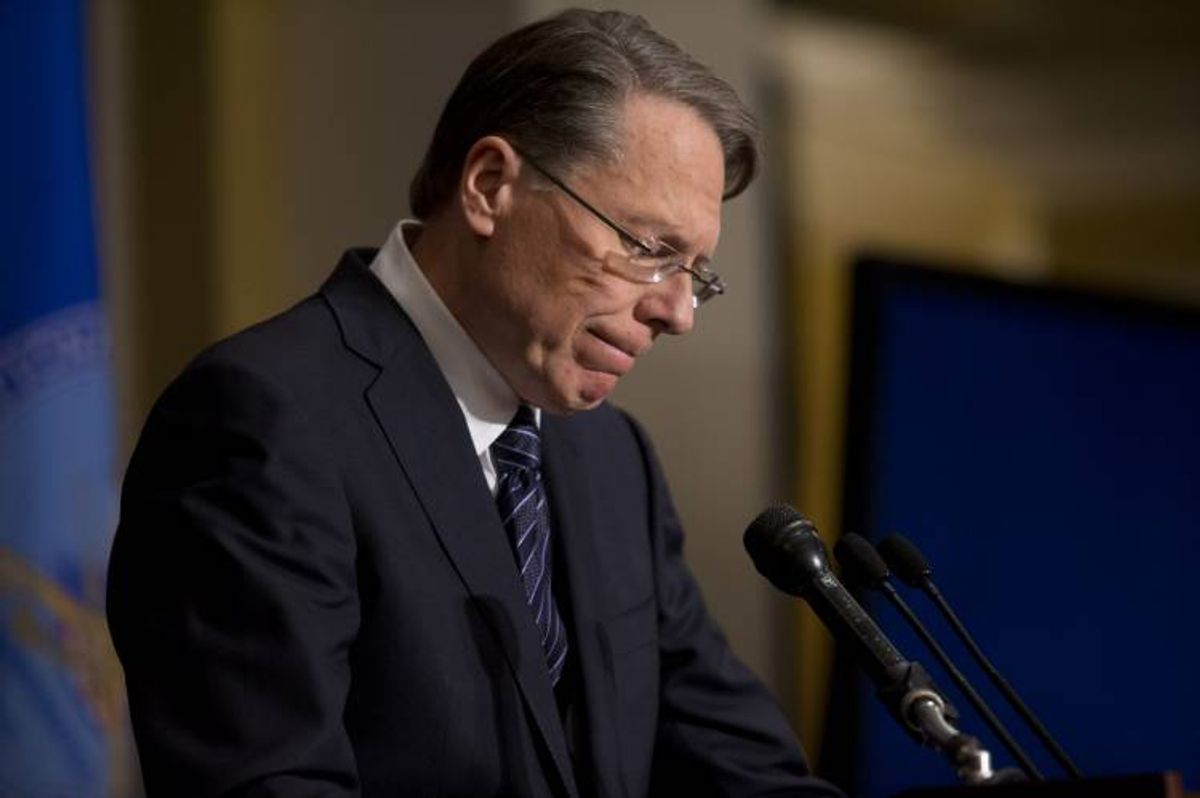 Every so often, disparate political events line up so perfectly that they create the possibility of real resonance. In these fleeting moments, a point which might have been lost to news cycle noise can break through and singularly shift momentum by introducing a new angle to an otherwise binary debate. President Obama's Wednesday visit to Colorado could be one of those moments, thanks to the events surrounding his gun-control-themed trip.

In its preview story of the political week ahead, the New York Times notes that the president is "seek(ing) to regain momentum" on the gun issue as "a filibuster threat is growing in the senate" and as a two-week congressional recess is marked by a nationwide activist push by the National Rifle Association. To counter it, the president is heading to Colorado, a state made famous by two of the most high-profile gun massacres in history - and now the first state in the historically pro-gun West to pass serious gun regulations.

If that was all that was happening, this week might not hold much political potential. But in a coincidental turn of events, the president's visit will occur at the very moment the Colorado Republican Party is making a high-profile effort to derail Democratic legislation that would disarm domestic abusers. That, of course, allows Democrats to portray the GOP as extreme on the gun control issue, to connect that specific issue to the Republican Party's war on women - and to connect it in a state that has electorally punished the GOP for that war.

In terms of just sheer extremism, if ever there was a succinct, simple-to-understand bumper-sticker-ready metric for understanding the fringe-iness of today's Republican Party, the fight in the Colorado legislature over gun rights for domestic abusers is it. As the Denver bureau of the Huffington Post reports, the Colorado bill in question simply "prohibits gun possession from those convicted of certain felonies involving domestic violence or certain misdemeanor crimes of domestic violence (and) also prohibit guns from individuals subject to certain (domestic violence) protection orders." According to a recent statewide poll in Colorado, that is a concept supported by 80 percent of voters - yet Republicans are opposed.

To truly appreciate the radicalism of that opposition, understand that longtime federal law already technically bans most of this. According to the New York Times, however, that federal statute "is rarely enforced" to the point where in 2012 prosecutors were willing to invoke it fewer than 50 times. In light of that negligence, state legislation to reaffirm the federal law would seem to be an easy way to do as the Republican Party so often rhetorically demands and better enforce existing gun statutes. Yet, that same GOP is nonetheless taking the side of domestic abusers and opposing the state legislation on the grounds that the restriction "is ripe for abuse."

What's amazing - and what evokes Democrats' "war on women" meme - is the fact that Republicans don't seem to see that what's really "ripe for abuse" is guns in the hands of domestic abusers.

According to data compiled by the non-profit Futures Without Violence, "nearly one-third of all women murdered in the United States in recent years were murdered by a current or former intimate partner"; "of females killed with a firearm, almost two-thirds of were killed by their intimate partners"; and "access to firearms increases the risk of intimate partner homicide more than five times more than in instances where there are no weapons." Likewise, the Violence Policy Center reports that "for every time a woman used a handgun to kill an intimate acquaintance in self-defense, 83 women were murdered by an intimate acquaintance with a handgun."

Because of these facts, it should be no surprise that polls show women are disproportionately sympathetic to the gun control argument. It should also be no surprise that because of the obvious connection between domestic abuse and firearm violence, banning domestic abusers from owning firearms can have demonstrably positive results. For instance, as the New York Times reports, "a study in the journal Injury Prevention in 2010 examined so-called intimate-partner homicides in 46 of the country’s largest cities from 1979 to 2003 and found that where state laws restricted gun access to people under domestic-violence restraining orders, the risk of such killings was reduced by 19 percent."

Put all of this together - the political dynamics, the "war on women" meme, the urgent need for the gun control legislation itself - and this week could be the start of a big shift in the gun debate and in the larger electoral struggle between the parties heading into 2014.

Think about it: the president is swooping in to the home of Columbine and Aurora to draw national attention to the gun extremism of the Republican Party - and he will be able to point right to the state capitol where that Republican Party is opposing legislation to simply enforce federal law that is supposed to be protecting women from gun-wielding domestic abusers. Not only that, he will be in the state where Democrats' have most maximized their inherent advantage with women.

That last point is significant. Out of all the swing states in America where political themes are test marketed, Colorado has been the one where Democrats' claim of a Republican "war on women" has most powerfully resonated at the polls. This is the state where the GOP lost an eminently winnable senate race in 2010 thanks to their candidate pulling an early version of Todd Akin and making hideously flippant remarks about rape. It is also the state where the GOP lost 9 eminently winnable electoral votes after the Obama campaign specifically hammered the Republican Party for its extreme positions on contraception and a woman's right to choose. Now, following the trend, it is a state whose GOP is using its legislative power to defend the alleged rights of domestic abusers to remain armed.

That's why, as mentioned before, President Obama's visit may not be just about this week - thematically, it may also be about beginning to make the Colorado political template the national Democratic Party's mid-term election template.

Party operatives clearly know that, as TalkingPointsMemo recently reported, polls suggest that "women who don’t usually vote in midterm elections will turn out in 2014 over the issue of guns." All those operatives need to realize that prediction is for Republicans to offer up some good ol' fashioned extremism. By opposing Democratic legislation to disarm domestic abusers right as a president is drawing national attention to the need for gun regulations, the GOP seems more than happy to oblige.