Jews are now works of art 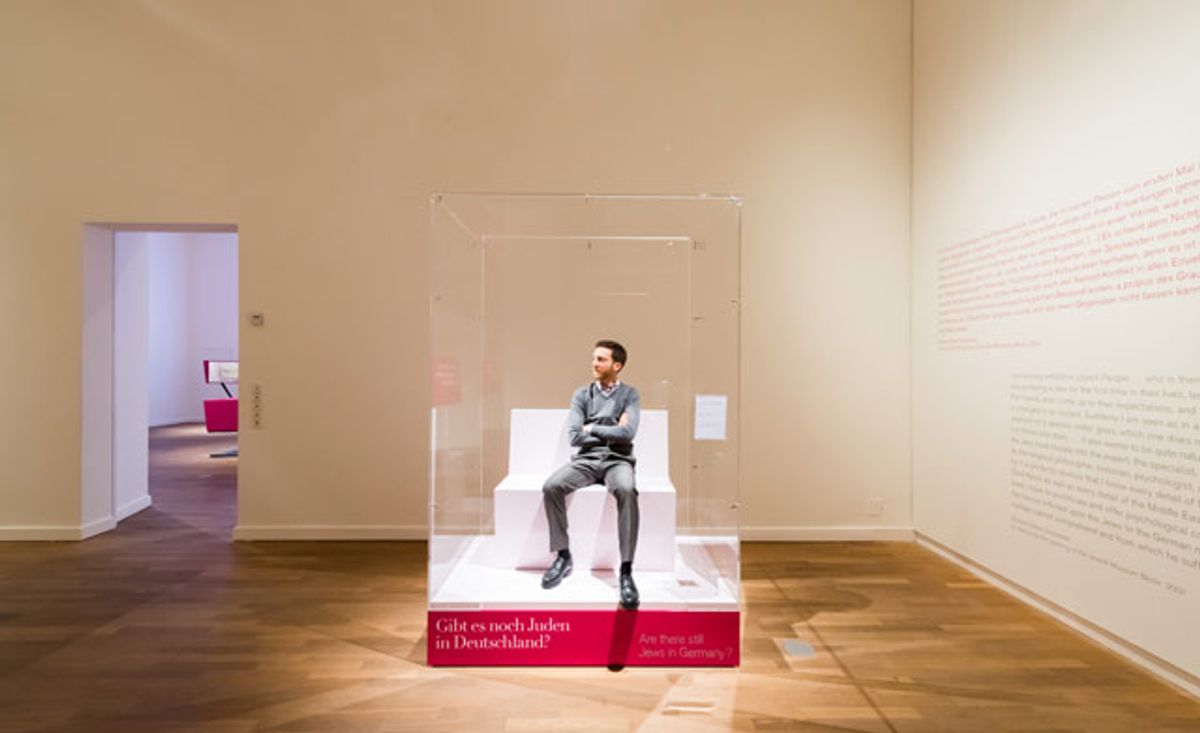 A few weeks ago, my sister was in the Passover aisle of her local supermarket when a woman came up to her and asked if she knew where the tahini was. She didn’t. The woman explained that it was always in this particular aisle but now wasn’t, which led my sister to explain that it had likely been moved because it isn’t kosher for Passover, which in turn led the woman to begin inquiring about Passover rules. That blossomed into a larger, nearly half-hour-long conversation about Judaism, with the woman asking lots of questions and my sister trying to answer them. “I did the best I could,” she told me. As anyone who’s ever been expected to represent their entire religion/race/ethnicity/gender/world view knows, it’s a pretty difficult task.

And yet this is what it seems random volunteers are being asked to do for an exhibition that opened at Berlin’s Jewish Museum a week and a half ago. The show, eye-catchingly called The Whole Truth … everything you always wanted to know about Jews, features such sections with such ridiculous titles as “How do you recognize a Jew?” — based on the accompanying display, the answer is apparently “by their head coverings” — and “Jews in a showcase.” The latter is more or less exactly what you might fear: a three-sided glass box with a bench inside, on which Jews will sit, one at a time, for the duration of the exhibition (through Sept. 1), answering visitors’ questions and responding to their comments. Step right up! See the Jews! Jews as spectacle.

It may be that Jews are already a spectacle in Germany, ever since World War II, when Hitler decimated their numbers (from 565,000 in the country in 1933 and to 37,000 in 1950). ”I feel a bit like an animal in the zoo, but in reality that’s what it’s like being a Jew in Germany,” Ido Porat, the first volunteer to sit in the box, told the Associated Press. “You are a very interesting object to most people here.” OK, sure, but do we really need to exploit that feeling by putting a bunch of Jews on display in a glass box (which the AP astutely points out is creepily reminiscent of the glass cage that held Adolph Eichmann during his trial in Israel)?

Still, it’s not even the Jew-as-spectacle that bothers me so much; it’s more the burden implicit in the display. As far as I can tell, there’s no statement in the exhibition that trumpets the answers of the volunteers as the end-all and be-all on questions of Judaism and Jewishness, but it’s hard not to suspect that many people are going to walk away misguided and misinformed. The AP reports one of Porat’s answers, for instance, to the question of what to bring to a Shabbat dinner. “He advised the would-be traveler that anything is permissible to bring to a Shabbat dinner as long as it’s not pork.” I’m afraid the real answer is a lot more complicated than that. (I grant that there’s a chance the article is distorting or simplifying the real exchange.)

I give the Jewish Museum credit for trying to open up a probably much-needed dialogue, but if it really wants to address contemporary Jewish life in Germany, it should be focusing on diversity and complications rather than playing into stereotypes — you shall know a Jew by his hat! — and offering inadequate answers to people’s honest questions. A plurality of voices does seem to be what the institution is aiming for, given this bit of the description of the show: “Throughout the exhibition, literary and documentary voices speak about Jewish identity today. Visitors will not receive simple or ‘right’ answers, but will hear a multitude of opinions varying according to the speakers.”

The problem is that they haven’t created the right conditions. A visitor won’t get the message of diversity unless she visits the exhibition many times, meeting different volunteers and talking to all of them. And giving the show such a sweeping title, in addition to organizing it around questions that play on widespread, often nefarious biases — another winner: “are Jews particularly good looking, influential, intelligent, animal loving, or business savvy?” — sets up the lonely Jew in the box to fail, to attempt to answer correctly when she doesn’t even know the whole truth herself.

The Whole Truth … everything you always wanted to know about Jews continues at the Jewish Museum Berlin (Lindenstrasse 9-14, Berlin) through September 1. If you go, let me know how it is.