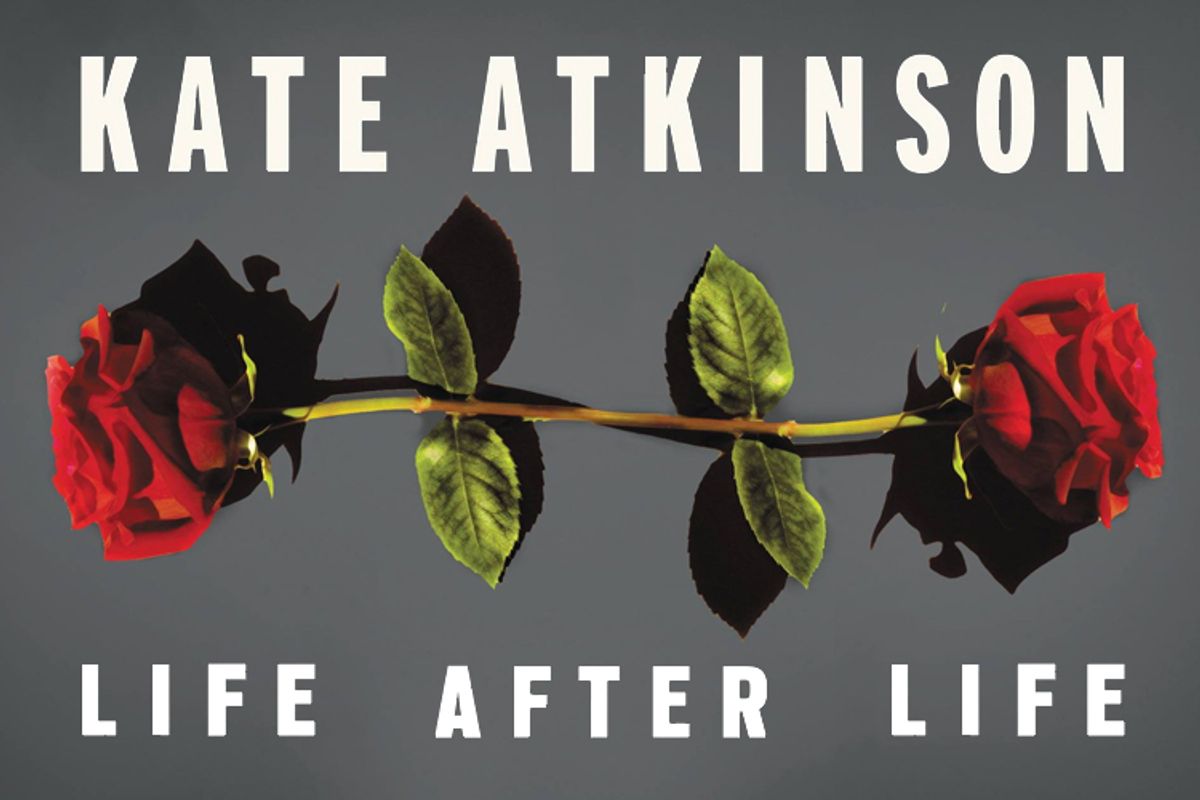 Why do so many time-travel stories unspool into confusion and triviality? Because time is what stories are made of and when you mess around with the main ingredient of anything, you better know exactly what you're doing. Kate Atkinson's new novel, "Life After Life," is not quite a time-travel narrative, but it does dangle before its reader's nose that most tantalizing of impossible offers, "a chance to do it again and again," as one character puts it, "until we finally did get it right."

Ursula Todd, the novel's main character, lives any number of lives in the course of the book. It's as if the providential force that commandeered Bill Murray's Feb. 2 in "Groundhog Day" has taken over her entire existence. She is stillborn in an English country house in 1910, or the doctor arrives on time and she survives. She drowns with her big sister, Pamela, during a seaside holiday at age 4, or they are both rescued by an amateur painter. She falls out a window the next year or, eluding that fate, succumbs to the influenza epidemic of 1918. Her various possible means of demise include domestic violence, the Blitz, suicide and a stroke. No wonder Atkinson gave her heroine a name that means "death" in German; the downside of getting a seemingly infinite number of chances at life is having to die an equal number of deaths.

In a fashion, we all probably enjoy (or suffer) the same endless spectrum of fates. Many physicists believe that separate universes branch off from every possible turning point in time, so that there's one universe in which you remembered to take your vitamins this morning, and a whole other one in which you didn't, ad infinitum. But every strand of this "multiverse" is utterly separate from every other, and that is not the case for Ursula. She doesn't have much recall of the different lives she's led, but she has some, enough so that she is occasionally able to redirect her own destiny. This makes her a bit spooky: "She has a kind of déjà vu all the time," her mother tells the psychiatrist the family consults during Ursula's adolescence.

As a result, "Life After Life" runs through several courses of Ursula's story until each comes to its terminus, then the novel starts over with a different one. Perhaps this sounds monotonous, like some hellish video game in which you've got to repeat a level again and again to make it to the next. That's not the case. "Life After Life" is a hypnotic dance of causality and chance, in which Ursula makes genuine progress. We see how a meek Ursula's life plays out when one of her boorish older brother's friends casually rapes her in the back stairway, and then we get the version in which she's seized with a powerful urge to clock him the minute he gets fresh. Each iteration shows her to be more self-possessed, more in charge of her own life (as the cliché goes) -- but that doesn't necessarily lead to a "better" outcome. Meanwhile, Ursula moves toward that inevitable time-traveler imperative, the one that gave its name to a "Doctor Who" episode: "Let's Kill Hitler."

Atkinson is best known for her Jackson Brodie series, beginning with "Case Histories" and extending over three more novels: crime fiction in a sense, but also not. Over the course of those books, Atkinson developed an impressive mastery of intricate narrative structures, the detective novelist's legerdemain and misdirection married to the literary novelist's fascination with character and emotion. "Life After Life," while a completely different sort of book, displays the same trapeze-artist panache, releasing plotlines into the oblivion of one past life only to retrieve them, to the reader's appreciative gasps, in a later one.

Nevertheless, "Life After Life" is far more than a game or a stunt; it's rich in the gravity and texture of reality. Ursula's childhood, an idyll only later appreciated as such, radiates with the particularities of sibling spats, beloved pets, baffling adults. The truncated life in which she marries a vicious English control freak is a cameo of quotidian despair. In a later sequence, having wed a German lawyer during a European tour, Ursula and her little daughter are befriended by Eva Braun and spend a few weeks as her guest as Berghof, which gives them a jaundiced domestic view of Hitler and his circle. In yet another life, she serves as a warden during the Blitz, bonding with a motley crew of volunteers as they pull bodies, living and dead, from the wreckage of bombed-out London buildings. A dozen or so indelible characters -- a feckless bohemian aunt, a moody married lover, a tarty neighbor with a line on black-market goodies, the unflappable retired hospital matron who runs the wardens, the naive Eva, Ursula's splendidly awful older brother and endearingly level-headed sister, the family's xenophobic cook, and so on -- come and go, play major roles or minor ones, and always register as marvelously vibrant.

In some of her lives, Ursula is a wife and mother. In others, she's a spinster who works her way up the ranks of the civil service. In one life, she achieves a tender first love, but in another, less romantically fulfilling iteration, she saves the life of a friend. Sometimes she retains a flicker of innocence through the war, and sometimes what she endures and achieves transforms her into the sort of stiff-upper-lip trouper who mutters, "No point in thinking, you just have to get on with life." Some of her lives are pathetic; others are heroic and and still others are merely ordinary and happy, but every choice she makes inevitably precludes some other option. There is no way to finally "get it right."

The problem inherent with a time-travel premise is that the possibility of infinite do-overs drains the stakes out of the character's actions; any undesired result can be easily corrected, so nothing really counts. "Hindsight is a wonderful thing," a friend of Ursula's remarks. "If we had it, there would be no history to write about." (What she means is if we could know the consequences of our actions in advance, we'd make sure nothing bad ever happened.) But what Ursula comes to understand is something different: No single life, however faultlessly executed, can completely realize the potential of the person who lives it.

Rather than diminishing us, this irrevocability gives even the most modest human story a kind of grandeur. Atkinson makes every one of Ursula's lives, as well as the lives of those she touches, feel inestimably precious. Instead of nothing mattering, everything does.