Abortion bans in N. Dakota and Arkansas looked like wins for "pro-lifers." But the movement is deeply divided 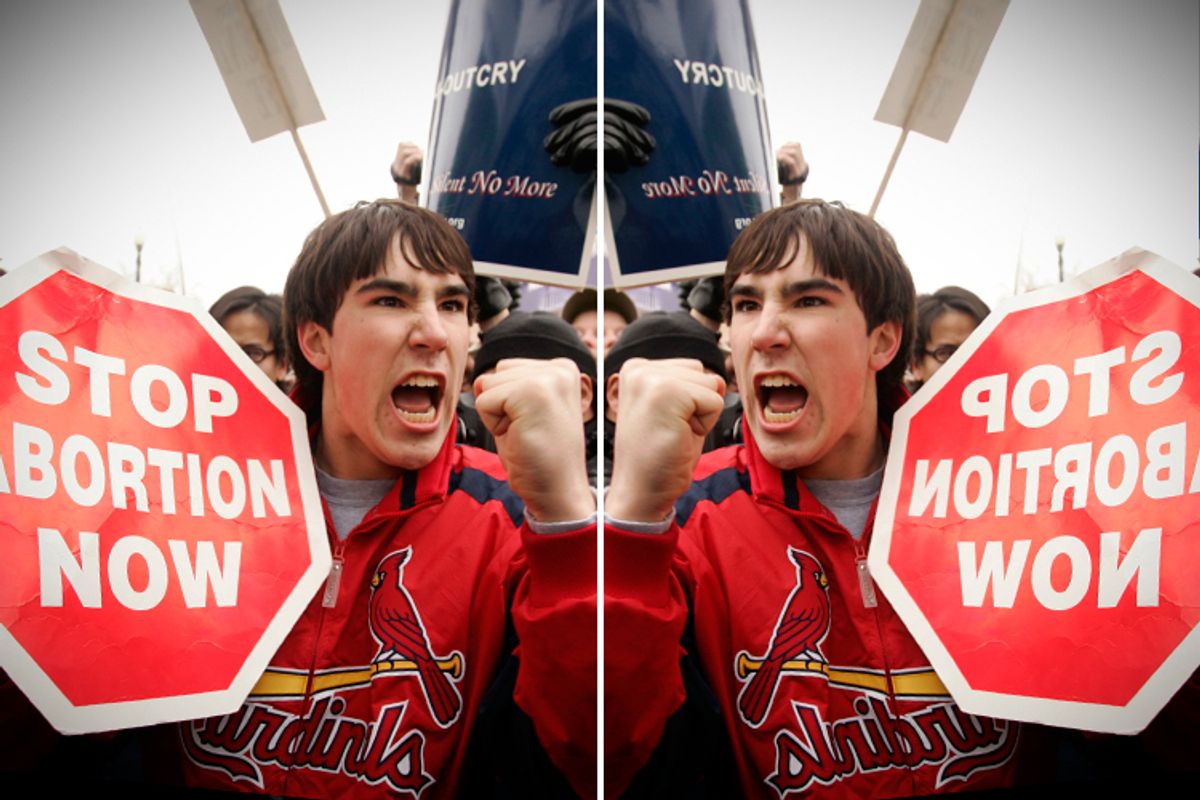 Some antiabortion activists were crowing about their apparent victories in North Dakota last week -- including an unprecedented ban on abortion at six weeks, before most women know they're pregnant -- but, notably, that's not what Peggy Noonan wanted to talk about on "Meet the Press" yesterday. When Chuck Todd asked her if such legislation "could be what motivates evangelicals again," Noonan promptly changed the subject. It was no accident.

"The real story this week is the haunting and disturbing story of this doctor in Philadelphia -- [Kermit] Gosnell, who is being tried this week," she said, adding, "This was a man who had an abortion mill, that was in fact a death mill for babies essentially born. Being tried now, we'll see how it goes. But this is a story that is haunting, about the implications of decisions made by courts." (In fact, Gosnell is accused of crimes that have never been sanctioned by any court, and appears to have been exploiting gaps in access for low-income women.) The point was this: Noonan, in keeping with the bigger antiabortion groups, doesn't want to talk about banning abortion in the first trimester, when it is overwhelmingly supported by Americans. They would rather change the subject to grislier, rarer, later procedures. Too bad for them that a growing number of state legislators aren't getting in line.

For years, a civil war has been brewing in the right-to-life movement, between the absolutists, who want to pass Personhood amendments and "heartbeat" bans that grab headlines, and the careful incrementalists, who are mounting a long-term campaign to stigmatize abortion and make it inaccessible through seemingly common-sense restrictions. Jack Dalrymple, the governor of North Dakota, clearly falls into the former camp: "Although the likelihood of this measure surviving a court challenge remains in question, this bill is nevertheless a legitimate attempt by a state legislature to discover the boundaries of Roe v. Wade,” he said in a statement when he signed several unconstitutional antiabortion bills. The same thinking applied in Arkansas' Legislature, which passed a 12-week ban over the objections of the governor, who pointed out it would just be dismissed in court.

They're wrong, of course. The Supreme Court has repeatedly held that you can't ban abortions before viability. That's why the incrementalists hate this stuff -- which they, probably correctly, point out just galvanizes pro-choice people.

Jim Bopp, the general counsel of the National Right to Life Committee since 1978, has been blunt about laws like the ones passed in North Dakota and Arkansas: "Useless and potentially dangerous." In a 2007 memo, Bopp, who is also special counsel to Focus on the Family, plainly laid out the strategy for overturning Roe v. Wade and banning abortion everywhere. "The Supreme Court’s current makeup" -- which hasn't substantively changed since Bopp was writing -- "assures that a declared federal constitutional right to abortion remains secure for the present. This means that now is not the time to pass state constitutional amendments or bills banning abortion." Why? It would be a waste of money at the risk of courts strengthening abortion rights, especially if the Court decided to reiterate its support for abortion rights by saying it's protected by equal protection under the 14th Amendment.

The memo is a work of astonishing frankness. "The pro-life movement was energized by Roe in 1973, but wise leaders recognized from the beginning that one of their foremost tasks was to keep abortion alive as an issue," Bopp writes. His preferred strategy: Electing as many "pro-life" leaders as possible, while slowly chipping away at abortion rights and public support for them. "A vital battle stratagem is to choose proper terrain — favorable to you, unfavorable to your foe," he wrote. "To change the hearts and minds of the public on abortion, it is necessary for pro-lifers to frame the debate to their advantage. Pro-life leaders have wisely focused on this strategy." The key example: "The debate over partial-birth abortion has furthered this strategy because it has forced the proabortion camp to publicly defend a particularly visible and gruesome practice." Indeed, when the issue came before Congress, 17 Senate Democrats voted for the ban, which restricted a rare procedure.

Given Americans' complex feelings on abortion, the political strategy here is to appear "reasonable" and render the other side extreme. Most Americans do not find six-week abortion bans particularly reasonable. So what are the absolutists after, besides scoring easy points with their base? Well, for one thing, court cases take years to wind their way through, and if Republicans somehow manage to capture the presidency in 2016, they could shift the Supreme Court math in their favor. That seems to be what Mathew Staver of Liberty Counsel was getting at when he said of pro-choice litigators, "They ought to hold off on their celebrations. The cases have a long way to go through the court system."

There's another game going on here, called out by Talcott Camp, deputy director of the ACLU's Reproductive Freedom Project, in an interview with the AP: "I don't believe these bans are going to take effect, but the danger is that they make the other laws look reasonable." Indeed. How much have you heard about North Dakota's requirement to make abortion providers have admitting privileges at a local hospital versus the sweeping bans? There's more than one way to get to "reasonable."